If there’s a common message to young people in a pair of videos posted at the United Church of Christ’s National Youth Event web page, it’s this: You may face struggles, but don’t be afraid to “follow your passion” for good in the world. And don’t be afraid to start now.

Billed as part of the larger NYE experience, which will culminate in live online events July 25-26 (see related story), the videos premiered alongside live-chat sessions held in May and June. 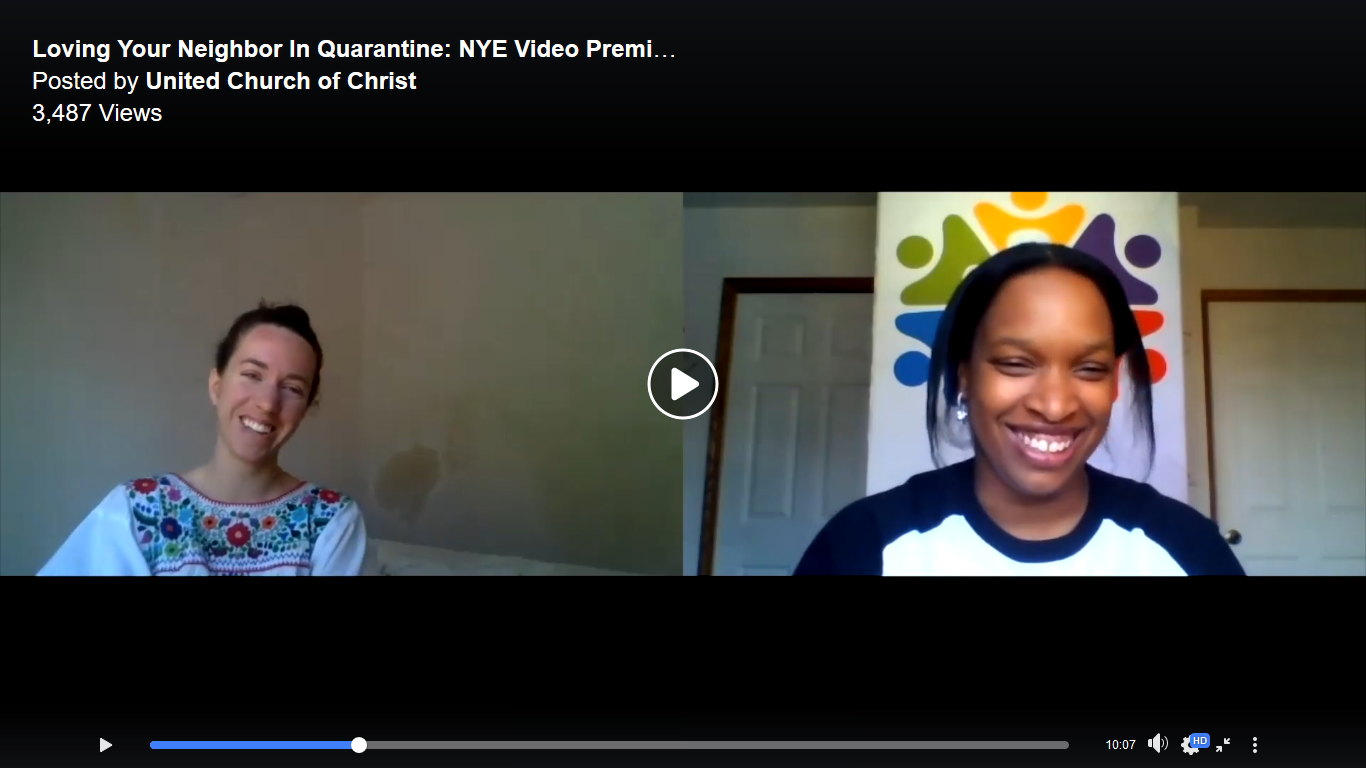 Their titles are “Loving Your Neighbor in Quarantine” and “Creativity and Justice in Quarantine,” but they are filled with conversations about a wide range of personal journeys. They feature a freight train ride in Mexico at age 23, a coming-out experience at age 26, a protest organized at age 12, and an online   to put words to a hip hop beat.

‘Moments in life when something grabs you’

In “Loving Your Neighbor,” musician and border activist Natalia Serna of Nogales, Mexico, also known as La Muna, describes traveling through Mexico on a freight train with a group of migrants when she was 23. Like all those appearing in the two videos, Serna was scheduled to participate  this month at the in-person version of NYE until the COVID-19 pandemic forced its postponement.

“At NYE I would have focused on the spiritual gifts that migrants often develop in their journey and how these are so valuable for our everyday lives, whether we are migrating or not,” Serna said by email. She was still able to share one song in her   but focused more on stories. “I spoke of my own spiritual journey and how the border and migration has been foundational in my growth towards Christ,” she said.

“There’s moments in life when something grabs you … just, like, prints you for life,” she says in the video. “The way that I saw people interact, and how they migrated, and how people had this incredible solidarity for each other – people that they don’t really know. I think that was what was most captivating to me.”

Her yearning “to understand who is Christ, what is Christ about” led her to work with migrants on the U.S.-Mexico border, she says. “I feel like the border really smacks you in the face with so much pain, so much brokenness, so much impotence, so much rage about the injustice in the world.”

“Believe in yourself,” she says. “I really think that young people are under so much noise, so much distraction by social media, so much comparing their lives to the lives of others, it is hard to really tap into yourself and tap into the power that you have to do good.”

‘Keep pushing us to be more passionate’

Also in “Loving Your Neighbor,” the Rev. Rhina Ramos connects her experience as an immigrant to the “traumatic experience” of coming out as a lesbian at age 26. At the time, she held a lay leadership role in “a very conservative, fundamentalist, born-again, evangelical Baptist church of Latinos.”

As an El Salvadoran who often felt out of place in much of U.S. society, church had been a place where she could belong. Her coming out happened “by the grace of God,” she says, but it meant leaving her church – and that felt like “a destruction of my entire life.”

The good news, she says, is that a series of experiences led her eventually to seminary and to become the founding pastor of Ministero Latino UCC in Oakland, Calif. She now also heads Proyecto Encuentro de Gracia y Benvenda, a national UCC project that “seeks to open doors for the LGBTQI community in Latinx UCC churches as well as support the radical embrace of Latinx within historically Euro descendant UCC churches.”

“Always do what makes you passionate in life and you will not miss out,” Ramos advises young people. She also says they have particular gifts in “pushing for change.” “Keep pushing us to be more passionate, more open in our heart,” she urges.

‘Never too early to start’

One person who tapped into that power – starting when she was 12 – is Zyahna Bryant of Charlottesville, Va., now an antiracist organizer and student at the University of Virginia. She appears in the “Creativity and Justice” video.

She describes the first public action she organized, while in middle school, protesting the 2012 death of Trayvon Martin – and surprisingly drawing 200 participants to her city’s federal courthouse. Later she started the Charlottesville High School Black Student Union.

Now she works on issues such as the removal of statues of Confederate officers and “getting more Black and brown students into honors and AP courses” in area schools.

“Love yourself, love your community,” she advises listeners. “Also, there’s never perfect time to start [taking action]. … I started at a very young age. It’s never too late to start, it’s never too early to start.” 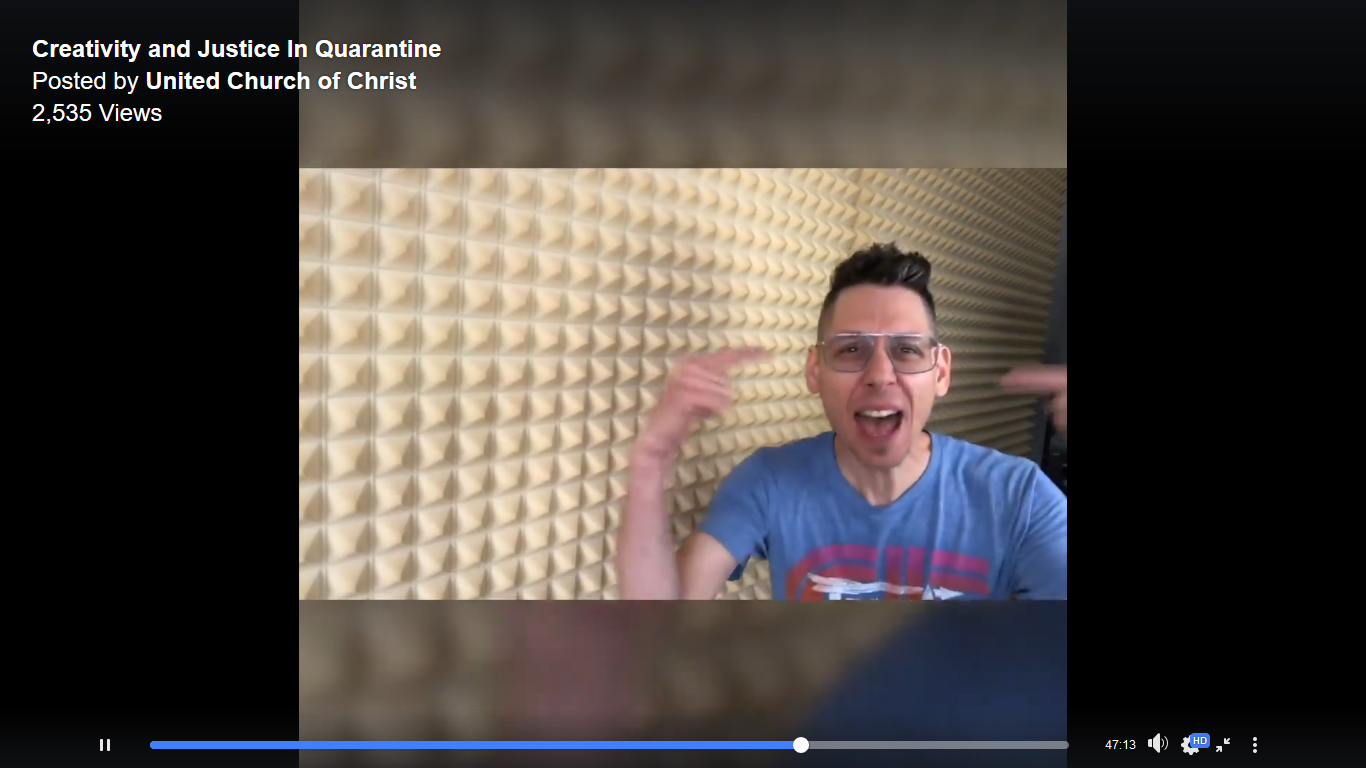 The “Creativity and Justice” video ends with testimonies and music from members of a hip hop project that will contribute music to the July 26 NYE worship service They are the Cleveland- and Cincinnati-based Refresh Collective. The group “has a mission to equip youth and uplift communities through creative arts and mentoring,” says its founder, “Dee Jay Doc” Harrill. Helping young people find their voices through hip hop is part of their work, he said.

Harrill and other Collective members speak in the video of the pain, challenges and “glimmers of hope” they see around them in a summer marked by COVID, and by a spotlight on police violence against African Americans. The Collective members are all based in one of those two Ohio cities or Milwaukee. Their poetic sensibilities come through even in their spoken comments.

“We use hip hop music as a way to build relationships,” says Jeremy Bryan. “To build rhythms. To build strategies for getting through the school day and getting through life with high motivation and self-regulation … creating hip hop that’s actionable, that has legs and gets you to places you want to go.”

“We are created by a creative creator to be creative,” says Malik Murray. “Whatever you do, there’s a spark of the maker in that. So there’s a divine power there. God doesn’t put that within you with nowhere to go.”

For NYE, they have created a special page at their Refresh Collective website with several recorded songs. “Passing the Peace” offers extended instrumental passages “so all of you can have it and use it,” Harrill says. “If you want to write your own raps to it, poems to it, freestyle to it, feel free to send video, send it in. Hopefully that beat will help you think about that concept, about who you want to pass that peace to.”

To young lyricists and writers, he says: “Don’t write to the general public, the general masses who might never hear or read your poem, but, instead, pour your heart out. Just pour it all out on the page. And share that with those who know you. And I think you’re going to receive the impact that you can have on your friends, your family, your neighbors around you by sharing your heart.”