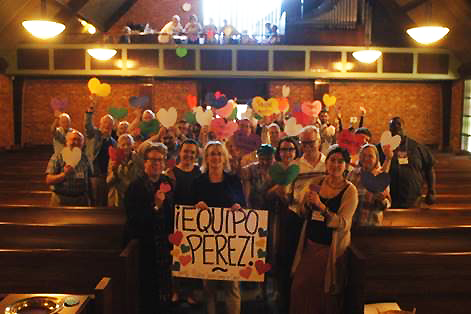 A 14-year-old girl is fighting cancer in a North Carolina hospital with just her brother at her side and UCC church members and friends to comfort her. Her mother is being denied entry to the United States and has spent months at the Mexican border trying get across to get to her.

Ixcell Perez, born in Raleigh, was living in Chiapas, Mexico, with her mother, Dalia, when she was diagnosed with leukemia. At the advice of the child’s doctor, Dalia took her daughter to the U.S. border at San Ysidro, hoping to get her to North Carolina and life-saving treatment. They were held by Customs and Border Patrol (CBP) for two days before being returned to Tijuana. As they sent her back to Mexico, Dalia said agents told her to look to God to cure her daughter.

After that, a relative living in California went to San Ysidro and was able to bring Ixcell across the border. But Border Patrol agents again refused to allow her mother to enter the U.S., separating Dalia from her stricken child. Dalia has been stuck at the border now for four months.

“This is about my mother,” Ixcell said in a recent video shared by Solidarity Now. “I want her to come here and take care of me because I need her. It’s not easy to be here without her.”

After initially being treated in California, Ixcell was sent to Duke University Hospital in Durham, N.C.

“Ixcell was in the hospital in San Diego until they couldn’t treat her anymore,” said the Rev. Carla Gregg-Kearns, pastor of Good Shepherd United Church of Christ, Cary, N.C. “She transferred to Duke, since she has a brother in Raleigh, and they have connections here.”

Good Shepherd UCC is one of two congregations working to reunite Ixcell with her mother. Partnering with Solidarity Now, an organization that connects communities in the U.S. with asylum seekers and children separated from their families, churches in Durham, Raleigh and Cary have launched a campaign to demand that CBP grant Dalia entry.

They solicited the help of Rep. David Price who wrote a letter on the Perez’ behalf, urging CBP to allow Dalia to enter the country on humanitarian grounds. They’ve put together an email campaign with Solidarity Now and have asked the State Department to reunite mother and daughter. As they follow directions of lawyers to get leverage for the Perez case, church members are providing Ixcell with love and care during her lengthy treatment process.

“Pilgrim UCC in Durham has a small group of volunteers that regularly go and visit Ixcell,” said Gregg-Kearns of the church closest to the hospital. “They are taking her food she likes to eat, bringing her things to do to provide support and presence. They have also taken pictures in the church to show her how many others are standing with her, and taped up hearts in her hospital room.”

When Ixcell has been able to leave the hospital between treatments, members of Good Shepherd have stopped by where she stays in Raleigh with family friends, bringing her gift cards.

The UCC churches learned about Ixcell’s case from Cole Miller, a member of Peace UCC in Clemson, S.C., and founding director of Solidarity Now.

“Cole Miller used to work with children in Iraq injured by U.S. bombs, arranging to have them brought to the states for medical help. Cole has since translated that work into children and medical support at the border,” Gregg-Kearns said. When Dalia’s lawyer at the immigrant advocate agency Al Otro Lado reached out to Miller for support, Miller turned to one of his mentors, retired UCC minister the Rev. Steve Sterner, who connected him with the Good Shepherd pastor.

Shortly after, Miller drove up to meet the Gregg-Kearns and they went to see Ixcell. Earlier this week Miller went to Tijuana to see Dalia after her latest attempt to get to her daughter failed.

On July 27, Dalia again tried to cross the border with a congressional letter of support, letters from the pediatric oncologist who is treating Ixcell, and accompanied by an attorney from Al Otro Lado. After four hours, the director of the San Ysidro Port Authority ordered her attorney to leave the building and denied Dalia entry into the country.

“This is measurably affecting her physical well-being,” Miller said, noting how Ixcell’s health markers fell after learning her mother has been turned away again. “The moral depravity of this is staggering to me. It is overtly, loathsomely racist.”

Miller said this case also speaks for many other cases, where children have been separated from their parents. “I view this as a form of torture against children. We have got to step up. We can’t let this go on much longer. If we can connect children with one person in need and they can help, that begins to look like something.”

“Our main concern in this is the health and well-being of Ixcell,” Gregg-Kearns said. “Here is a child who is gravely ill. There is no question that what’s best for her is for her mother to be with her here.”

“Right now my North Star,” Miller said, “is Dalia folding Ixcell in her arms in her hospital room.”