UCC momentum grows in the movement to Keep Families Together 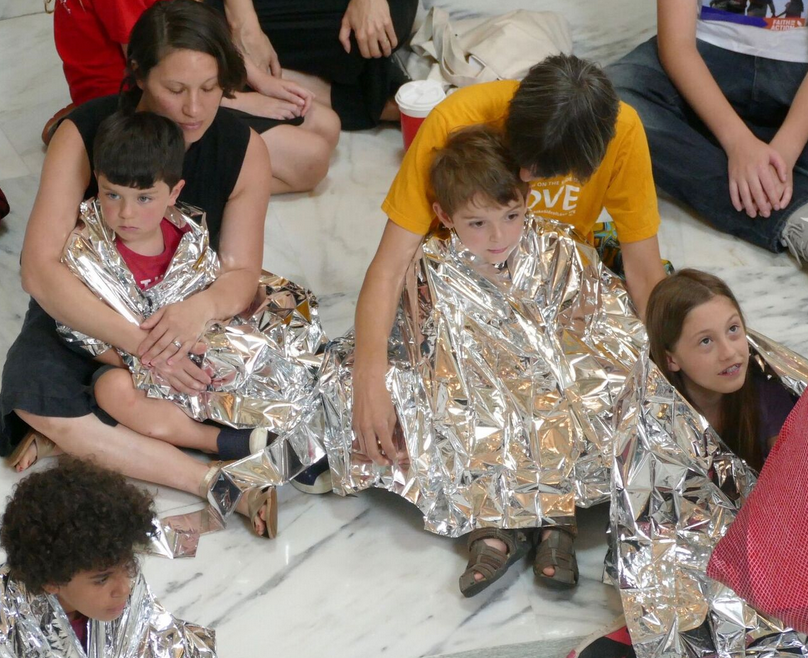 UCC leaders in the growing movement for immigrant justice took time on Thursday, June 21, to advocate for others the current administration would rather not hear.

The denomination was well represented on the floor of the Russell Senate Office Building, where hundreds of people from a variety of faiths came together to stand against the separation of migrant families.

“We are all God’s children. We are all made in the image of the One who now weeps for this country,” said the Rev. Laura Martin, associate pastor of Rock Spring UCC in Arlington, Virg. “We followed fifty small children who came into the Rotunda with Mylar blankets that they sat down on, and a small cage to represent the children being held captive inside of them. We came to proclaim and to pray, to sing and to chant, to stand in a place of power and bring the language of the faith that overturns the world.”

A group of clergy prayed over the gathered children, who symbolized the thousands of undocumented youngsters in government detention, sleeping on floors and placed in cages. The families of the young demonstrators, other supporters and the press filled in at all levels of the building. The group, after protesting the lack of comprehensive immigration reform, presented thermal emergency blankets and letters to their U.S. Senators. 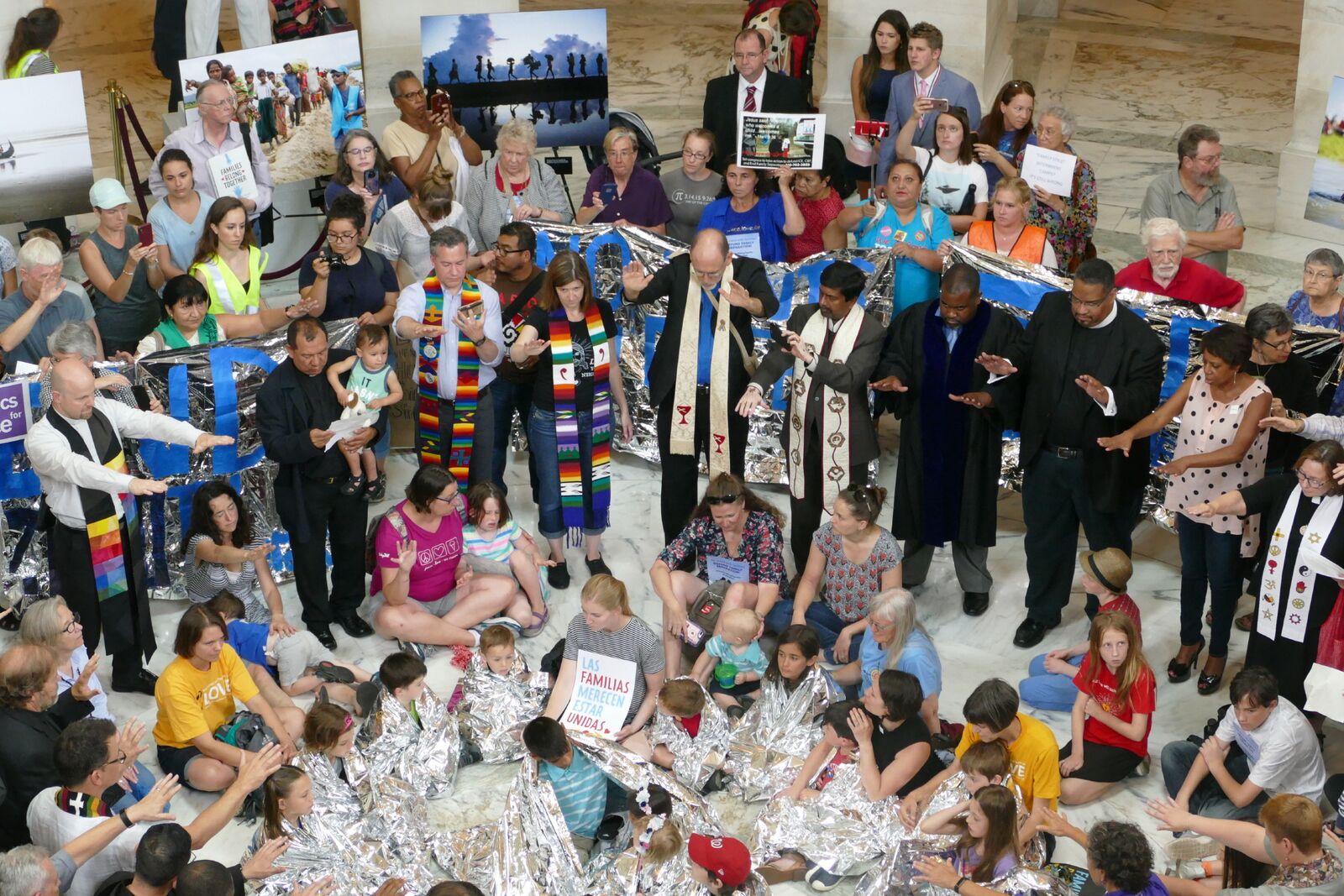 “It was a powerful time,” said the Rev. Marvin Silver, associate conference minister for the Central Atlantic Conference.” Our churches mobilized as much as possible on this, and I think they (lawmakers) got the message. When you look at the news coverage, its clear people think that this policy needs to end and the kids need to be reunited with their families.”

The Trump administration’s policy has led to the separation of more than 2,300 children from their families after crossing the border into the United States. Despite the President’s executive order to end that action, there are no assurances that children can be immediately reunited with their parents.

The United Church of Christ continues to push the issue. To further the call for immediate immigration reform, and discuss ways to continue to protest the criminalization of migrants under the Administration’s ‘zero tolerance’ policy, Justice and Local Church Ministries leaders invited members of the wider church to come together for a webinar Thursday afternoon. 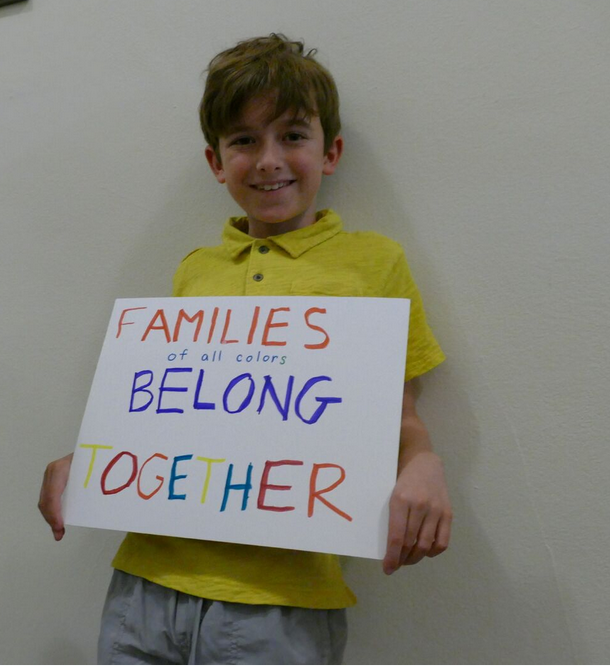 “Thank you for gathering to be the church in a different way,” the Rev. Traci Blackmon, JLCM Executive Minister, told more than 130 people linked online to talk about how all settings of the UCC can come together to work for immigrant justice. “Thank you for representing the masses, for lifting up your voices. We wanted to bring us together to create space (to explore) what more we can do.”

The Rev. Noel Andersen, coordinator of the UCC Collaborative on Immigration, talked about how undocumented immigration went from being a civic violation to a criminal one, and outlined the legislation currently under consideration this week in Congress. UCC’s Domestic Policy Advocate Katie Adams told the group that in the last week; more than 1,200 people have taken action to keep families together through the UCC Justice and Peace Action Network, sending more than 4,000 messages to Congress. She urged listeners to keep up the pressure.

The Rev. Randy Mayer, pastor of Good Shepherd United Church of Christ in Sahuarita, Ariz., just miles from the border with Mexico, said the immigration crisis is the result of a steady escalation of what has been happening for the last 15 years.

“It’s been ugly for a long time,” Mayer said. “We’re glad there is a lot of attention on this. President Trump is using families and children as a bargaining chip for a border wall. It’s a waste of money. Don’t fall for that line. We don’t need more militarization her at the border.”

Mayer has been offering pastoral care at the border, and he and church volunteers have been bringing food and other items to the migrants, primarily from Central America, who wait and hope to be allowed into the U.S.

The UCC has sent a $5,000 grant to Good Shepherd UCC to help fund this work, and opened an emergency appeal, Keep Families Together, which has collected more than $9,000 in the last week. Donations will be used by UCC settings and partners for immediate needs and legal assistance of children and families from Central America seeking asylum in the U.S.

As to what else people can do to make an impact, Rev. Blackmon mentioned a nationwide rally on June 30, and said, “Get in where you can fit in. Stay connected. Continue to pray and stand on the truth of the Gospel. Every human being is deserving of dignity. No one is unwanted in God’s eyes.”

Want more information? Bookmark the UCC Keep Families Together page, with a toolkit of information for how to respond to this crisis.