30 chaplains, endorsed by the UCC to do ministry beyond the local church, have assembled for a three-day training event April 15-18. Their sessions at a local hotel and at the Church House give them the opportunity to come together with like-minded people and to meet others with whom they serve, both in the church and in the armed forces.

“The networking time is really important,” said the Rev. Tim Usset, who serves a civil affairs brigade in the Army Reserve in Portland, Ore. “[It’s good] too see people we serve with, side by side, across the nation.”

Workshops on homiletics and preaching, coupled with a discussion on being more of a prophet—taking the denomination’s stand on social justice in an effort to turn the tide from a war-oriented approach to the UCC’s just-peace approach, for example—is being combined with training around veterans affairs and moral injury. 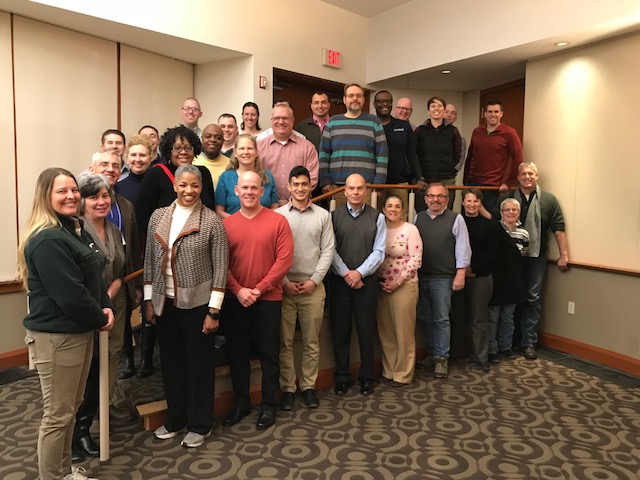 “It’s an important ministry,” said the Rev. Stephen Boyd, Minister for Chaplains and Ministers in Specialized Settings on the Ministerial Excellence, Support and Authorization (MESA) Ministry Team.
“With all the many different issues going on in our military right now, to have the voice of progressive theology, people from the UCC out there doing ministry – it’s a very important aspect of the church to be out there with our nation’s military.”

On Tuesday afternoon, the group got an opportunity to meet with the UCC’s national officers. Boyd said there was a lot of interest in hearing from the denomination’s leaders, and in the opportunity to share how their ministries reflect an outreach of the wider church.

The officers, in turn, were very interested in hearing what chaplaincy is like in this moment in time.

“I listened to them talk about what a difference it makes to be a military chaplain in the United Church of Christ, a denomination committed to a ‘no matter who you are’ expression of the gospel. One after another, they told me about how Muslim soldiers, gay soldiers, assaulted soldiers chose to reach out to them because they knew they would not be judged,” said UCC General Minister and President the Rev. John Dorhauer. “These leaders are working in almost complete anonymity, but are changing lives every day. It was an honor to share this time with them.”