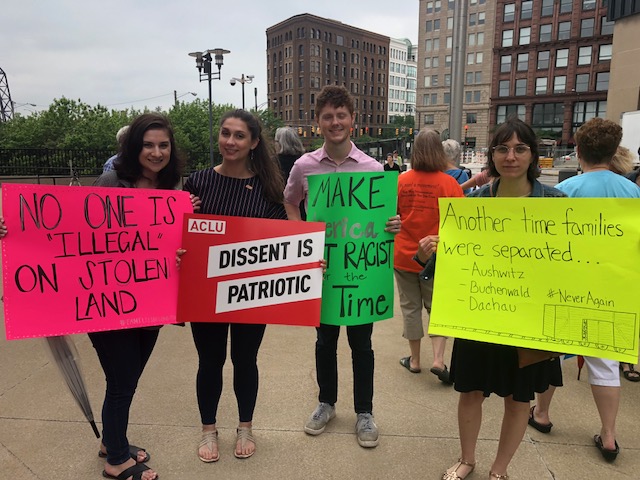 Across the country on Friday, June 1, scores of Americans came out to say no more – the purposeful separation of children from their parents at the border is cruel, inhumane and unacceptable in the United States. During a National Day of Action for Children, faith communities and civil rights organizations arranged dozens of rallies at Federal Courthouses, Offices of U.S. Attorneys and those of Immigration and Customs Enforcement, demanding a change in the latest policy that criminalizes the actions of parents bringing children into the U.S. illegally and forcibly separates their families.

“It is appalling that this administration doesn’t see the moral depravity inherent in ripping children away from their parents,” said the Rev. John Dorhauer, United Church of Christ General Minister and President. “As a faith leader, I say without equivocation there is nothing remotely humane in this policy. It is beyond sinful – it is evil. I call on all leaders of our church to contact their representatives. Ask them not to abdicate their responsibility. Tell them not to fund this atrocity. Tell them to use their power, their voice, and your vote to repeal this morally repugnant policy immediately.” 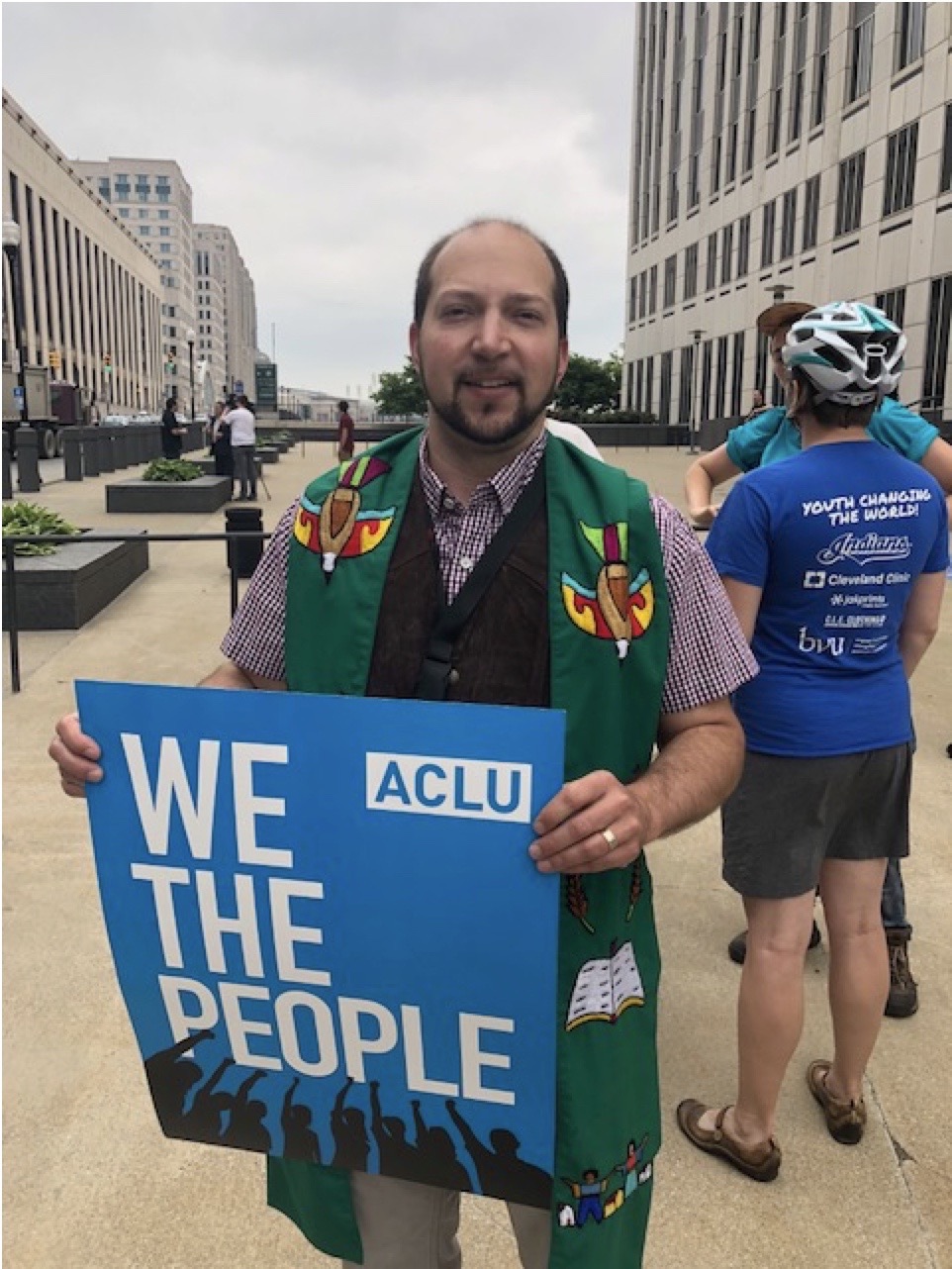 Since early May, when Attorney General Jeff Sessions announced that the U.S. would be prosecuting, as opposed to deporting, anyone seeking to cross the border illegally, and authorizing Customs and Border Protection to take the children, more than 658 children have been separated from their parents in the first 13 days of the program.

“We’ve been here before,” said the Rev. Traci Blackmon, Executive Minister of United Church of Christ Justice and Local Church Ministries. “The criminalization of those who reach for freedom. The punishment of those who dare demand their humanity be seen. The ripping away of children is the traumatizing of hope by dismissing the need of parents to nurture a sense of safety in our young. We’ve been here before. Native people had their children ripped away. Enslaved people had their children ripped away. And now migrant children are being ripped away. In every case, in every way, laws crafted to sanction separation in a quest to snuff out hope.”

“Simply put these immigration policies are cruel and inhumane,” said Katie Adams, domestic policy advocate, UCC Washington D.C. Office. “With each asylum seeker who is denied safe harbor, our country is complicit in human rights violations on a mass scale. The faith community, in addition to the tremendously important work on the ground, is responding with vigorous advocacy to Congress and the Administration by lifting up the values of our faith and the call to love our neighbor. Our faith guides our actions as we remember Zechariah 7:9-10, ‘Thus says the Lord of hosts, Render true judgments, show kindness and mercy to one another, do not oppress the widow, the fatherless, the sojourner, or the poor, and let none of you devise evil against another in your heart.’ Every day we meet with Congressional offices to urge them to increase oversight of the Department of Homeland Security to end these unjust practices, defund harmful immigration, and instead enact compassionate and thoughtful immigration policies that build families and communities up and protect children.” 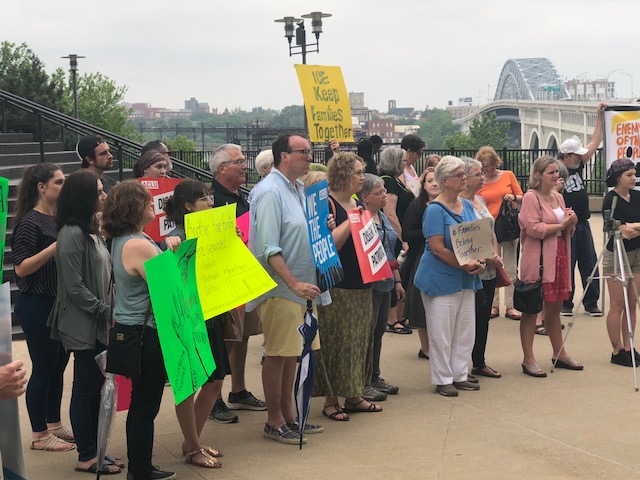 That message was echoed at the rallies across the country. In Cleveland, outside the Carl B. Stokes Federal Courthouse, UCC clergy joined advocates from the American Civil Liberties Union (ACLU), the National Domestic Workers Alliance, MomsRising, United We Dream, and MoveOn to gather as one voice and urge action to stop the government’s practice of separating families, while denying them due process rights.

“Can you imagine fleeing your home country, enduring a long and dangerous journey to the United States with your infant, only to have your child ripped from your arms – and to not even be told where your child is being taken, or when you will see them again?” said the Rev. Ben Guess, Executive Director of the ACLU of Ohio, former UCC national officer. “The Trump administration is sending the clear message that immigrants aren’t welcome here – and they don’t mind sacrificing constitutional rights and basic human decency just to get that across. They want to scare people away from coming to this country to seek a better life and aren’t afraid to admit it.”

ACLU attorneys have a federal lawsuit challenging the government’s practice of forcibly separating asylum-seeking parents and young children. Guess said they are fighting for the immediate reunion of as many as 10,000 children and parents through this class-action lawsuit. 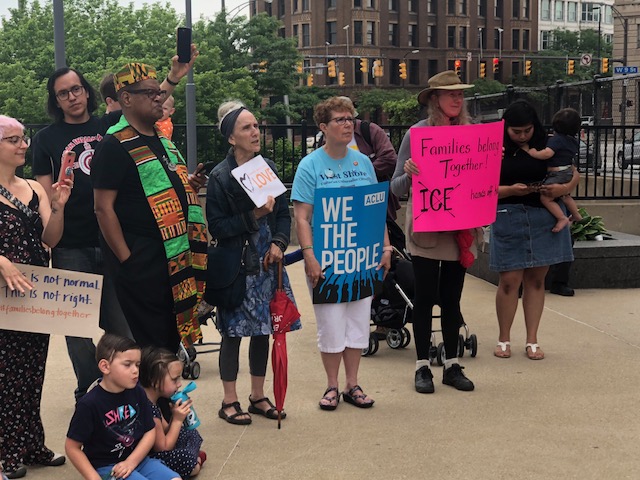 “Thousands of kids as young as 18 months are in danger of suffering lifelong trauma,” Guess continued. We can’t let the administration shift the blame or use families as bargaining chips for a border wall. Congress must hold ICE and Board Patrol accountable for the cruel and unnecessary suffering inflicted on families.”

The people living on the country’s southern border, in Arizona, see this first-hand.

“When borderlands residents hear that Immigration and Border Enforcement agents have a new policy of deterrence, we wince and know something cruel and inhumane is around the corner,” said the Rev. Randy Mayer, pastor, The Good Shepherd United Church of Christ, Sahuarita, Ariz. “First it was the Sonora Desert that was going to be the deterrent, pushing migrants to the most treacherous places where more than 8,000 have died in the past 20 years. Next it was Operation Streamline, a deterrence program that daily pimps the federal court to criminally prosecute 70 migrants en-masse, a process that shackles 300,000 of the most vulnerable to the for-profit prison machine at the bargain price of two-billion-dollars a year. Today’s deterrence experiment is the aggressive ripping of babies from the arms of their distraught parents and like a shotgun, violently blasting them across the horizon. Deterrence programs have never worked, especially when it involves hungry suffering migrants fleeing violence and death. They are evil in its purest form and countries that practice them have slithered to the bottom of the moral abyss. How have we gotten so confused about Jesus’ simple commandment to love the neighbor and to care for the least of these?”

Two things readers can do today – Call on Congress to act. Sign the ACLU petition.