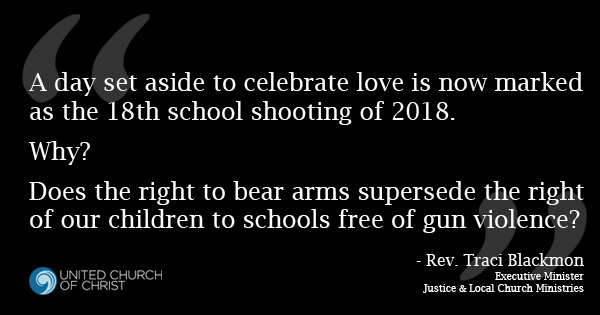 Seventeen people died in a school shooting Wednesday afternoon in South Florida, killed on Valentine’s Day by a former student expelled from the high school for disciplinary problems.

“Oh, my heart aches at news like this. I hate watching these stories unfold,” said the Rev. John Dorhauer, UCC general minister and president. “The senseless loss of young life; the random violence that takes the lives of innocent students; the growing sense that our schools are not safe. There is a burgeoning helplessness we all feel as we know no words will ease the pain of the victims’ families; and no amount of response on our part seems to mitigate the likelihood that it will happen again.”

The shooting at Marjory Stoneman Douglas High in Parkland, Fla., about an hour northwest of Miami, took the lives of both students and adults and injured more than a dozen other people. It is the deadliest school shooting since the 2012 massacre at Sandy Hook Elementary School in Newtown, Conn., which claimed the life of 20 children and 6 adults.

“Our condolences go out to all involved, but our condolences are not enough,” said the Rev. John Vertigan, conference minister of the Florida Conference UCC. “And so, I pray, ‘have mercy on me, O God, according to your unfailing love,’ and I strive to keep faith with a hurting people, a devastated community, and a nation in need of repentance at our lack of resolve to bring an end to the senseless gun violence that continues to scar the lives of so many young people and their families who start each school day with a hug they hope will be returned later that very same day.”

Teenagers waiting to be dismissed for the day heard a fire alarm, and then gunshots. Students taking cover recorded cellphone videos, capturing the sounds of rapid gunfire.

“The Florida Conference of the United Church of Christ is a member of the Florida Coalition for the Prevention of Gun Violence and today proves that membership is not enough,” he continued. “Activism and advocacy are essential. It’s past time for the Church to act. It’s past time to stand up to the gun lobbies and to advocate for Jesus’ way of peace that just can’t imagine how sisters and brothers or a nation can dwell together in unity while doing nothing to train our common spirit in the ways of justice, while doing nothing to mitigate the availability of weapons that enable such rampant violence, while doing nothing to stand in the public square and shout with a prophet’s heart that our prayers are not adequate and our faith demands more. We cannot pray “How long, O God, how long!?” and stand by doing nothing in the face of evil.”

Broward County Sheriff Scott Israel said the suspect is in custody, arrested in a neighboring city about an hour after leaving the school. He was armed with a semiautomatic AR-15 assault rifle, and a substantial amount of ammunition. He’s now charged with 17 counts of premeditated murder.

“The tragic shooting took place on Ash Wednesday when the church enters the season of Lent which is a time of repentance,” said the Rev. Jim Moos, UCC national officer and executive minister of Global Engagement and Operations. “Responsibility for these ongoing, senseless attacks rests not only with the shooters, but also with a society that refuses to repent from its idolatrous attachment to guns and gives virtually unlimited access to weapons capable of inflicting mass casualties.”

Seven weeks into the year, and there have already been 18 school shootings in 2018, eight of which have resulted in death.

“Our hearts ache with news of another gun violence tragedy, and we lift up prayers for the victims, their families, and the school community. But our words and actions cannot end there,” said Sandy Sorensen, director of the UCC Washington, D.C. office. “We must remember in November, and commit to tirelessly raising the issue of gun violence prevention in this pivotal midterm election year.”

“As we begin the season of Lent, let us all reflect deeply on how we worship violence and rely far too heavily on brute force to get our way, resolve our conflict, or express our rage,” Dorhauer said. “Let us commit to turning around a Congress beholden to the Military Industrial complex and the NRA when next we cast our vote. Let us use our time in worship to not only pray for the victims of this and all other random acts of violence, and to remind the people of faith with whom we gather that violence begets violence and that the way of Jesus is the way of peace.”

“Pastors, find your people today and console them. People, find your pastors today and ask them to lead with you in a movement to end violence in our communities. Remember especially the people of Parkland, Florida whose anguish cries out and whose pain demands justice,” Vertigan said. “Help build communities where this doesn’t happen. Use your own compassion and power to heal this national sin. And, yes, continue to pray.”