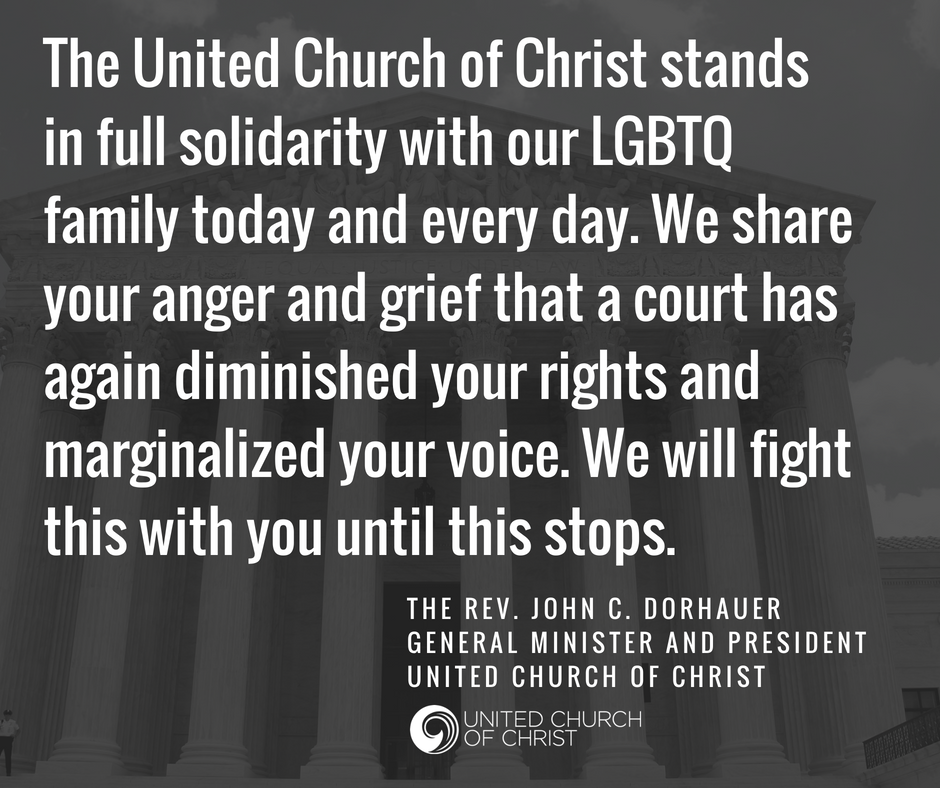 United Church of Christ leadership is expressing dismay and displeasure over a United States Supreme Court decision that rules in favor of Colorado baker who did not want to sell a wedding cake to a same-sex couple based on his religious beliefs, calling it a “difficult and dangerous ruling that leaves the door open to discrimination.”

The Justices, acknowledging that “it is a general rule that [religious] objections do not allow business owners and other actors in the economy and in society to deny protected persons equal access to goods and services under a neutral and generally applicable public accommodations law,” issued a 7-2 decision overturning the lower court’s decision in the Masterpiece Cakeshop case, effectively allowing the discrimination against a same-gender couple in this case only. Colorado has a robust statute protecting people from discrimination on the basis of their sexual orientation, as well as other characteristics. Although the Court agreed that “Colorado law can protect gay persons, just as it can protect other classes of individuals, in acquiring whatever products and services they choose on the same terms and conditions as are offered to other members of the public,” the Court perceived that the Colorado Civil Rights Commission did not treat the baker’s religious objections to providing a cake for a same-gender marriage in a neutral way.

The Court sidestepped the larger issue of whether all businesses can refuse to serve gay and lesbian customers, since respect for religious liberty requires recognizing diverse religious beliefs and seeks to protect all citizens. 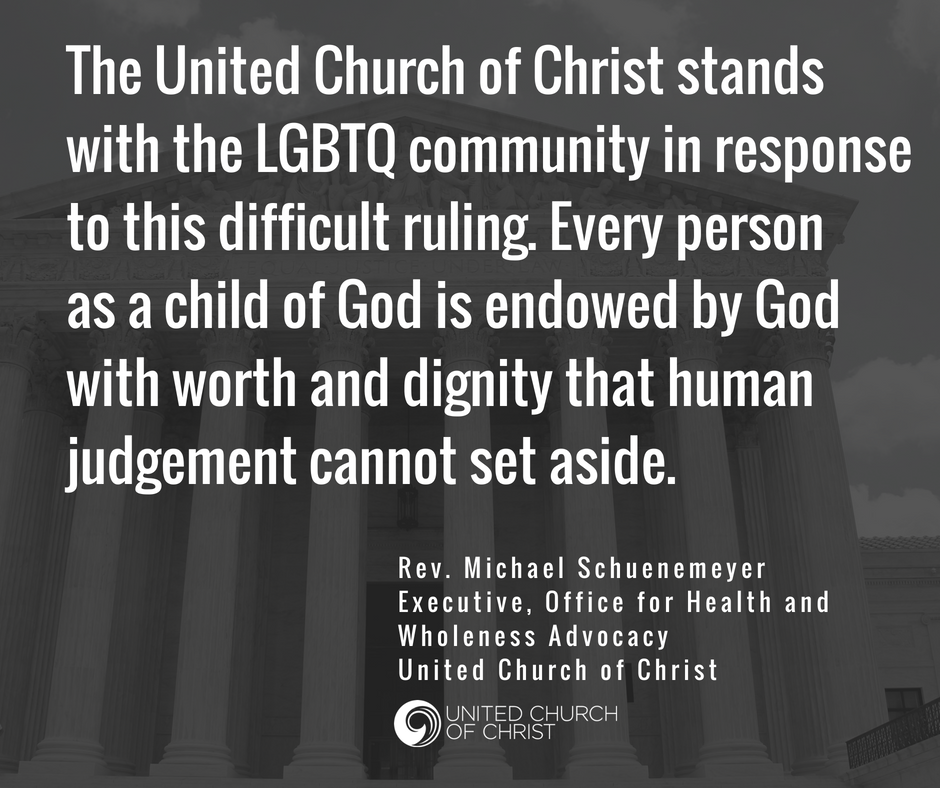 In a statement on behalf of the UCC national leadership, the Rev. Michael Schuenemeyer, executive for health and wholeness advocacy, emphasized that every person is a child of God, endowed by God with worth and dignity that human judgment cannot set aside.

“The United Church of Christ stands with the LGBTQ community in response to this difficult ruling. The General Synod of the United Church Christ has been unequivocal in it’s stand against discrimination based on sexual orientation or gender identity,” Schuenemeyer said. “The General Synod’s 1975 Pronouncement on Civil Rights affirmed that every person as a child of God is endowed by God with worth and dignity that human judgment cannot set aside. It recognized the harm that discrimination does in public accommodations. The General Synod has consistently called for legislation and policies that protect all children of God.

“Although the very narrow ruling in the Masterpiece Cakeshop case only applies to that case, and that case only, the 7-2 decision by the Supreme Court is likely to have harmful repercussions for the LGBTQ community,” he continued. “The court’s decision is in conflict with itself, on the one hand saying states can pass laws that protect classes of citizens, including protections on the basis of sexual orientation and gender identity, and at the same time allows discrimination in this case when the law of the State of Colorado, where the case comes from, clearly prohibits discrimination, which Justice Kennedy, who wrote the courts ruling, clearly recognized.”

The General Synod of the United Church of Christ and the Baptist Joint Committee for Religious Liberty filed an amicus brief in this case, joined by the Episcopal Church, the Evangelical Lutheran Church in America and the Chicago Theological Seminary. The brief argued that the Colorado statute strikes an appropriate balance respecting religious liberty and ensuring access for all to the commercial marketplace, while explicitly exempting houses of worship and other religious institutions. If an exemption were to be granted in this case, the brief argued “[r]eligious liberty itself would suffer, as religious individuals would be subject to being denied service because the commercial proprietor’s religious views differed from theirs.” The General Counsel of the United Church of Christ, Heather Kimmel, noted that the Court’s decision today does not create a general religious exemption to Colorado’s anti-discrimination statute. “The Court decided this on very narrow grounds, though the ruling will not be without ramifications for the LGBTQ community.”