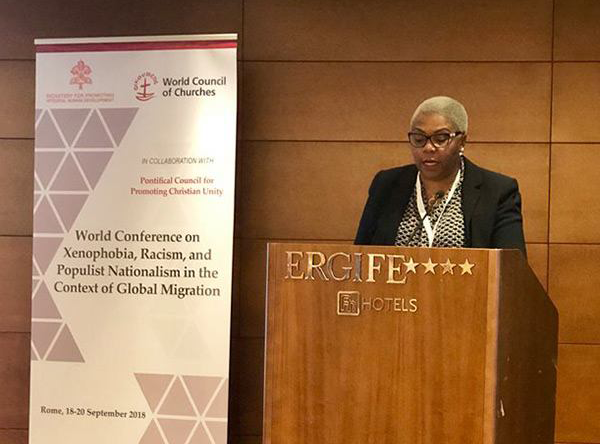 The Rev. Traci Blackmon, representing the United Church of Christ, addressed a global gathering of religious leaders in Rome this week bearing witness to the role of the church in the call to intervention and justice. The Executive Minister of Justice and Witness Ministries, at the conference “Xenophobia, Racism and Populist Nationalism in the Context of Global Migration” called for a renewed commitment by the Church to speak out against racism, white supremacy and a society that “favors some of God’s creation over others.”

In a twenty minute presentation, Blackmon urged world leaders from over 1,000 Christian, Muslim and Hindu traditions to step out on faith. She said that, as the Church, we need to be political, but not partisan, to combat the oppression that many Black and Brown people continue to face today.

“There are those who will say the church should not be political. Indeed, we have heard such phrases even as we gather here to talk about justice. But I disagree. The very birth of the Christ child was both a holy and political act,” Blackmon said. “The Jesus story, in its historical context, reveals both human terror and divine grace, both human suffering and supernatural deliverance. The Jesus described in the Bible had more in common with the children of refugees born today than we might be comfortable imagining. Jesus was an Afro-Semitic Palestinian whose family was displaced due to terror and political turmoil. The church of Jesus the Christ cannot be apolitical. There is no middle of the road on matters of injustice.”

Addressing the church’s role in the call to justice, Blackmon also encouraged those gathered to speak out against harmful policies, like the United States cap on refugee admissions, and current immigration policies “that criminalize the quest of others for a better life and separates children from their parents at the border.”

The Rome Conference, September 18-20, was jointly organized by the World Council of Churches and the Vatican’s Office for Integral Human Development. The call for Christians – to assert their moral responsibility to say no to racism, xenophobia, exclusion and discrimination, with the two days of discussions aimed at finding ways to do that.

One way that Blackmon cited – Just be the Church. “With the number of churches we have – if each church committed to making a difference, just in the circumference of their space, we could change the world. We could change people,” she said. “What people really want is to know that they matter and to belong somewhere. If the church doesn’t provide that, somebody else will.”

Later at an audience with Pope Francis, Blackmon and his holiness shared a laugh, as he expressed appreciation for her work, and the work of the conference.

On September 20, Pope Francis told the group that he hoped their encounter would lead to other shared initiatives in the battle against racism and xenophobia. Echoing Blackmon’s comments, the Pope said that Christian churches have a moral responsibility to witness the love of Christ and to our common origin of the Creator which makes us all members of the same human family.

“It was an honor to be included,” Blackmon said. “I am grateful for the work Rev. Karen Georgia Thompson, our ecumenical officer, has done to make our Global Ministries staff and the United Church of Christ a sought-after voice in such a space.”