As announced in April, The Pilgrim Press has rebranded itself with a new logo out of sensitivity to the complex history of the UCC’s New England forebears, which includes both bravery in the face of English religious restrictions and complicity in colonialism and genocide.

In her June 24 presentation to the Synod in Milwaukee’s Wisconsin Center, Managing Editor Rachel Hackenberg described the choice of the new compass logo, replacing earlier ones that included various versions of the Pilgrim ship The Mayflower. She called it a move “from a reflection of conquest to an invitation to wander.”

“This is who we are as the United Church of Christ: opinionated wanderers, deeply convicted seekers, far-flung adventurers and ever-widening circles of community,” Hackenberg said. “We are people who make the faith our own in every generation. And this is the foundation from which we publish books that provoke us to learn together, to journey together, and to pursue God’s call together.”

She also announced a workshop to be held in Phoenix in October for unpublished authors. 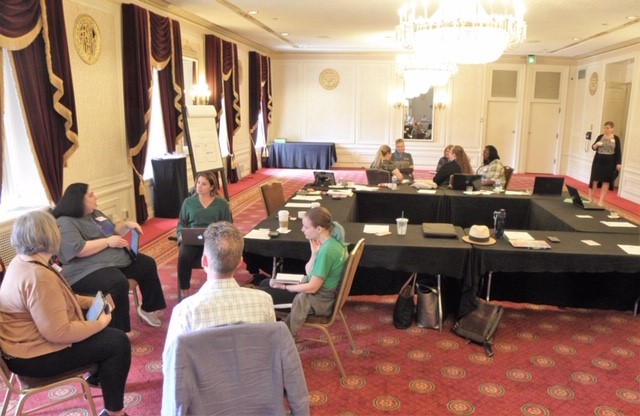 Earlier, on June 20, the day before Synod, the Press had hosted a workshop in Milwaukee on how to pitch your work to a publisher. Ten UCC writers from around the country took part, representing subject matter as diverse as poetry, church vitality, education, prayer and academic subjects.

“The Pilgrim Press has a long tradition of helping writers get started,” Hackenberg said that day. “The book proposal is the most important key to getting published.”

Some of the participants will not be good matches for The Pilgrim Press, Hackenberg said – and that’s fine. “This is about investing in our UCC writers and helping support UCC voices, whoever their future publisher might be.”

In her June 24 Synod speech, Hackenberg said: “We are all pilgrims, striving after insight in life and faith, delighting to understand the Spirit in our own words. The Pilgrim Press is honored to be your publishing house, an honest companion in support of daring adventures. We are blessed by 400 years of publishing testimony, and we are excited for what lies ahead.”