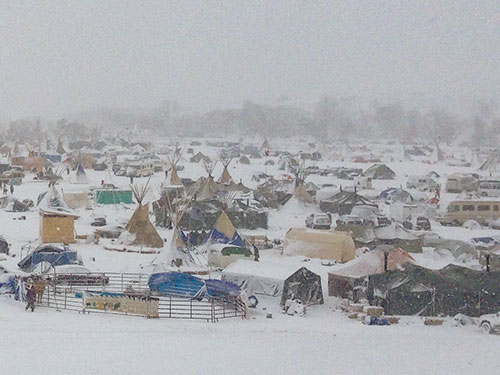 As thousands of religious leaders, clergy, chaplains and military veterans make plans to converge in North Dakota Dec. 4 for a day of prayer at the water protectors camp north of the Standing Rock Sioux Indian Reservation, UCC allies are calling for continued advocacy in opposition to the Dakota Access Pipeline (DAPL) in the form of phone calls and petitions.

The veterans 'deployment,' a show of support planned for this weekend, coincides with Sunday's Interfaith Day of Prayer, initiated by Chief Arvol Looking Horse, the 19th generation spiritual leader of the Lakota, Dakota, and Nakota Nations. The thousands putting their bodies on the line near the reservation will be supported by a movement to mobilize people across the country to reach out to their elected representatives before Dec. 5--the date water protectors were told to leave the lands where they have been camping for months.

"This is a very serious time we are in," Chief Looking Horse said in a video call to action for the day of prayer. "I know in my heart there are millions of people that feel this is long overdue. It is time that all of us become leaders to help protect the sacred upon Mother Earth. She is the source of life and not a resource."

After the US Army Corps of Engineers (USACE) announced plans Friday, Nov. 25 to shut down the Standing Rock encampment on Dec. 5 for "safety reasons," North Dakota Gov. Jack Dalrymple issued an executive order Monday, Nov. 28 calling for mandatory evacuation of the 5,000 water protectors at the Oceti Sakowin camp located on USACE lands, citing harsh weather conditions and a threat to human life. But those people trying to stop the $3.7 billion pipeline from crossing sacred Tribal sites and under the Missouri River say they aren't going anywhere, despite the snowy winter weather that has just moved in and the threat of trespassing charges.

"As I have stated previously, the most dangerous thing we can do is force well-situated campers from their shelters and into the cold," said the Standing Rock Sioux Tribe's Chairman, Dave Archambault II. "If the true concern is for public safety than the Governor should clear the [highway] blockade and the county law enforcement should cease all use of flash grenades, high-pressure water cannons in freezing temperatures, dog kennels for temporary human jails, and any harmful weaponry against human beings."

Archambault is referring to the violence at the hands of law enforcement that left scores of people injured Sunday, Nov. 20, after a confrontation on a barricaded highway bridge. Water protectors were trying to remove burned out vehicles off the road that provides the quickest access to area medical centers.

With the Monday deadline looming, there have been reports that the North Dakota governor plans to escalate the blockade, stopping supply shipments from reaching the water protectors, and threatening fines for those who don't comply.

The Rev. Marlene Helgemo, pastor of All Nations Church in Minneapolis, Interim Executive Director of the UCC Council of American Indian Ministries (CAIM), and a frequent visitor to the Oceti Sakowin camp, points out that telephone advocacy is a very important way thousands around the country can show solidarity with Standing Rock. She hopes every person who has voiced support for the tribe will now use their voice to call their lawmakers.

"Please make an effort to contact your Senators in Washington, D.C. Everyone we know, all those who have been to the camps need to call their Senate offices and share their concerns and observations ASAP. Our Senators need to hear from constituents from as many states as possible so they can act on upcoming solutions and ask the President to intervene. Let's make 5,000 calls by Dec. 5."

Leaders of several Tribal Nations also plan to meet with Senators, government to government, to encourage President Obama to take a stand to stop the pipeline. More than 300 Tribal Nations are offering support and allegiance to stopping the Dakota Access Pipeline.

The Rev. Brooks Berndt, the UCC environmental justice minister, is currently working with a group of interfaith religious organizations around the country who plan to reach out as one to President Obama. He's encouraging clergy who want to be part of the effort to send him an email, with a statement expected before the Dec. 5 deadline.

"While the US Army Corp of Engineers and the Governor of North Dakota have made Monday a deadline, we plan to call for a lifeline, a lifeline extended by President Obama through the act of denying the final permit necessary for the Dakota Access Pipeline,” Berndt said. "With the closing days of this administration upon us, we cannot stand by idly as the water protectors face ongoing threats and more ominous prospects. The time for action is now.”

A list of phone numbers for government leaders can be found here.