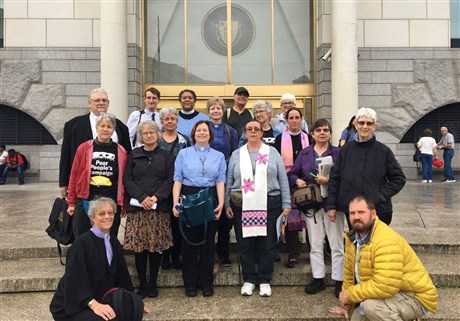 Six of the 16 people arrested during a Poor People's Campaign action at the State House in Boston on Monday were from Massachusetts Conference churches, there to call attention to systemic racism, immigration justice, and voting rights.

UCC clergy the Revs.Vicki Kemper, Kathryn Stevens, Elizabeth Magill and Kate Layzer were arrested as were Mary Friedman, a member of First Church of Christ in Longmeadow, and Sherrill Hogen, a member of the First Congregational Church in Ashfield. They were all charged with criminal trespass for refusing to leave the State House when so ordered by State Police. Kemper said they had been there for about three hours, having a teach-in about poverty and systemic racism, singing songs, delivering Poor People's Campaign demands to the governor's office and the offices of key legislative leaders, sharing stories about our involvement, and praying.

"I believe Jesus calls us to stand with, and for, the poor," said Kemper, pastor of First Church in Amherst, UCC. "My love for Jesus is transforming my heart and mind and enabling me to see more of the injustices of our society. Systemic racism hurts not only people of color but also everyone else. Voter suppression makes a mockery of our democracy. My faith would not let me stand idly by as social and economic inequality increases, immigrants are separated from their families and deported to dangerous lands, and called 'animals' by our president. In addition, I was acting in solidarity with Lucio Perez, the Guatemalan immigrant who has been in sanctuary at First Church Amherst for seven months, his wife, Dora, and their four children."

The action was held as part of the 40 days of action by the Poor People's Campaign: A National Call for Moral Revival. This campaign, which continues the 1968 initiative of the Rev. Dr. Martin Luther King Jr., is a nationwide call to action, aimed at changing legislation that penalizes poor people. The movement calls for justice for the most vulnerable, an end to systematic racism, ecological devastation, and an economy built around war.

Magill, who most recently served as interim pastor at the South Acton Congregational Church, said she feels it is time to stand up for Biblical values.

"I was willing to be arrested as a white wealthy person because it is expensive for poor people to be arrested and dangerous for people of color to be arrested," she said. "Racism, poverty, and immigration are inseparable problems. The biblical witness is clear: we are to stand up for people who are poor, we are to welcome the immigrant, and we are to see neither Jew nor Greek, slave nor free, male nor female, for we are all one in God's eyes."

And Layzer, Minister of Street Outreach at First Church in Cambridge UCC, said: "For me, an important dimension of participating as a white middle-aged, middle-class U.S. citizen with very little to lose by participating in protest is to amplify the cries of people who are being hurt. We need to draw attention to suffering, to the fact that people don’t all get treated the same, people don’t all have access to equal resources, people don’t have what they need to live. It’s really as simple as that. There’s a lot of good will out there that needs to be activated on behalf of those left out, left behind. and punished by a system heavily weighted in favor of those already in power. I hope others will feel moved to join us, in order to make the cry of the poor louder: 'God, please just let me and my family live.'”

The 16 people who were arrested were ordered to appear in court on Tuesday morning. At that point, the district attorney agreed to reduce the charges from criminal trespass to civil, and asked that we each be fined $100. The judge then dismissed all charges and did not levy the fines.

While at the courthouse, the group found themselves in a position to help someone who could not make bail. Read Layzer's account of that here.

Tiffany Vail is the Associate Conference Minister for Communications of the Connecticut, Massachusetts and Rhode Island Conferences, United Church of Christ