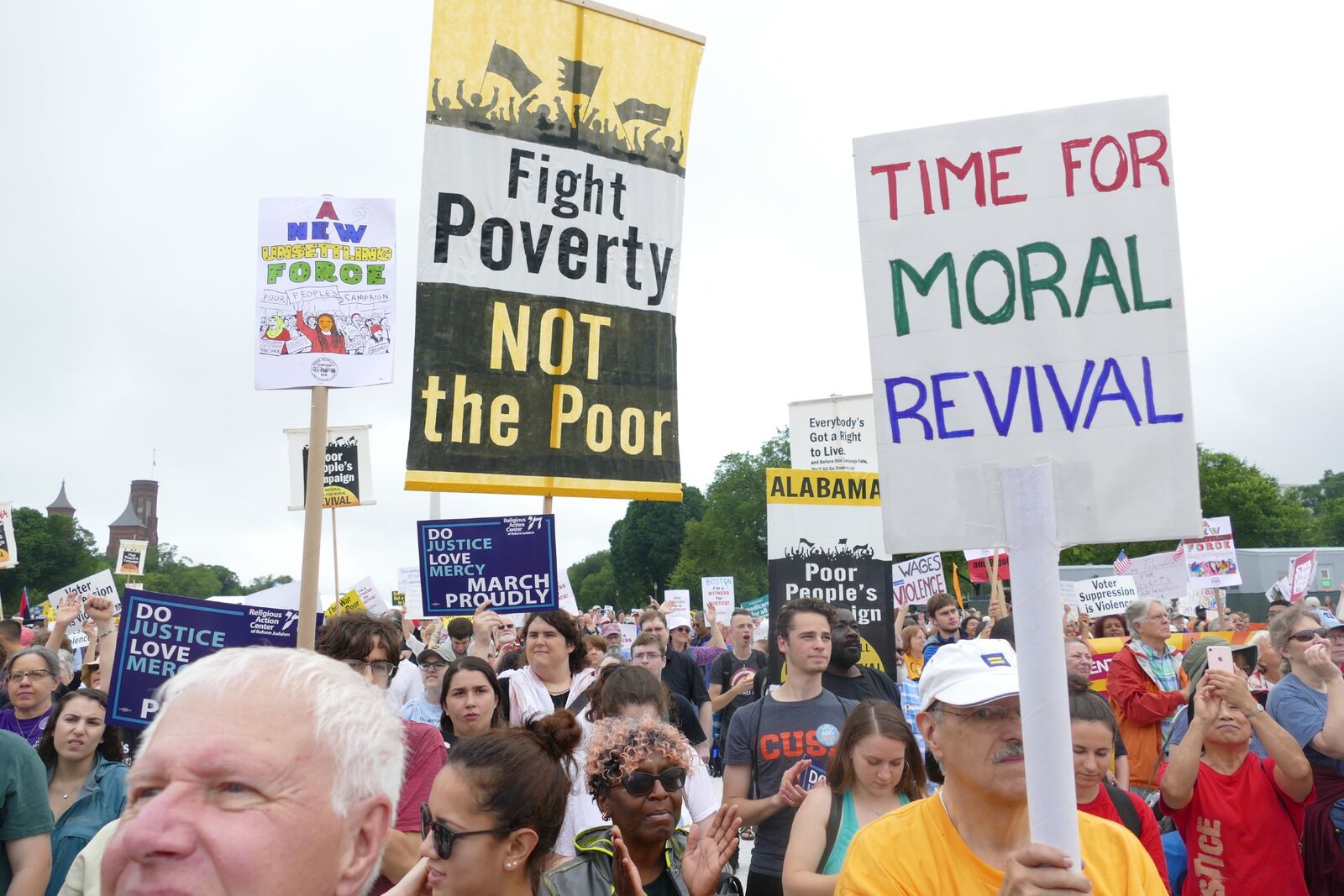 Thousands of people rallied on the National Mall in Washington, D.C. and marched to the Capitol on Saturday, lifting up the intersectional message of the Poor Peoples Campaign, carrying signs and calling for a restoration of voting rights, the right to clean air and water, affordable housing, access to health care, and an end to the militarization of the border and our communities.

The mass demonstration on June 23 followed six weeks of actions around the country, with activists demanding change from their lawmakers, and risking arrest at state capitols and in Washington, D.C. Saturday’s gathering called people from across the United States to march together for a ‘moral revival’ more than 50 years after demonstrators converged on the Capitol in 1968 to continue Rev. Dr. Martin Luther King Jr.’s Poor People’s Campaign.

“Over the campaign’s last 40 Days of Action, I have been so encouraged by the strong participation of UCC members and congregations from around the country engaged in state-based and national advocacy,” said Sandy Sorenson, director of the UCC Washington D.C. Office. More than 50 UCC members gathered at D.C.’s First Church before Saturday’s rally, including UCC advocates from California, Massachusetts, Minnesota and the Central Atlantic region. 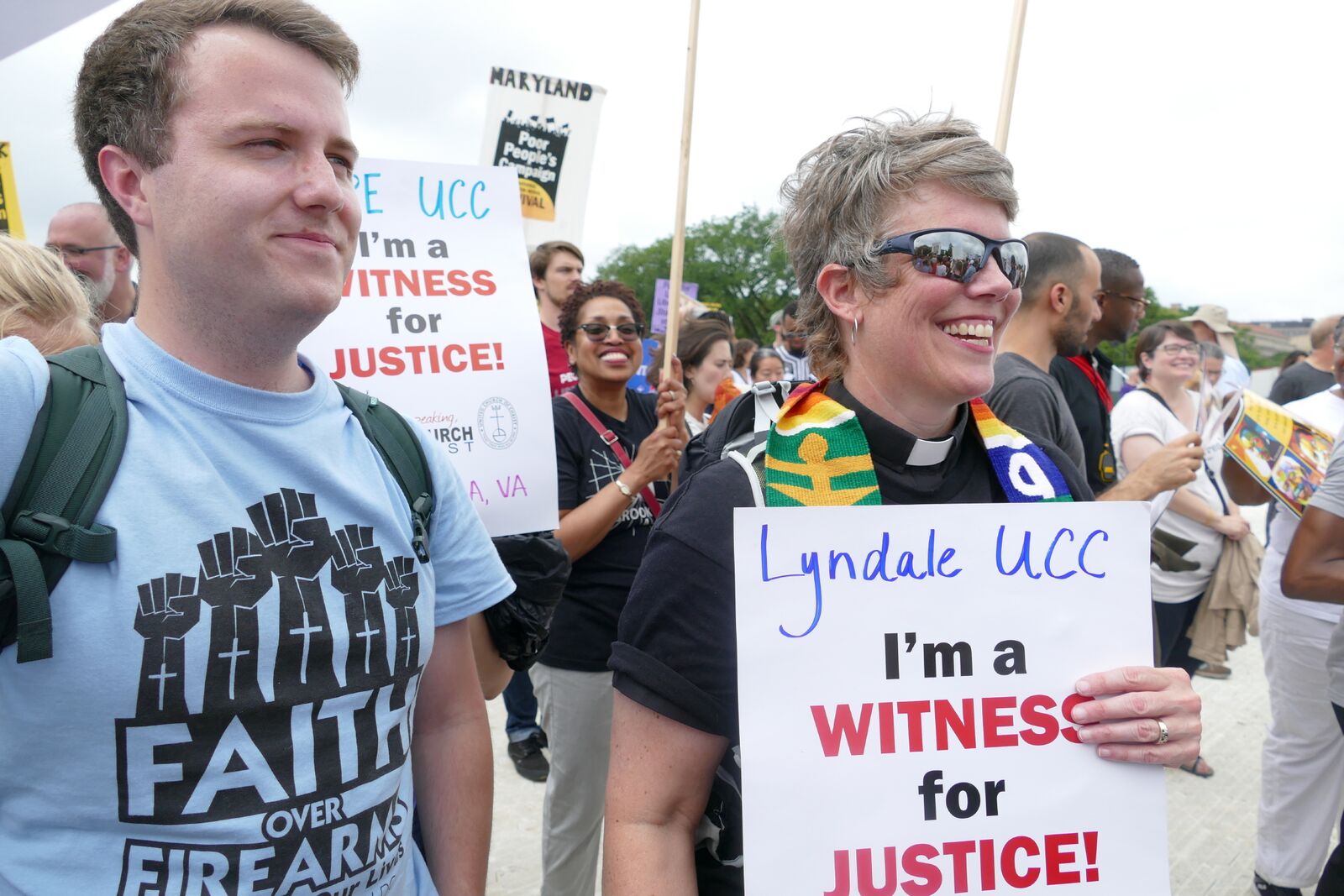 Both Rev. William Barber, co-chair of the campaign, along with Rev. Liz Theoharis, were clear that Saturday’s rally was not a culmination of 40 days of action, but a launch of ongoing advocacy for the most vulnerable. Many speakers highlighted the importance of this 2018 election cycle and the need for voter registration and engagement.

The Rev. Traci Blackmon, bringing greetings to the crowd from the United Church of Christ, offered words of solidarity, which revved up the masses as they readied to march.

Referencing the current national leadership and the 2018 mid-term elections, Blackmon continued, “We are not just here to march, we are here to mobilize. November is coming, and we are marching to serve notice, you’ve got just a little while to get on board.” 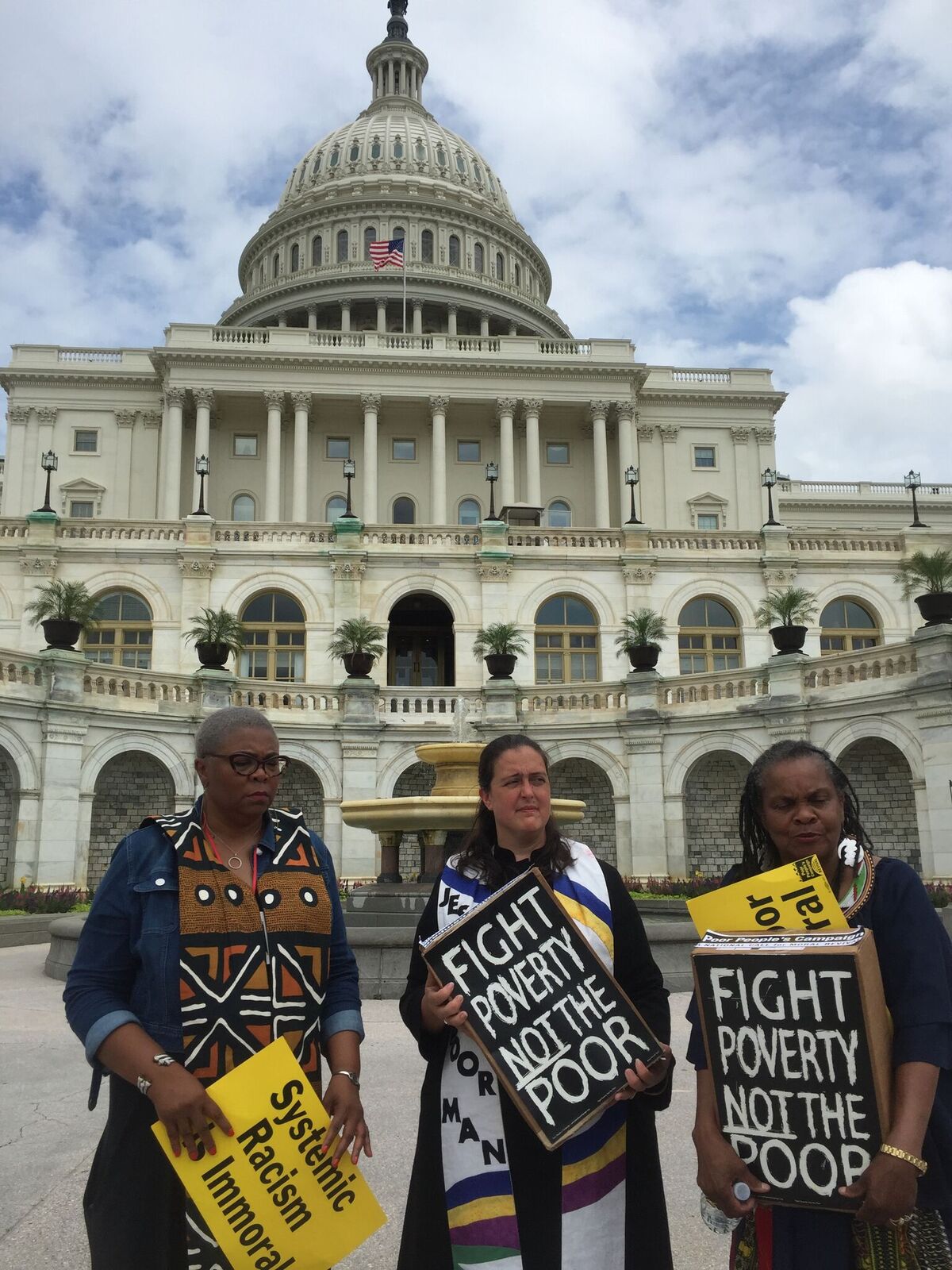 Rev. Barber was clear in his call that this work is grounded in America’s moral traditions. “Don’t get it twisted,” he said. “We are not left, we are not right, we are not conservative or liberal — it (this campaign) is a moral call to address a distorted public policy agenda that leaves the most vulnerable behind.”

In the next phase of the campaign, described by Barber and as an answer to King’s call in his “I Have a Dream” speech — a call to go back to your home communities to work to change the system, to use the Campaign, launched in early May, as a foundation for social and political change.

As a partner in the Campaign, the UCC Washington office will be delivering a letter to members of Congress from campaign co-chairs Rev. Barber and Rev. Theoharis. “We are writing to let you know that this is just the beginning or our movement,” the letter states. “And we ask you to listen, heed our words and actions, and work for the change that this country and our people urgently need. When we broaden our understanding of poverty to include access to food, clothing, housing, and necessary utilities, we learn there are over 140 million poor people in this, the wealthiest country in the world.”

“I was heartened to stand with thousands of other faith leaders and justice advocates, especially at a time when we seem to be losing our moral compass as a nation,” Sorensen said. “More than ever, our core faith calling to stand with the vulnerable is critical to influence the public dialogue on the key issues and policy decisions that lie ahead.”