Ohio church takes seriously its responsibility to love all its neighbors 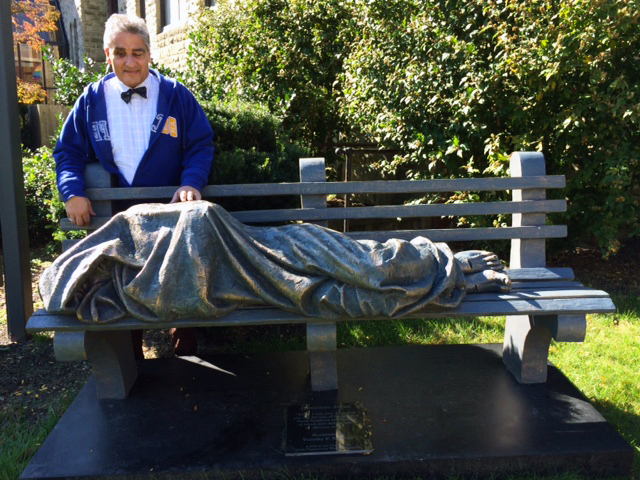 The homeless figure is huddled on a park bench. Most of his face is obscured by a tattered blanket that doesn't quite cover his whole body, exposing bare feet: feet complete with scars and nail holes.

"Homeless Jesus," a sculpture by Canadian artist Timothy Schmalz, was installed on the lawn of First Congregational UCC in Elyria, Ohio, the first week of October. It will remain there until Nov. 5.

"The sculpture was installed to spotlight the needs of those who are homeless," said the Rev. Patrick S. J. Nicolino, senior pastor. It "is able to evoke many responses and begin conversations around many social justice issues. The hope was — and is — that the community of Elyria will become more sensitive to the needs of the homeless within the city and the world."

The idea to bring the sculpture to First Congregational came from the church's fellowship team, as it looked for a way to "engage the community and draw attention to the needs of homeless refugees, migrants, and those marginalized within our community and society at large," Nicolino said.

The fellowship team contacted Community West Foundation, a local faith-based foundation that owns the sculpture. Community West installed "Homeless Jesus" on its own campus last spring, with plans to make a traveling exhibit. Bronze versions of the sculpture are installed in various places around the globe, including a permanent installation outside the Papal Office of Charities in Rome, Italy.

According to Community West, the statue is a physical representation of Matthew 25:40, "Truly, I tell you, whatever you did for one of the least of these brothers and sisters of mine, you did for me."

Nicolino says that even though the sculpture has only been at the church for a short time, its impact already is being felt. Many people have stopped in front of the sculpture to reflect or have a conversation with him. On the sculpture's first day at the church, someone told Nicolino that the piece is a powerful statement about how to treat people that "do not look like or sound like ourselves."

In conjunction with the sculpture, First Congregational also is collecting socks, toiletries, towels, wash cloths, sleeping bags and warm coats for the upcoming winter months, which will be distributed through the church's food pantry. The items will be available to those who have a need, with no questions asked in order to maintain their dignity, Nicolino said.

"It is my belief that the 'Homeless Jesus' sculpture has heightened the presence of First Church in the Elyria community," said Nicolino. "It has also made clear the fact that First Church is an Open and Affirming congregation, that the ministries at First Church are directed outward, and that First Church takes very seriously the responsibility to be Jesus for others."

The sculpture also drives home the point that "no one — no one — wants to be poor or homeless," Nicolino added. "There are a multitude of needs in our world and, at times, we may become hopeless. The reality is that God is very present in our community and world, and we need to just look around and be open to seeing and hearing God in what we would consider the most unlikely of persons and places."

Nicolino, who is blind, tells the story of one individual who, after viewing the sculpture, stopped to thank him "for reminding me that Jesus was a person just like me." The person was homeless, and the family had to live out of their car for a time, relying on food pantries and hot community meals. The individual started to cry, and told Nicolino how difficult it was, especially for the children, who live with the stigma of poverty.

At the end of the conversation, "the individual stood up and gave me a hug and thanked me for being a church that does not blame people, but instead accepts people for who they are and where they are," said Nicolino. "The person began to leave and said, 'I have been at your worship service and have met you before. I am glad that you and the congregation are willing to not only talk the talk but to also walk the walk.'"