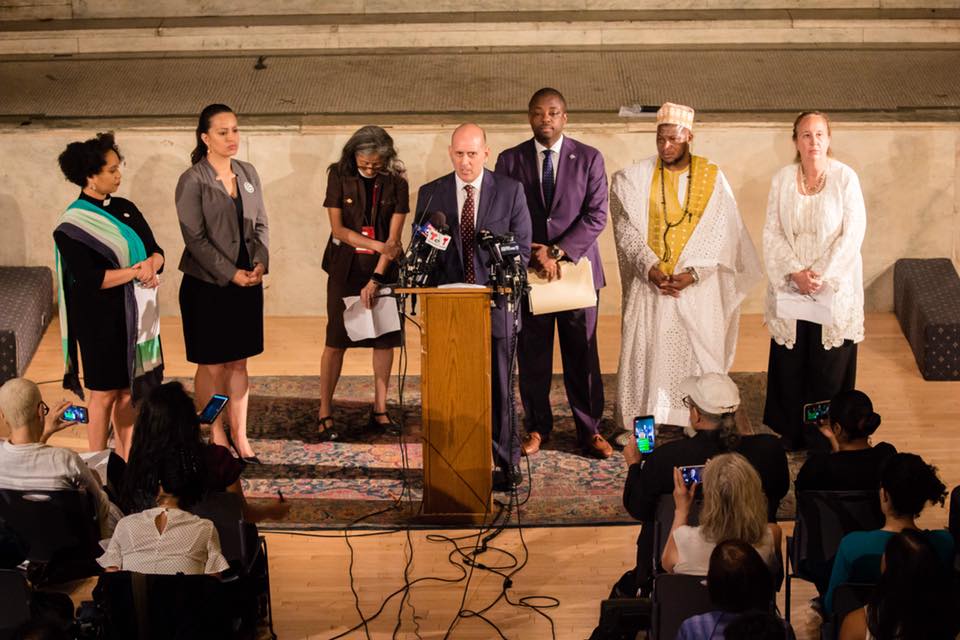 New York faith leaders, fighting to change the federal government’s immigration policies, have teamed up with attorneys and state lawmakers aiming to hold the federal government accountable for immigrant children taken from their parents. It’s a move of moral leadership; one that UCC clergy and the New Sanctuary Coalition in Manhattan hope catches on across the country.

A collaboration of clergy, elected officials, immigrants and allies of the New Sanctuary Coalition introduced legislation at Judson Memorial Church in New York City on Wednesday, July 25, that would require state-licensed facilities to provide public reports, outlining the number of children they are housing.

“We don’t know what the current numbers are. And that’s part of the problem,” said the Rev. Kaji Douša, senior minister of Manhattan’s Park Avenue Christian Church and co-chairwoman of the New Sanctuary Coalition. “We have heard that there are about 600 kids who have been separated from their parents in New York. The official number is closer to 400. The agencies are saying that they don’t have to tell. We want states to say that we want to know what is happening to these children from these immigrant families and we want to protect them.” 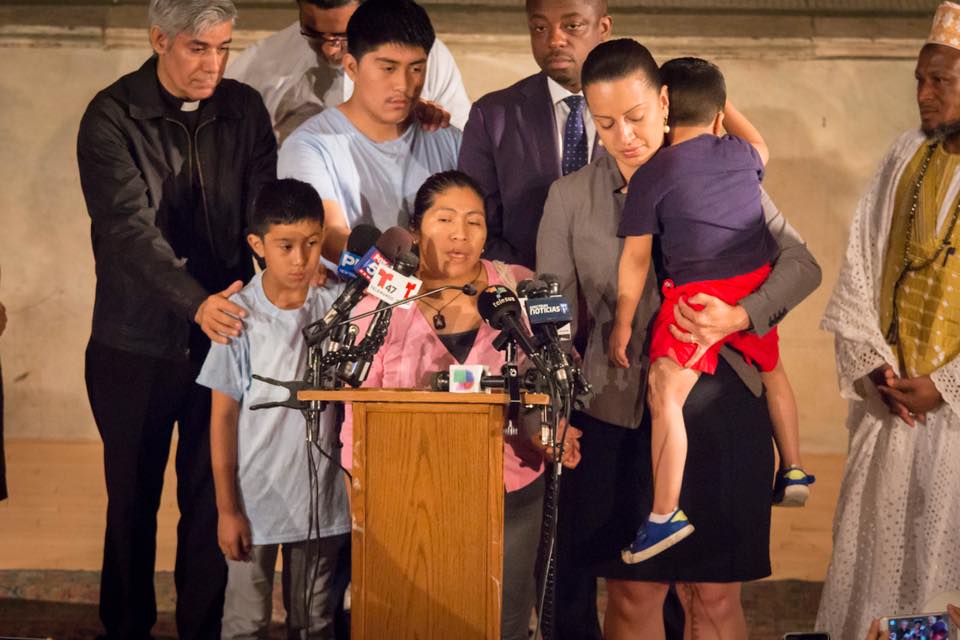 The Separated Children Accountability Response (SCAR) Act would require state-contracted facilities to provide the public reports, every 15 days, outlining the number of children being held inside their buildings. The bill also would require a report on the number of immigrant children forcibly removed from their parents, and updates on efforts to reunite them.

The SCAR Act, which State Senator Brian Benjamin and Assemblyman Harvey Epstein (D-Manhattan) plan to bring before the New York State Legislature, came out of collaboration between faith leaders, attorneys and elected officials, which built a coalition to respond to separated immigrant families. It’s just one piece of a faith community-led strategy built to care for both the children and their parents.

“This fight is about protecting the families by responding to the immediate crisis and holding the government accountable, but it’s also about the larger deportation/detention center industrial complex that is making some rich people even richer at the expense of the lives of human beings,” said the Rev. Micah Bucey, minister, Judson Memorial Church. “We are in this for the long haul, not simply for this current family separation crisis. We are paying attention, we see the arbitrariness of the rules, the immorality of the reasoning, and cruelty of the actions, and we will not shut up until ICE and our federal government are held accountable for what they are doing in the shadows.” 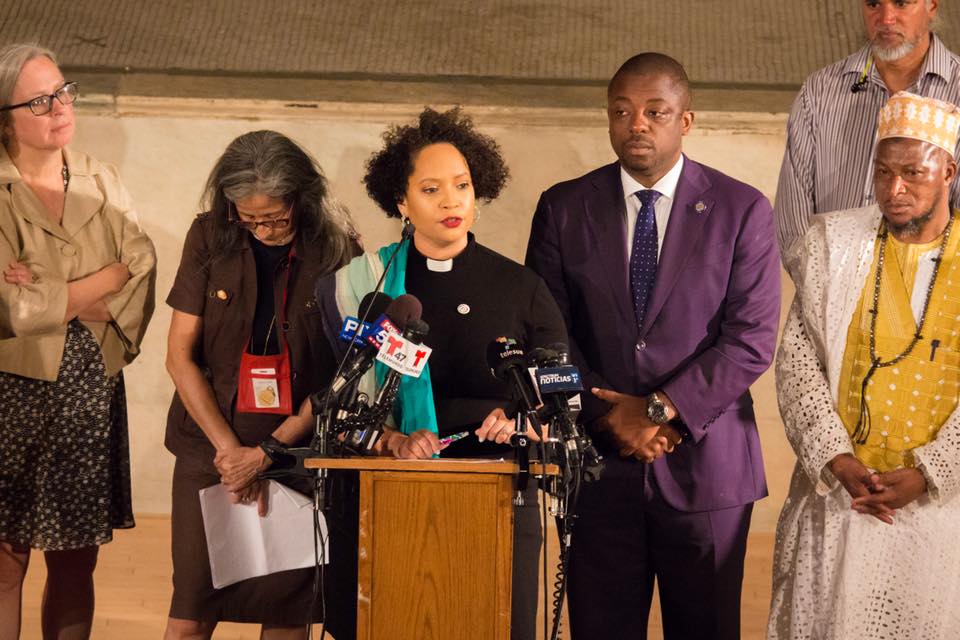 “We don’t just want this to happen in New York,” Douša said. “We are trying to make this a national thing. Republicans are supposed to be about states’ rights. As they (the federal government) kidnap people’s children, the states should have a right to know about these children – where they are, how they are housed, if they are being protected. If a place is keeping more children than they are licensed for, the states can do something about that.”

According to Douša, there is already interest in replicating this idea of accountability in Connecticut and in Virginia. She also pointed to Union Theological Seminary, creating a toolkit for the national rollout of this strategy, which Douša said is very much UCC lead. She indicated that the New Sanctuary Coalition has a sponsor for the legislation in Connecticut who is a member of the denomination. And in Virginia, a UCC minister is trying to initiate the same type of collaboration present in New York.

“The UCC is really taking a leadership role in this movement,” Douša said. “We want to make it an issue – where voters can push their elected officials to act on this legislation, so the federal government can no longer think it can kidnap children and not report about it.”

“The SCAR Act model is absolutely replicable in other states,” Bucey said. “We encourage clergy, faith leaders, and congregants to contact us to find out how to push for such legislation in their own states.”

Faith communities in New York are also accompanying immigrants to hearings and working to remove people from detention by posting bond. 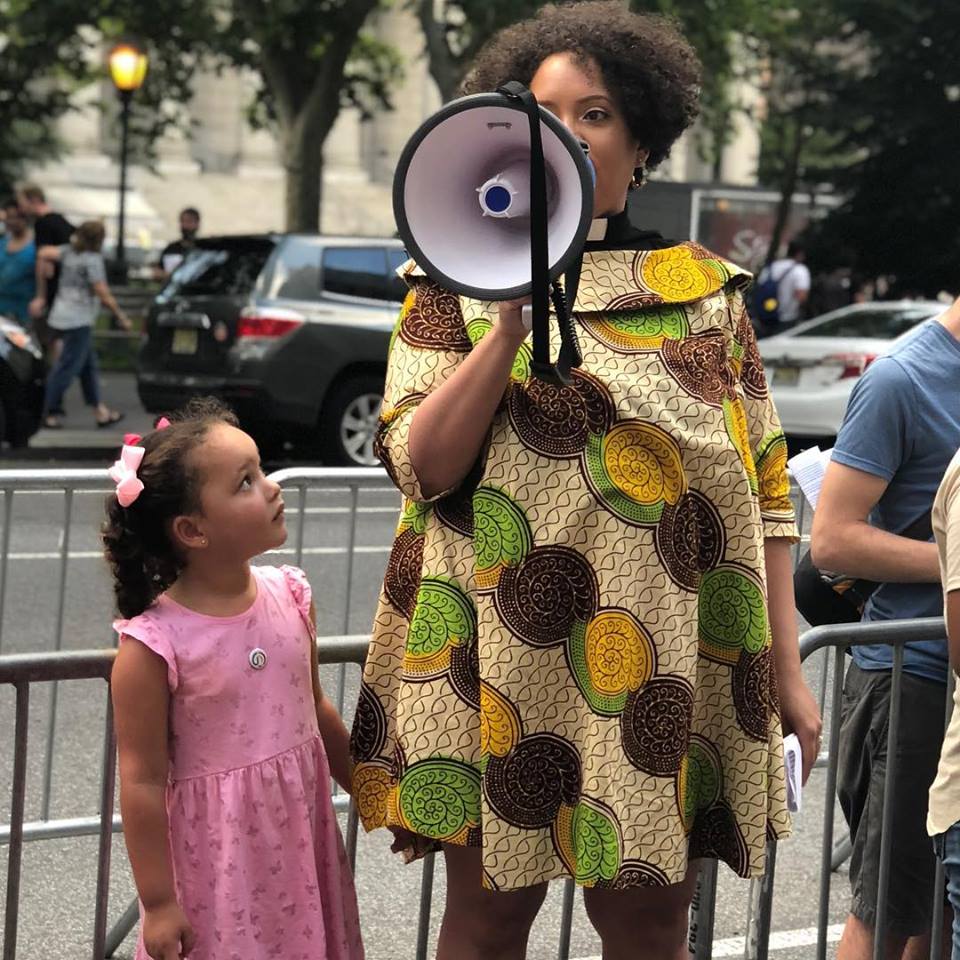 “We agreed to have clergy leaders bond people out,” Douša said. If you pay their bond in New York, because it’s a federal system, they can release people anywhere in the country. We are taking care of that here.”

They also planned a Suitcase Deportee Suitcase Solidarity March outside the Immigration and Customs Enforcement Offices in Lower Manhattan on July 26, to humanize the process of deportation.

Organizers asked participants to think about packing a small 25 pound suitcase for a loved one about to be deported, and bring one item to Federal Plaza that they would put in that suitcase. The rally Thursday evening visually represented the connection of family behind the person facing deportation in a powerful way.

“All of these actions, pushing for legislation, accompaniment for those targeted, and rallies like the Suitcase Solidarity March are interconnected, a multi-pronged strategy to get lawmakers involved, get laypeople involved and thinking creatively, and to empower immigrants to move beyond feeling helpless in order to create networks of solidarity,” Bucey said. “This system thrives on folks only knowing partial information and feeling alone. We are creating networks of solidarity and accountability that counter that system.”

“We are bringing forward the message that we are families standing up for families,” Douša said. “It’s all connected. We just want more people to realize that there are things that can be done. We aren’t helpless.”