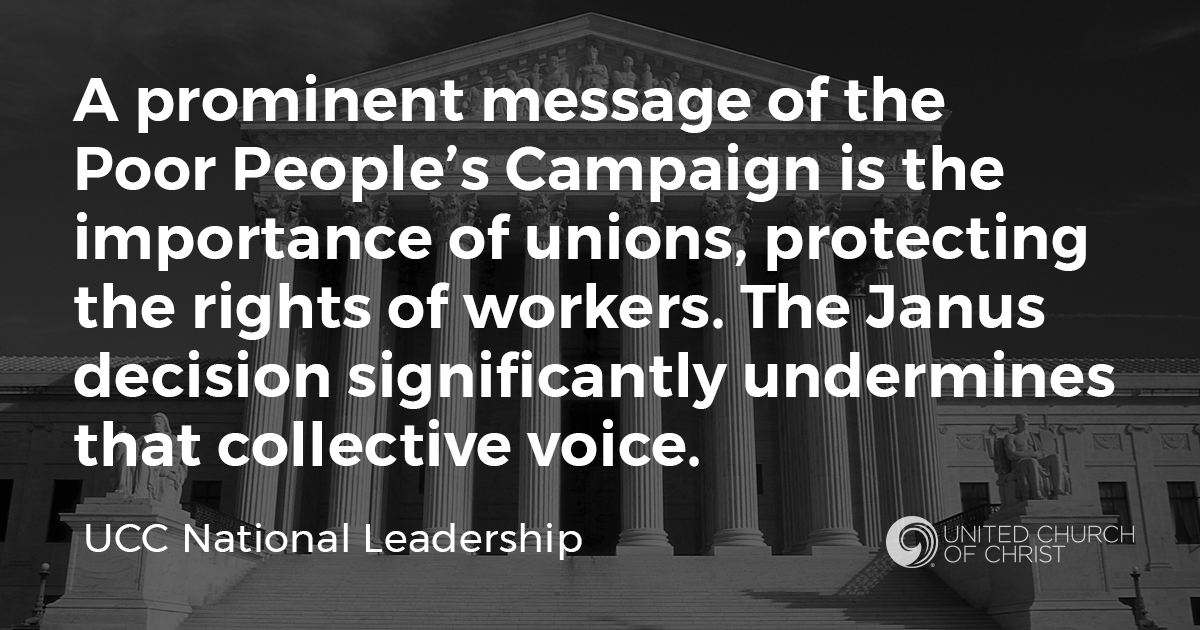 The national leadership of the United Church of Christ is denouncing the U.S. Supreme Court decision in Janus v. AFSCME. The justices ruled Wednesday, June 27 that workers who choose not to join unions don’t have to pay dues to contribute to collective bargaining.

Listen! Hear the cries of the field workers whom you have cheated of their pay. The wages which you kept back by fraud, are crying out against you, and the cries of the harvesters have reached the ears of the Lord of hosts. James 5:4

The Supreme Court’s ruling on Janus vs. AFSCME will be recorded as one of the most far-reaching rulings of 2018.

Almost half of all union workers are public sector employees and over 50% of those employees are women. A Supreme Court decision ruling public sector employees who benefit from the collective bargaining power of unions are no longer required to contribute to offset of fees used to defend and amplify that collective power will diminish the voice of those who cry out on behalf of the most vulnerable workers among us.

In Hebrew scripture the word ‘qol,’ is most often translated as voice. The word literally means to make a sound. Wherever we read this word in Hebrew scripture, whether in reference to people or God, it signifies the importance of speaking out, making a sound, letting our opinions be known about issues that matter.

It is the qol, the collective voice of labor unions, which has helped secure labor laws that are the cornerstones of workplace ethics in this country. Unions fought for the 40 hour work week, premium pay for overtime, health care insurance, and family and medical leave for employees whose singular voices would not have been powerful enough to move those who benefit most by the silencing of the poor. Shrinking unemployment rates are deceptively encouraging in the face of stagnant wages and the rising cost of living.

Who will cry out on behalf of the workers if the collective voice of the Union is muted?

The Janus decision is yet another action that threatens the power of that that collective voice.

Therefore, just as the cries of the workers have reached the ears of God, the church is compelled to also hear these cries and continue to work toward a just world in which the labor of all people is valued and deemed worthy of fair and just pay.