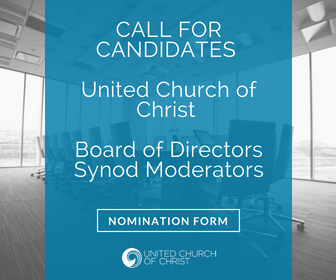 Editor’s Note: The General Synod Nominating Committee is extending the deadline in this call for candidates until December 1, 2018.

When the 16 members of the General Synod Nominating Committee begin reviewing a field of candidates to join the United Church of Christ Board of Directors in January 2019, they hope to select people with great minds and skills, and a passion to serve, no matter their age and experience level.

“The board is excited to receive nominations that represent the diversity of the United Church of Christ,” said Megan Hoxhalli, the GS Nominating Committee chair. “We are committed to having young people represented on the board and encourage nomination (and self-nomination!) of lay leaders under 30.”

The Nominating Committee’s job is to identify a dozen members to serve on the 52-member UCC Board of Directors for a six-year term from 2019 through 2025. Nominations for board members are open through Nov. 9 to anyone in the denomination. Those nominations can be submitted by conferences of the UCC, ministers, and members of historically underrepresented groups. Self-nominations are also expected and encouraged.

“With the change in governance and the UCC Boards going from 5 to 1, having the right core of people is important,” said Jean Avison, GS Nominating Committee co-chair. “More than ever we need the breadth of diversity from across the UCC to engage in this important work.”

There are specific diversity guidelines the Nominating Committee must follow to ensure the makeup of the board adheres to UCC Bylaws. Of the 52 members on the board, 36 are at-large positions, 12 of which are filled every biennium.

The Nominating Committee is now responsible for compiling a list of candidates to serve the 12 at-large seats on the board and will be submitting that report to the General Synod 2019 for acceptance. The committee will also be making recommendations on the 2021 General Synod moderator and vice-moderator — the individuals who help move the agenda of the Synod along.

After the nomination period closes, the committee will meet in mid-January to begin its selection process, with a slate of candidates ready for recommendation in early May. The 12 people chosen to become at-large members of the UCC Board will be elected at Thirty-Second General Synod in Milwaukee, Wisc., in July 2019.

“The composition of the Board is now so important as far as all the different types of work that need to be done,” Avison said. “We’re looking for engaged people that have skills in a number of different fields – the banking and legal fields for instance. These are important because Board members wear many hats, and administrate a number of various functions. The UCC needs people who are committed and have thoughtful skills in business.”

The UCC Board meets twice each year for four days, in the spring and fall and usually just before General Synod. The meetings are almost always at the UCC National Offices in downtown Cleveland.

Nominations may be submitted online on a secure page on the UCC website. Information will be treated with the highest confidentiality.