It has been a General Synod for the record books in Cleveland 2015, with UCC delegates celebrating a history-making ruling by the U.S. Supreme Court-making marriage equality the law of the land, continuing the work for just peace in Israel/Palestine, and electing a new general minister and president to chart a course for the  future of the denomination.

The Rev. John C. Dorhauer was overwhelmingly elected to serve as the UCC's ninth general minister and president. He takes over the reins from the Rev. Geoffey A. Black, who is retiring at month's end. During closing worship on Tuesday evening, June 30, Black presented his successor with a stole, a symbol of the new leadership role Dorhauer is stepping into, reflecting his calling to do new things.

"There is no one better to lead our denomination," writes the Rev. Kristina "Tina" Campbell, of Phoenix, Arizona in an online comment, "John Dorhauer will lead us all. Let's get on with the work of the church . . .  .  I thank God for his presence in our lives." 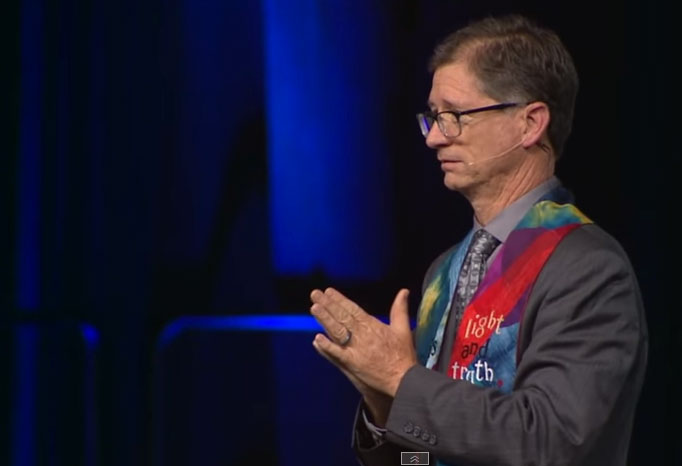 Dorhauer is already sharing his strategy for moving the church forward in a new time, articulating a plan that revolves around "connection and convergence." Building closer ties, reconnecting local churches with the national setting. Broadening the UCC's missional base through strengthened partnerships with like-minded people and groups--both interfaith and ecumenical partners and secular entities. Emphasizing spiritual practices that connect with the Holy Spirit and the divine. And, to step out on faith.

"I want you to prepare to fail," Dorhauer said. I want you to give yourself permission to take risks and then be there to receive the risk-takers with grace when they fail, and to learn from those failures and pass on what we learn to others."

The denomination's next president hopes the people of the UCC use the power of the church, as a progressive faith community, to speak for those who have no voice.

"Dorhauer's theological, biblical and preaching skills are exquisite," writes the Rev. Stephen Wayles, in another online commentary. Wayles, part of the search team that called John Dorhauer to be president and minister of the Southwest Conference UCC, writes that the team predicted the conference would lose him to the presidency of the denomination.

"John is intensely ecumenical - and knows how to stand up for the practices and theology of the UCC. John is a Spirit filled, Christ following person of God. His action for justice is based in scripture and prayer, and John is one who walks alongside those suffering injustice and oppression. He understands that we worship because of God's love for all - and we worship in order to do mission."

"We must admit we have some work to do, and I'm confident that John understands that work," said the Rev. Traci Blackmon. "He looks at the fault lines that divide us and takes the steps to cross them."

"I'm grateful for Rev. Geoffrey Black and all our previous presidents,” writes Wayles.” And I'm grateful that in my retirement, John Dorhauer is the president of the church to which I was a convert and which I love. I believe that Rev. Dorhauer's spiritual and vocational pilgrimage, his vision and commitment to God's reign of justice and peace on earth, his passion for the creation, the church and the world's people make him the president for this moment in history."