Faith leaders rally on Capitol Hill to save health care 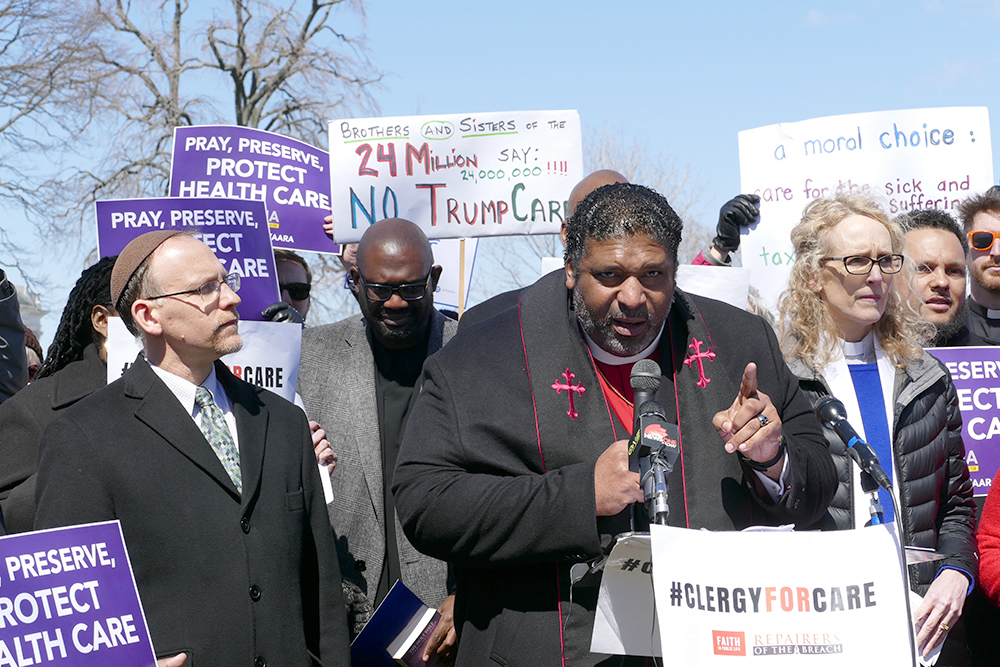 Jesus Christ never asked for an insurance card, nor required a co-pay. That line, spoken by the Rev. William Barber II, could be considered the rallying cry of hundreds of progressive people of faith gathered in Washington D.C. on Wednesday, condemning Congress’ attack on health care and demanding a moral commitment to health care reform for all Americans.

A day before the expected vote March 23 by lawmakers on a bill to overhaul the health care system, faith leaders rallied the public in a march on Capitol Hill, delivering copies of sacred texts to the offices of House Speaker Paul Ryan — sharing the stories of how Christ, the Great Physician, healed the sick and the poor.

Barber, a Christian Church (Disciples of Christ) minister in North Carolina, president and senior lecturer of Repairers of the Breach and architect of North Carolina’s "Moral Mondays" movement, was one of the speakers at a rally on Wednesday afternoon. The event was organized by Faith in Public Life, an interfaith movement for social change.

House Republicans have introduced a proposed alternative to the Affordable Care Act, or Obamacare. The bill, according to health care experts, would cause millions of Americans to lose their medical insurance, while millions of low-income families would see a decrease in coverage and rapidly rising insurance costs.

Sandy Sorensen, director of the United Church of Christ office on Capitol Hill, said that the House's bill, the American Health Care Act, is out of step with the need to continue expand medical coverage for vulnerable people still without insurance.

"Healing is at the heart of Jesus' ministry and teaching. It speaks to the common human need and yearning for health and healing," she said.

"The House plan will put access to care out of the reach of millions of people in this country, and will especially impact the poor, those with disability, and the elderly," Sorensen said. "People – including those in our pews, in our communities and in our families – will suffer. It is imperative that we transform health care so that it is inclusive, accessible, affordable and accountable. This bill takes us in the wrong direction."

If the bill passes, not only would it hurt working families, the elderly, children and people with disabilities, it would benefit the wealthiest Americans. The top 0.01 percent of earners will gain on average more than $197,000 each in tax breaks. According to analysis from the Tax Policy Center, "Most low-income households would see no change at all in their taxes. But about 7 percent would get a tax cut of about $1,200 on average while 4 percent would face a very big tax hike, averaging nearly $3,900 — mostly because they’d lose the benefit of the premium subsidies."

"We need to show this is a bill rooted in classism, racism, anti-woman," Barber said. "When all of this is done, thousands of people of all colors will die. These are not souls whom the Lord is calling home. These will be people who will have died because of government policy. They are poor and elderly sisters and brothers. When our elected representatives commit to immoral action, we have no option but to resist by all nonviolent means available to us."

A tight vote is expected, because of opposition to the bill among the Republican members of the House who want to fully repeal the ACA. If the bill were to fail, the ACA would remain in place — though lawmakers intent on repealing it would attempt to roll back health care protections once again.

More information about the UCC's health care justice work, and ways to get involved, is available here.