Connecticut, Massachusetts and Rhode Island Conferences vote to go forward Together, As One 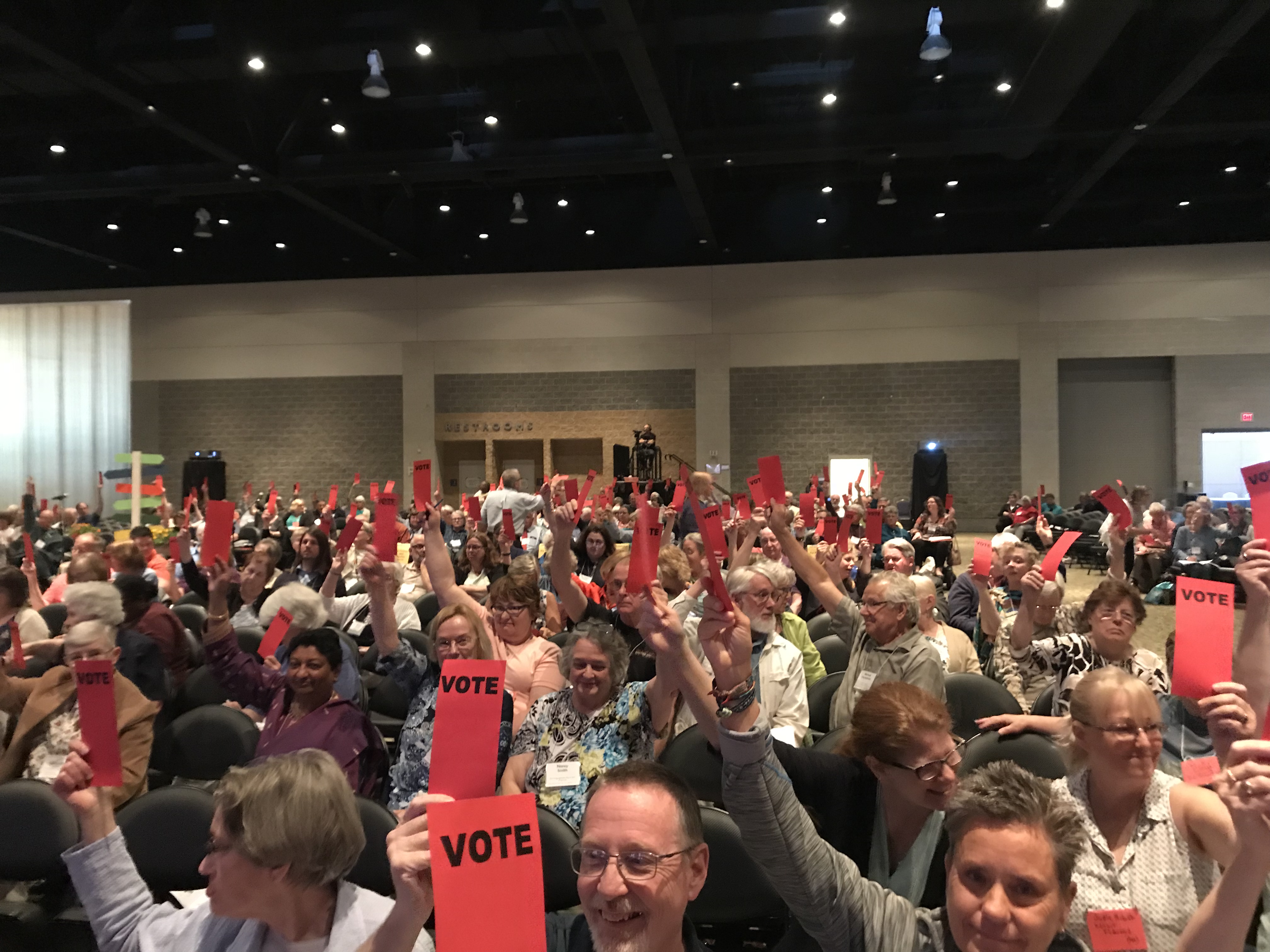 The Connecticut, Massachusetts and Rhode Island Conferences of the United Church of Christ made history Saturday, June 16, voting overwhelmingly to form a new unified Conference in which they will not only do ministry together, but to which they will invite other religious and secular organizations to join.

In separate plenary sessions held at their second joint Annual Meeting, the three Conferences voted to approve a covenant agreement and new set of bylaws establishing the new Conference, and they elected a new united Board of Directors.

“UCC History was made today,” said the Rev. John Dorhauer, UCC General Minister and President. “Signaling to the wider church that we can accomplish more together than apart, that we live in an interdependent world in which we all need each other, and looking to maximize the use of precious mission resources, delegates to this tri-conference annual meeting voted to carve out a new pathway for what we hope will be new life, new vitality, and new relevance.”

“It is my fervent hope and prayer that covenant partners around the life of this denomination will likewise test their own vision and courage in response to a Holy Spirit who is inviting us to join Her in explorations and innovations that open us up to new possibilities,” he continued.

A year ago, delegates from the three Conferences voted to pursue the possibility of uniting; this year, they voted to give official form to the new, combined entity.

“Today we affirmed that we need each other,” said Connecticut Conference Minister the Rev. Kent J. Siladi. “We attended to the Holy Spirit’s movement in our gathering and we moved forward with a commitment to making an impact and making a difference in this God-so-loved world in which we live.”

“Let it be said that at this gathering people of faith were filled with hope and joy, peace and love, and agreed that together we are called to live the love and justice of Jesus,” Siladi said.

The Rev. Barbara Libby, Interim Rhode Island Conference Minister, said the vote shows that “in spite of all sorts of other differences, we do share the notion that following Jesus Christ does and will continue to transform us, our churches, and even our planet.”

The Rev. Traci Blackmon, UCC Executive Minister of Justice & Local Church Ministries, preached at the Annual Meeting on Friday evening, and asked those gathered: “Have you ever trusted God enough to step into the water, not knowing how you would make it across?”

Her words resonated with many in attendance, who time and again referred to getting their feet wet as a metaphor for daring to step into a new future together.

Before she left Saturday, Blackmon called the vote exciting and unprecedented.

“It marks a change in ministry that’s going to be needed for church to move beyond the walls again,” she said. “We are fortunate that these three Conferences are courageous enough to lead us in this.”

The new Board of Directors – which consists of five members and two officers from each of the three Conferences – will now begin the task of determining how the new entity will be structured.

For example, the Annual Meeting of the Episcopal Diocese of Western Massachusetts last fall passed a resolution calling for a "Deeper Community, Service and Engagement" with "United Church of Christ Partners."  Down the line, the Diocese could become an associate member of the new Conference.

“For over 200 years Protestantism in America has offered a denominated witness to Christ’s call for justice and love,” said Massachusetts Conference Minister and President Jim Antal. “Going forward we have an opportunity to come together, particularly in our current political context dominated by morally bankrupt values. What we did today was a first step. We need institutions to carry the weight of social change. They also offer symbols that can bring people together. That’s our profound hope.”

Tiffany Vail is the Associate Conference Minister for Communications of the Connecticut, Massachusetts and Rhode Island Conferences United Church of Christ