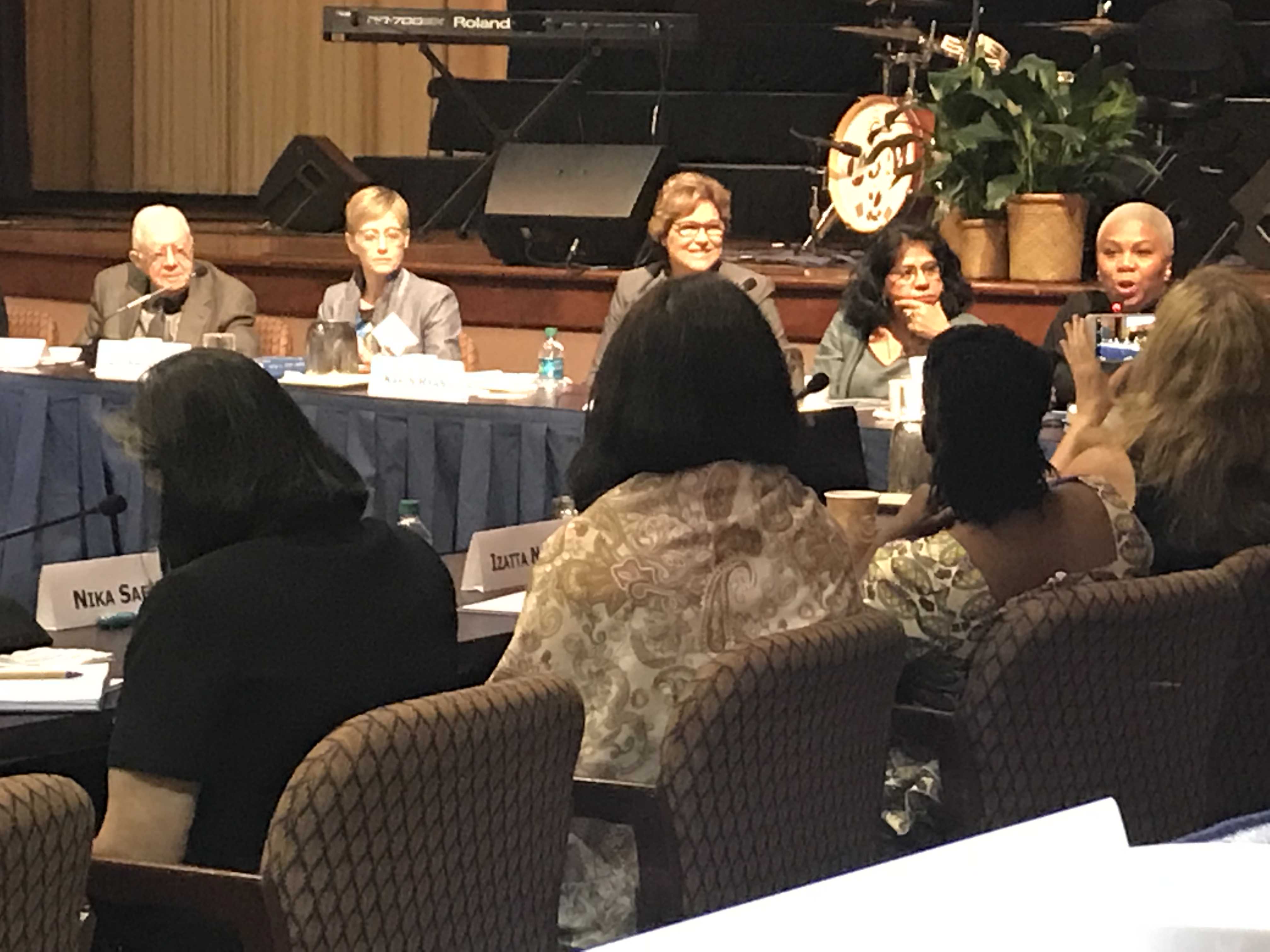 The United Church of Christ's Rev. Traci Blackmon shared a message of love, equality, determination and hope with a global gathering of human rights defenders at the Carter Center in Atlanta on Tuesday, July 24.

Blackmon, Executive Minister of Justice and Local Church Ministries, was invited to participate in a panel discussion around human rights titled "Restoring Faith in Freedom," and asked to speak to the group representing 36 nations during the forum's final session, after remarks by former President Jimmy Carter.

For 36 years the Carter Center has been emphasizing peace and human rights. The premise of this 11th meeting of the Center's annual Human Rights Defenders Forum, July 21-24 — To restore faith in freedom, we need to broaden our concepts of faith to include a growing confidence in each other and in democracy itself, and we must broaden our ideas about freedom—that freedom from want is equal to the freedom from other forms of tyranny — dovetailed perfectly with Blackmon's remarks.

Beginning from the premise that human dignity is the "Divinely inherited right of every human being," Blackmon talked about faith, "something we believe in, something in which we anchor ourselves," that gives people the courage to persevere.

The group, dozens of activists, peacemakers, and religious and community leaders from around the world, gathered Tuesday morning to affirm that premise. Some of those present have witnessed the murders of family members because of oppressive regimes. Others are regularly threatened with death. They came together for solidarity, and to form strategic alliances. To talk about finding ways to restore trust in democratic governments. They spent three days discussing how to advance the issue through economic and social rights, building faith in institutions, and finding faith in each other.

Musician Peter Gabriel set the tone of the Tuesday discussion during his taped introduction when he talked about how people of the world have lost faith and trust in the institutions of democracy, and how human rights must be a necessity, not a luxury, available to all.

"The world at large benefits and progresses when fundamental human rights are embraced and enjoyed by everyone," Gabriel said. "We need to protect, champion and defend all those rights."

Former President Jimmy Carter expanded on his friend Gabriel's remarks, as he also touched on faith, and the need to reestablish the basic principles of faith in the world.

"I read the Bible most carefully on verses on faith, and one of the most startling ones to me was when Jesus said, ‘When I return to earth someday, will I find faith on earth?' That's a basic element, I think, of legitimate doubt," Carter said. "We have lost faith in some things we have long taken for granted." He talked about the need to restore faith in freedom, faith in democracy, and faith in the commitment to equality of treatment of all people in societal interrelationships.

The Rev. Jim Antal, recently retired Massachusetts UCC Conference Minister and Special Advisor on Climate Change to the UCC General Minister and President, said that restoring faith in the continuity of creation, jeopardized by seven generations of human greed, is also critical, since "climate change amplifies every form of injustice including the injustice of violating human rights."

Antal also affirmed the high level of perseverance among the people in the forum. "I have never been in a gathering where I have felt a greater concentration of courage," he said. "I am so grateful to every one of you who have contributed to that and will take that courage back to your countries."

President Carter and the front line human rights defenders from 36 countries are calling on citizens and governments around the world to address the unequal treatment of people worldwide based on their race, gender, nationality, ethnicity, religion, or social and economic status.

"All human beings are equal in the eyes of God," Carter said. "And it is the duty of each one of us to realize this mandate from our common Creator."

"Faith is essential to the pursuit of human rights," Blackmon emphasized. "And because of our faith, we persist through moments of panic and fear because on the other side of panic – our HOPE remains."