With prices of commercial real estate soaring in downtown Cleveland, the officers of the United Church of Christ are exploring the value of the building that has housed the denomination’s national offices for more than two decades.

Listing the Church House building and the adjacent hotel the UCC owns and operates for sale isn’t an indicator that the offices would relocate. Rather, it represents a chance to proactively gauge potential offers as financial stewards of the church’s assets, says the Rev. Geoffrey A. Black, UCC general minister and president.

“It’s an opportunity, given what’s going on all around us, to be good stewards of the church’s resources, and use those resources to advance and support the ministry and mission of the UCC,” Black said. “Considering the sale of the building will enable us to do that—to support the whole church to engage in God’s mission.”

Even if the building sold, Black and Lee Foley, UCC chief administrative officer, reiterated that the national offices of the church will remain in Cleveland.

“No matter what happens, we are going to stay in downtown Cleveland,” Foley said. “We were the first major property owner in this part of Cleveland in the early 1990s. It was a very blighted area, and now it’s vibrant and teeming with people. The UCC was largely responsible for getting that turnaround to happen.”

Black added that there will still be an Amistad Chapel if a sale takes place and the staff moves to a new location. “We are committed to having a chapel no matter where [national staff] end up,” he said.

“We considered our role in the downtown area, being a church presence in this growing residential neighborhood, and we are cognizant of that,” Black said. “But we are also cognizant of other areas that could be beneficial to the Cleveland community.”

In the fall, the national officers asked Foley to explore the possibility of what the building and hotel might be worth on the market. Shortly after, a major Cleveland commercial real estate developer announced a massive new project immediately west of the Church House, causing values of neighboring properties to skyrocket. The development project property, which is several parking lots and a condemned building, sold for $26 million.

Other buildings in the neighborhood, known as the Gateway District, have sold for what Foley called “undreamed of values compared to a few months ago.” The area was mostly undeveloped two decades ago when the UCC relocated from New York. In time, two professional sports teams (the Cleveland Indians and Cleveland Cavaliers) built a baseball stadium and basketball arena within two blocks of the UCC’s offices, and renowned chefs opened some of the city’s best restaurants in the neighborhood.

Both the boards of Hotel Venture LCC, and 700 Prospect Corp., which govern the adjacent hotel and the Church House building, authorized Foley to work with a commercial realtor to place the buildings on the market to see what a potential buyer might offer. Newmark Grubb Knight Frank was hired to represent the national offices and began marketing both properties in high-end publications. 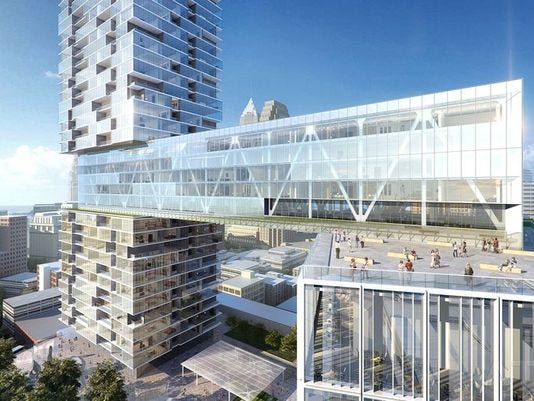 A concept drawing of the new downtown development, which will include a hotel, apartments and retail space. Photo via Stark Enterprises.

With the building listed for sale, there are four possible courses of action if a buyer made an offer: sell both the offices and hotel and lease the necessary space from the buyer; sell both properties and relocate the offices to a different building; sell either the hotel or the offices, and keep the other; or do nothing and keep both properties.

Black acknowledged that the timing of listing the buildings for sale was ironic, given that Cleveland is hosting General Synod 2015 in June, but reiterated that with the way the real estate market shifted rapidly, “it was the right time to look into listing the property.”

“Given the fiscal reality of the day, we would be derelict not to explore our options,” Foley said.

How do you build an effective stewardship campaign?  Ask a pastor who has done just...

At General Synod, when the business focused on finance and budgets, the talk turned once again to...