My “Conversation” with the Pope: Ecumenical Bonding over Creation Care and Coffee

In his encyclical on the environment, the pope says that he wants to be in “dialogue with all people.” I have been imagining what it would be like to take him up on this offer—literally, perhaps over coffee. Compliments are always a great place to begin, so I figure I would start by giving him a couple of high fives before getting to a few burning topics. 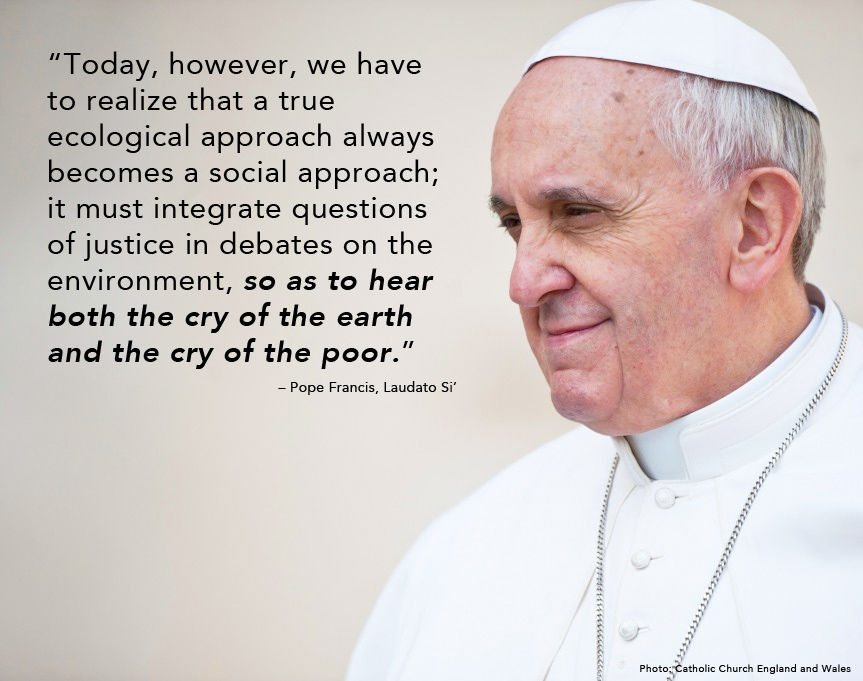 The first high five would be for his environmental theology. The pope pointedly refutes theologies that interpret the opening of Genesis as a mandate for humans to rule tyrannically over all of creation. As an alternative, he instead proposes that God’s gift of creation necessitates an ethic of mutuality and solidarity, of love and care. For too long Christians have suffered from “anthropocentrism”—a fancy way of saying we need to get over ourselves and start caring for the world around us. When love directs us outward, the pope notes that it is not only concerned with immediate relationships but also with the larger world with all its economic, political, and social dimensions. Love propels us to care about giant-size wrongs and injustices. In a world dominated by individualistic piety, how refreshing to hear a prominent religious leader with such a broad perspective!

A second high five would be for the pope’s critical understanding of our economy and how the desire for more and more profit leads to the perpetual exploitation of both the poor and the environment. He excels at highlighting interconnections on this front. He reminds us that it is the poor who often suffer the most when air quality declines or weather disasters strike. His analysis further points to the ongoing legacy of colonial imperialism. He describes how the wealthy industrialists of the global north have pillaged the global south for raw materials while leaving toxic pollution in their wake. For using his holy megaphone to draw critical attention to the environmental injustices of the world, the pope certainly deserves a high five of resounding gratitude!

Before our coffee chat ends, however, there are a few other matters I would want to discuss. First, I would suggest that during his visit to the United States he give some attention to the intersections of race and the environment. Studies show that black people are more likely to breathe in higher levels of air pollution than whites. They are also more likely to live within 30 miles of a coal plant, the high exposure zone for the pollutants that cause afflictions ranging from birth defects to heart disease.

Second, I would want to explore with the pope how people of different faiths might come together to promote the kind of policies for which he calls—policies that shift our planet away from fossil fuel use to renewable energy. On Ash Wednesday, could Christians of diverse faiths join together for worship outside coal plants and corporate headquarters as we call for a national moment of confession and repentance? During the season of Lent that follows, could we then call upon our elected officials to put our nation’s economy on a permanent carbon fast as soon as possible?

While my conversation with the pope may be imaginary, it does lift my spirits and inspire bigger dreams. Maybe this Sunday preachers everywhere should ask their flocks, “If you had coffee with the pope, what would you say? What are your hopes for how people of faith can put love into action?”

The Rev. Brooks Berndt is Minister of Environmental Justice for the United Church of Christ.