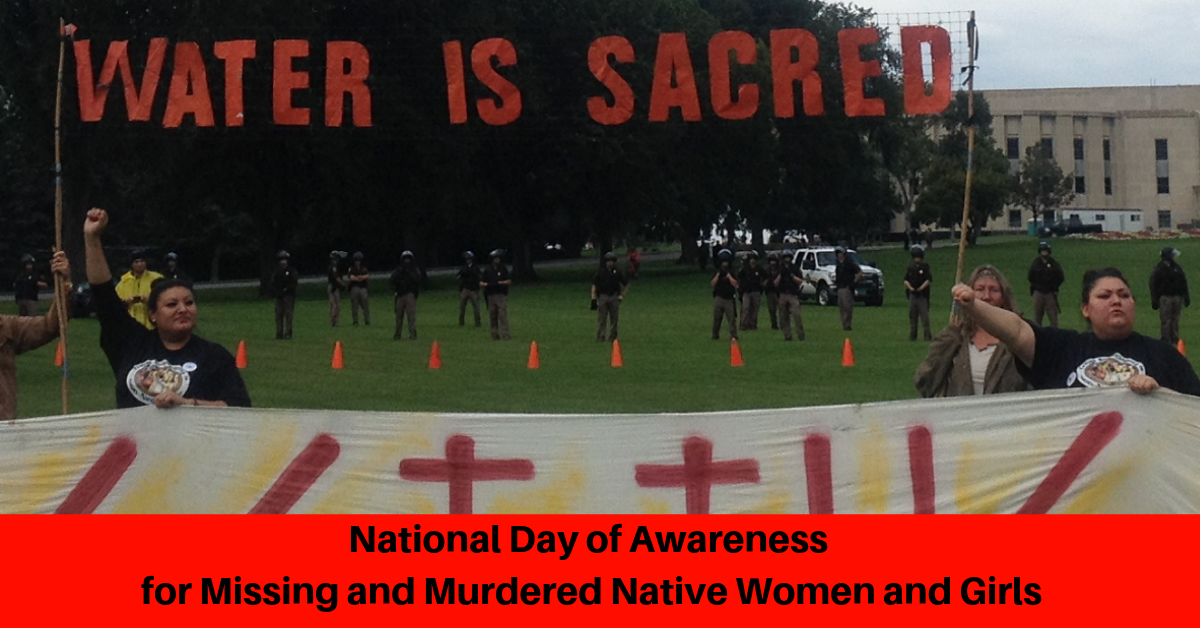 Sunday, May 5th, will mark the National Day of Awareness for Missing and Murdered Native Women and Girls.  The day was chosen to honor the memory of Hanna Harris, a young citizen of the Northern Cheyenne Tribe who went missing from her reservation in Montana in 2013. She was found murdered a few days later.

The U.S Department of Justice found that American Indian women face murder rates that are more than 10 times the national average.  For 2014, the Centers for Disease Control and Prevention Homicide reported that for American Indian and Alaska Native women homicide was the 3rd leading cause of death among those between 10-24 years of age and the fifth leading cause of death for those between 25 and 34 years of age.

One of the most significant drivers of violence against Native women has been the extractive and exploitative practices found around fossil fuels.  Twelve of the North Dakota’s top oil-producing counties accounted for a significant increase in violent crime—particularly against women.  The cause for this is the camps of thousands of male workers who came to the territory to profit from the Bakken oil boom – settling into what are commonly called “man camps,” and more than doubling the population with an influx of non-Indian oil workers over which Native police have little legal control.

As more pipelines are approved, “man camps” are created with transient male workers who take advantage of vulnerable Native women to create more violence and death.  Lisa Brunner (White Earth Ojibwe) said, “They treat Mother Earth like they treat women.  They think they can own us, buy us, sell us, trade us, rent us, poison us, rape us, destroy us, use us as entertainment and kill us. I’m happy to see that we are talking about the level of violence that is occurring against Mother Earth because it equates to us [women]. What happens to her happens to us.”

May Boeve, 350.org Executive Director has said: “We cannot ignore the connection of oil extraction and pipeline construction to growing numbers of missing and murdered Indigenous women and girls. It’s another grisly example of Big Oil’s horrifying human rights record. We must stand in solidarity with Native women defending their sovereignty and their safety from the fossil fuel industry’s extractive and violent practices.”

This Sunday, I will be wearing red and joining my Native sisters and brothers, siblings and cousins, to line the Rims around Billings, Montana in awareness of this violence done to Native people and Mother Earth.  We will step forward as one to say that the Native voice is rising as we say with Crazy Horse, “We and the land are one.”

As LaDonna Brave Bull Allard, Standing Rock Sioux elder, has said, “The abuse of women is well known in history, and tells you a lot about what is happening to our earth.”

The Rev. Michael Mulberry is the Senior Minister for Billings First Congregational Church in Billings, Montana.