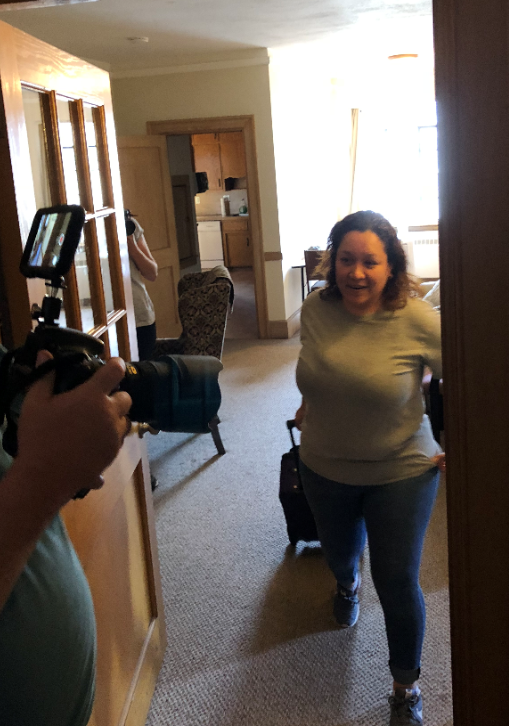 A UCC congregation in Springfield, Mass., is celebrating with a Peruvian mother saved from deportation though sanctuary. On June 11, Gisella Collazo was able to leave South Congregational United Church of Christ, her home for the past three months, after she was granted a one-year stay of removal by a United States District Court.

“Today I feel happy because I will be back at my house with my family. I will be able to do things independently again, take my children to the park and live our normal life,” Collazo said in a statement. “I know that I have been very fortunate to have the opportunity to stay here with my family and receive visits from friends.”

Collazo and her two American children, 11 and 4, had been living in a two bedroom apartment at the back of South Congregational Church since March 26, after Immigration and Customs Enforcement ordered her to return to Peru the next day.

“We are glad that the persecution of our sister and her family has ended,“ said the Rev. Tom Gerstenlauer, pastor of South Congregational UCC.  “We are glad that this essential building block of community, the family, has been restored. We are glad that God has given us wisdom to recognize injustice, encouragement to welcome Gisella into sanctuary, and a Spirit of celebration for this outcome.“

Collazo settled in Massachusetts when she came to this country in 2001, and married a U.S. citizen in 2005. She received a work permit a year later, and began the process to become a citizen. However, legal mistakes were made, and she was targeted for deportation during her January check in with ICE. The UCC church and the other faith communities organized as the Springfield Interfaith Sanctuary Coalition took her in, reported her circumstances to ICE, and she was bound with an ankle monitoring bracelet.

On Friday, that ankle bracelet was removed, and on Monday, she and the children were able to return home to their husband and father.

“Many families are not as fortunate and are being separated every day around the country,” Collazo wrote. “I want to thank South Church, Pioneer Valley Project, the Springfield Interfaith Sanctuary Coalition and the community for supporting me in this process.”

Community support became very visible in this case after Springfield Mayor Domenic Sarno tried to intervene. The mayor, noting that Springfield was not a sanctuary city, accused South Congregational of violating building, housing, and health codes, threatened the church’s tax-exempt status, and ordered inspections for code violations. The Springfield City Council later passed an order that prohibited the city from interfering with a house of worship’s provision of sanctuary.

Collazo’s stay of removal does not change her immigration status, but does give her and her attorneys the time to work through her application for citizenship.

“We are grateful to the many faith leaders and people of faith and justice who have been a source of support for Gisella and for South Congregational Church,” said Tara Parrish, director of the Pioneer Valley Project. “We know that Gisella’s case has been very public and that there has been much interest in Gisella’s story. Today we also celebrate that Gisella and her family can return to their lives as private citizens.”