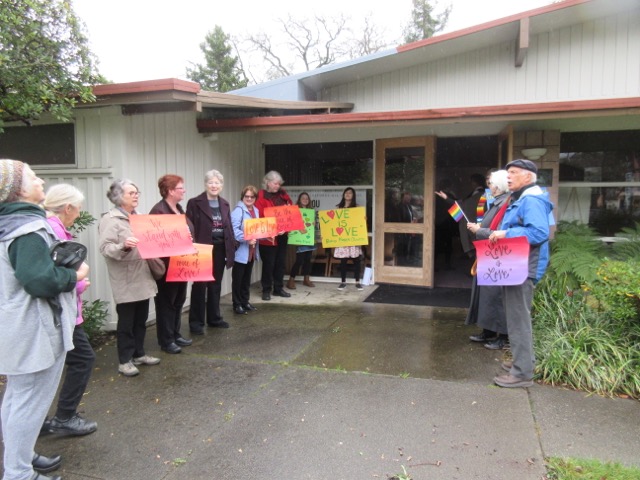 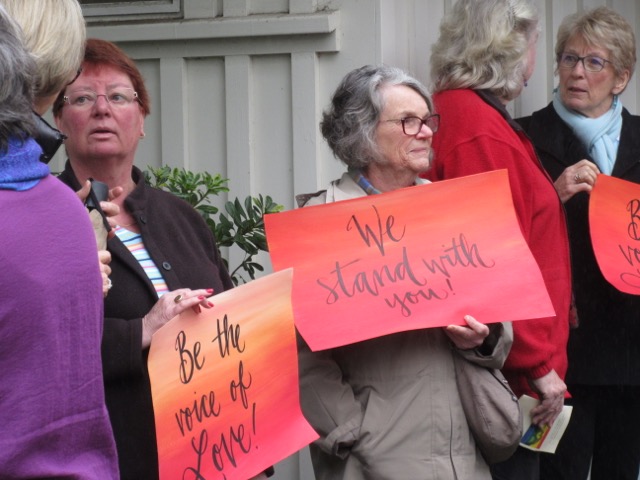 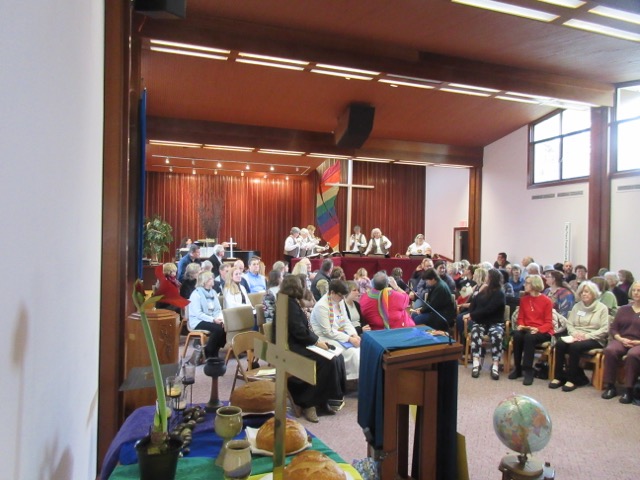 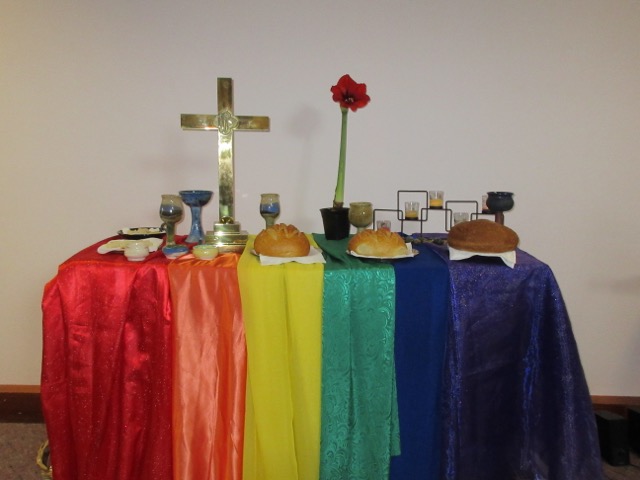 In the Northern California communities of Sonoma and Santa Rosa on Sunday morning, UCC clergy and their congregants went to worship with their local Methodist friends, attending their services as part of an interfaith gathering of solidarity and support.

“It occurred to me that I could stay in my pulpit and preach to the choir, but that feels to me a little like building huts on the mountain and celebrating the progress of the UCC. I feel compelled to get back down the mountain and support the people who are strewn throughout the valley, having been devalued, dehumanized and told they are not full members of the family of God,” said the Rev. Curran Reichert, pastor of the First Congregational Church Sonoma (FCCS). “Yes, it will mean a dent in the offering and disruption in the routine, and sometimes it is in the disruption that we discover again who we are called to be.”

After the United Methodist Church voted last week as a denomination to continue to ban same-sex marriage and LGBTQ clergy, Reichert and the Rev. Anne Hoffman, interim minister of First Congregational Church Santa Rosa (FCCSR), moved quickly to reach out to local Methodist ministers who have long supported inclusive love.

The UCC ministers joined the Methodists in worship on March 3; Hoffman joining the early service at the church in Santa Rosa, with Curran and the majority of the FCCS congregation attending the 10 a.m. service at the Sonoma United Methodist Church. They took their Communion bread and coffee hour snacks, putting their faith into action.

“Sonoma United Methodist Church (SUMC) has long stood as a welcoming denomination and is currently home to the first married, same-sex clergy couple to openly serve in the denomination,” Reichert wrote to her church community after the vote, noting the vulnerability of gay ministers serving openly. “As an act of support and solidarity, FCCS and SUMC, with delegations from St. Andrews Presbyterian Church and Trinity Episcopal Church will share a joint worship service. All clergy are invited to concelebrate Communion and help offer healing prayers. Though there is much discussion about whether this decision will split the Methodists, there is an abiding love of unity that might prevail.”

In California on Sunday morning, both love and unity not only prevailed… they flourished.

“Members of Sonoma UMC were welcomed to their own church on Sunday morning with signs of peace and love. The sanctuary was overflowing with people and was decorated with rainbows,” said the Rev. Emily Pickens-Jones, SUMC co-pastor, who noted there were ten clergy members present during worship. The message was clear: all people are welcome in Sonoma United Methodist Church.

“We were Jewish and Presbyterian, UCC and Episcopalian, but we were a multitude and we were powerfully claiming our place at the welcome table,” Reichert said. “We stood with signs of love and support lining the sidewalk as the members of SUMC arrived to church. Some cried, some high-fived, but everyone felt the power of the church at its best, one body, one heart beating as one to the rhythm of hope.”

Pastor Jacey Pickens-Jones, SUMC’s other co-pastor, preached about the service as a transfigurational mountain top experience. “This worship is a glimpse into the Kingdom of God,” she said, “but it’s time to go down from the mountain out into the world to spread God’s love to all.”

“This has been a devastating week for the global United Methodist Church, a church that we dearly love,” Emily Pickens-Jones continued. “We are committed to living our faith with integrity and that means we believe in full inclusion of all God’s children into the church. We hope that this worship can show our community that we welcome all.”

All across the country after the UMC decision, UCC clergy reached out to their colleagues in the UMC faith community to offer support, to pray for justice and full inclusion, and to weep with those who weep.

On February 26, the day of the Methodist General Conference vote, the National Officers of the United Church of Christ issued an open letter to the United Methodist Church, offering prayers for the denomination and the Body of Christ around the world.

“As a uniting communion called to find the common ground in support of a hoped for vision of unity within diversity, we suffer alongside our United Methodist kindred who today feel the deep pain of a new brokenness,” the letter reads. “Know that we stand ready to serve all who are in need of healing and all who seek simply to know the power of the risen Christ fully articulated in the expression of a love that knows no bounds.”

The churches of the Central Pacific Conference UCC issued a statement on February 27, grieving with Methodist siblings after the UMC General Conference decision. “The judicial decision made yesterday in the United Methodist Church did not reflect God’s inclusive love,” said the Rev. Molly Carlson, Conference Minister. “We hold in prayer, all those who were harmed by this week’s debates and decision. We pray for the day when justice and full inclusion will come.”

As Curran said, “May each of us in our own way continue to chose love; all the time, every time.”