At the core of democracy is the foundational principle of voting. It is the most fundamental access point for individuals to engage in the public dialogue and have a voice in the public policy decision-making process that can shape the future of our local, regional, national and global collective life. President Roosevelt once said, “Nobody will ever deprive the American people the right to vote except the American people themselves and the only way they can ever do that is by not voting.”

He was only partially right. In too many ways and for too many years the right to vote for many Americans has been denied and delayed, not because they didn’t want to vote, but because they were actively being marginalized and excluded from the voting process. This disenfranchisement comes in many forms – many historically overt – such as laws not allowing black people, women, and, basically, anyone who wasn’t a land-owning white man, the vote.  As history marched onward so did laws to open up voting rights to all Americans – including the 19th Amendment, which said no one could be denied the right to vote based on their gender, and the 1965 Voting Rights Act that made it manifestly clear that states could not institute policies making it more difficult for black voters to exercise their rights and counteracting the Jim Crow laws that had massively suppressed voting. 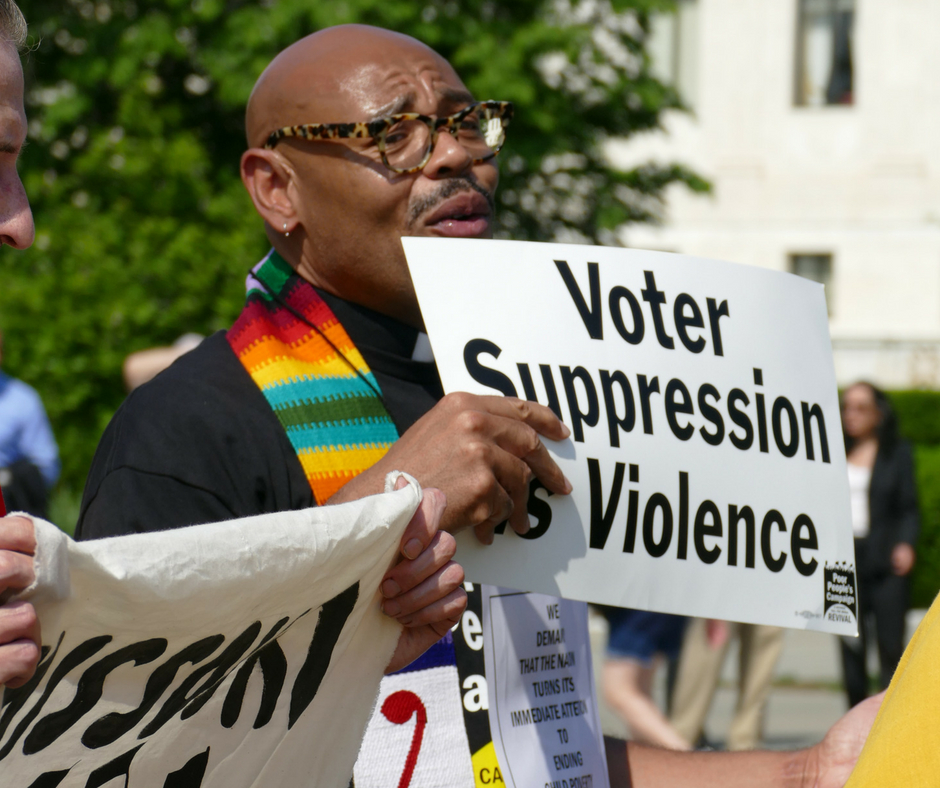 Sadly today we are seeing rollbacks to voting rights all across the country and a contraction of the promise that every citizen has the right to vote. The Shelby County v. Holder decision of the Supreme Court in 2013 essentially eliminated key provisions of the Voting Rights Act which now has allowed states to move forward with voting restriction provisions that have the potential to significantly restrict and suppress voting rights. There are a number of insidious practices being implemented at the state and federal level, in the guise of preventing voter fraud, that actually serve to disenfranchise many potential, and rightful voters. These measures include excessive voter ID requirements, purging of state voter rolls, instituting confusing voter registration rules, limited and reduced early voting options, and the restriction of rights of people who have been convicted of felonies. In 2016 17 states tried to implement stricter voter ID requirements for voting – in many cases those laws were overturned by local and federal courts – but it is disconcerting to see how many states are working to restrict people’s access to voting.

Civil rights organizations have long decried restrictive voter laws, such as mandated voter ID regulations, or limits to voter registration. A study done for the Journal of Politics, and examined by the Washington Post shows a statistically significant “drop in minority participation when and where these [stricter voter registration and ID] laws were implemented. Hispanics are affected the most… Strict ID laws mean lower African American, Asian American and multiracial American turnout as well. White turnout is largely unaffected.” These findings show that the greater the restriction on voting rights, the greater the racial imbalance in access to voting becomes.

Another tactic being used to suppress voting rights is the addition of a citizenship question on the 2020 census. The Administration claims inclusion of a citizenship question is intended to help with enforcement of the Voting Rights Act. It’s easy to see right through that façade. The addition of this question will undeniably result in an inaccurate count of areas with immigrants and minorities. As the census is one of the key tools in determining allocation of federal funds as well as congressional representation this new kind of gerrymandering serves as another tool of suppression targeting the rights of people of color, the youth and the poor.

The UCC General Synod has long supported voting rights and addressing obstacles to participation in the electoral process within the broader context of the civil rights struggle. The United Church of Christ’s General Synod decisively adopted a statement calling on the church to publicly support voter’s rights through public statements, advocacy and actions.

In order to be a functioning and true democracy the right of the people to vote in elections is tantamount. Each time a law is enacted to suppress the rights of people to vote, it chips away bit by bit the foundation of our claim of a free and fair nation. It’s important to listen for the myths and misinformation about voting and voting laws, for example, the myth that voter fraud is a widespread problem. The facts show it is not. Often the rights of people are secreted away by laws that claim to do one thing, but really do another. We need to be continually vigilant against the ongoing wave of voter suppression.

Join with the Poor Peoples Campaign to demand the right of everyone to vote is upheld. This means restoration and expansion of the Voting Rights Act and implementation of practices that make voting accessible to everyone as well as eliminating many of the state and federal voting practices that are racist and xenophobic. Join with us to call on our leaders to not just celebrate democracy, but actively work to make our nation a true democracy.

This week, the US Department of Justice is expected to rule on litigation against Safehouse,...