Saying the names of Black people slain by police and vigilantes, more than 100 United Church of Christ youth, young adults and youth ministers began a conversation online July 28 about how to dismantle racism.

“We are here as a first step in determining what we individually and collectively can do to heal the brokenness of our community and call out the ideology and belief of white supremacy, so that our Black and brown children can grow up and live out their God-given purposes and potential,” said the Rev. Trayce Potter, minister for youth and young adult engagement, at the start of “No Justice No Peace” – the first of a two-part UCC virtual youth rally.

Offered live on Zoom and simulcast via YouTube, the event was a special edition of the UCC’s “Tuesdays for Nurture” webinar series. It was recorded and can be viewed on the UCC YouTube channel, here (or click on the image at right). Part II, “White Silence is Violence,” will be at 3:30 p.m. EDT Thursday, July 30. Free registration is available here.

Sharing personal stories and views, a July 28 panel of people of color from inside and outside the UCC discussed the physical as well as emotional harm caused by white racism, the faith basis for fighting it, the power of young people to make change and the importance of seeing and being seen.

Deaths, and resistance, defining a generation

Early in the webinar, the names of 23 slain Black people appeared on the screen, each preceded by a hashtag. Potter invited participants, wherever they were, to say them aloud. She said today’s young people will remember where they were when they learned of many of these deaths or the acquittals of their killers – much as older generations can remember where they were at the moments of the assassination of the Rev. Martin Luther King Jr., a moon landing, the beating of Rodney King in Los Angeles, the Columbine High School shooting or the destruction of New York City’s World Trade Center.

“In the eight years since Trayvon Martin was shot and killed, there have been too many high-profile murder cases to count, and I’m certain there are many more that go unreported because no one was there with a camera phone,” Potter said.

Haley Hudler, a student at UCC-related Chicago Theological Seminary, connected the killings to racist narratives that date back to the beginnings of U.S. history and have never gone away. “Since the Civil Rights movement of the ‘60s, the majority white narrative has attempted to solve the issue of racism by twisting the famous words of Martin Luther King’s ‘I Have a Dream’ speech,” she said. Using that speech as a false basis for an “I don’t see color” ideology is a problem “because it excuses white people from acknowledging their racial biases,” she said.

Hudler also noted that racism is “not just a black and white issue,” naming discrimination against people of Asian, Pacific Islander, South Asian, Middle Eastern, Latinx and Indigenous descent – and discussing the pressure she felt, as a child adopted from China, to fit in to the predominant white culture around her.

Racism as a daily experience

Panelists echoed that introduction as they confirmed, from experience, that racism is real for young people, both inside and outside the church.

UCC Council for Youth and Young Adult Ministries member Michaela Flanders of South Hadley, Mass., said role models who share her Asian culture are not easy to find. “Last year was the first time I had seen a Chinese woman in the pulpit,” she said. “It affects you while you are growing up and trying to fit into a white model.”

Cleveland actor and transgender activist Darius Stubbs described racism as a daily experience during his childhood in Youngstown, Ohio. An example was being singled out as the only Black student in a 5th-grade classroom where a story with “the N-word” was being read aloud. Each time it occurred, the teacher would look directly at him and say, “I’m so sorry.” Stubbs said it was “as if I were the only person that this word would affect.” “There was also this sheen of well-meaningness on top of her racism that I don’t even know if she was aware was there,” he said.

The Rev. Kim Kendrick, chaplain at UCC-related Bethany Children’s Home in Womelsdorf, Pa., spoke of the life experiences of young residents and “the negativity that manifests itself when you’re constantly fed a narrative that you are wrong,” based on race, background or other factors. “We know it’s false narrative, but so many of our youth that I’m blessed to walk this journey with – they ingest it, and digest this narrative of negativity.” She said that she and colleagues work hard to change that narrative but “it is sometimes a daunting task to provide hope to our young people.”

Power of ‘I can’t breathe’

Society’s newfound awareness of systemic violence against Black people can have negative as well as positive aspects, panelists said. Potter asked them to reflect on “I can’t breathe,” the words spoken by George Floyd and Eric Garner as they were dying at the hands of police officers.

Ifeoma Emeh, a young-adult member of St. Albans Congregational UCC, Queens, N.Y., said turning “I can’t breathe” into a protest cry is African Americans’ way of “taking a stand against centuries’ worth of our being marginalized.” She called it “a representation of the blatant disregard for Black lives and the systematic chokeholds that authorities have attempted to hold us hostage politically with,” ranging from redlining to voter suppression.

Cleveland City Council member Basheer Jones agreed. “‘I can’t breathe’ represents not just the physical knee in the neck of George Floyd, but the spiritual, economic, cultural knee that America for 400 years has had on the spiritual neck of black and brown people.”

“There’s also that element to ‘I can’t breathe’ that is just, ‘I can’t exist,’” Flanders said. “Like, I can’t live in safety. … I’m living in a society in which my existence is criminalized.”

The slogan also has a downside, Flanders said. “I’m not entirely sure how I feel about this motto because there are a lot of people on social media who, at this point, are just using it as a hashtag … just people trying to tokenize and look like allies online.”

Social media, while a vehicle for videos showing the truth of police brutality, can also turn into a “viral sharing of pain” and an “unending sludge of death,” Stubbs said. He remembered feeling “out of my mind with grief and confusion” when he heard that the police officers involved in the death of 12-year-old Clevelander Tamir Rice had been acquitted. “Whenever another Black person becomes a hashtag, whenever another Black trans person becomes a hashtag, this is the feeling that gets brought up for me – this feeling of being sick at heart, at knowing that this is the way that our justice system works.”

Faith calls for ‘an uprising’

In Zoom’s chat feature, a UCC minister from Atlanta wondered, “What specific, tangible things can UCC ministers put into practice to engage youth – middle school to high school – in dismantling white supremacy?” And while the webinar didn’t get that specific – Potter said these webinars were a start in planning youth anti-racism strategies – panelists did suggest possible directions.

She also challenged the church itself. “Center the voices that are not always heard, and not in a token way,” Kendrick said. Addressing UCC congregations, associations and conferences, she said, “Please don’t undertake a search and call for a Black, Indigenous, person of color just so the church website and your Facebook page can now call itself diverse and inclusive.” A better idea, she said, is to “make sure that our congregations have dialogue, get educated about racism, to actually say the words, ‘white supremacy.’ To learn.”

Hudler mentioned how much she had benefited from communal participation in the UCC Sacred Conversations to End Racism program.

In the wider community, Jones said marginalized neighborhoods need “three B’s”: economic development (“bucks”), an educational system that is honest about racism in American history (“books”), and voting rights, plus candidates worth voting for (“ballots”). 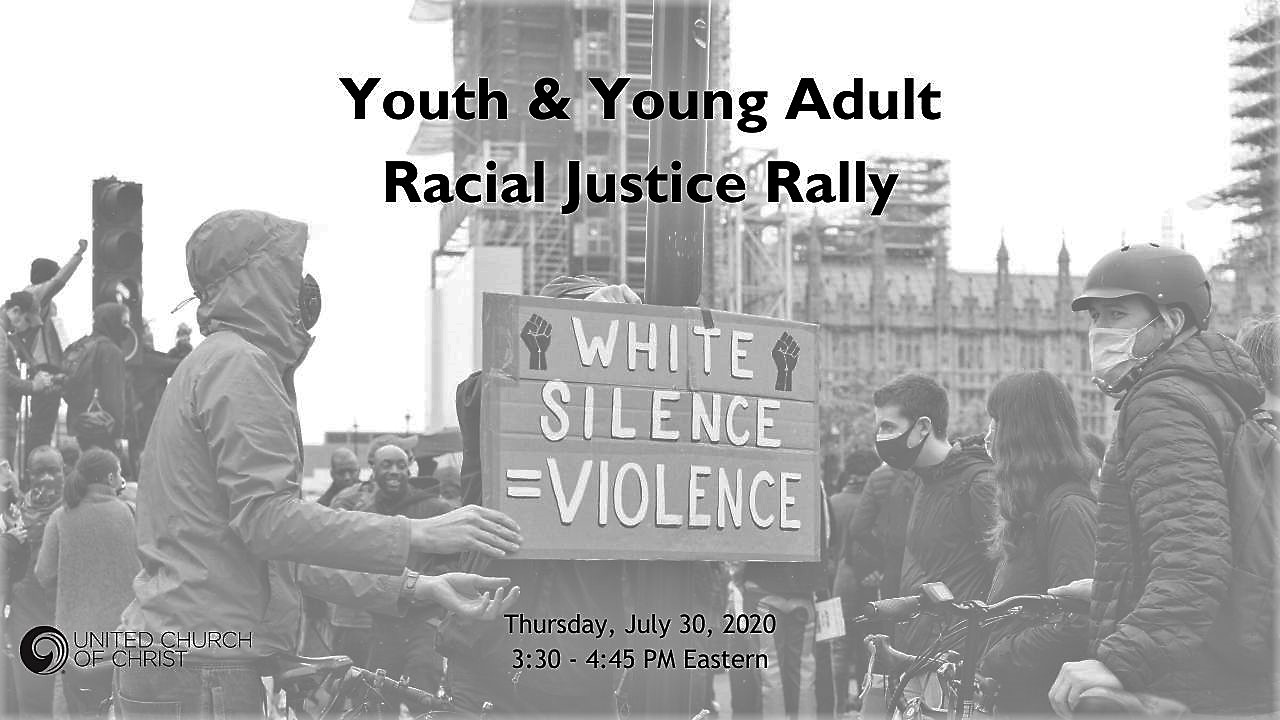 Storyteller Valerie Tutson illustrated the power of youth with a story from history. She told of teenager Maritcha Lyons, whose proactive work in 1865 – including a speech at the Rhode Island statehouse – caused that state’s schools to be desegregated.

The webinars are “a starting place for future engagement and leadership development opportunities,” said the Rev. Chris Davies, who heads the UCC’s Faith, Education, Innovation and Formation Team and is coordinating Part II along with Potter, who will host it. It will focus on white people’s responsibility – though, as with Part I, people of all identities are encouraged to attend.

Hudler encouraged participants: “Fight the good fight, and know we are all in this together, fighting for what’s right – liberation for all.”