Jesus was a Low-wage Worker

You shall not withhold the wages of poor and needy laborers, whether other Israelites or aliens who reside in your land in one of your towns.         --Deuteronomy 24:14

Jesus was a low-wage worker, just like too many workers in the U.S. today. Nurses aides, hotel house-keepers, farm workers, day laborers, early childcare specialists, fast food workers, retail sales clerks, and custodians are examples of workers who provide needed services but who usually receive wages so low that they cannot keep a family out of poverty. Jobs should lift workers out of poverty, not keep them there. We sometimes justify poverty wages by assuming certain workers are not worth more, are not worthy of living wages. But all workers are people of God, made in God’s image. Jesus was a low-wage worker. Low-wage workers today, just like Jesus, deserve a living wage.

Too many low-wage jobs -- Over one-quarter of all jobs in the U.S. (28%) pay poverty-level wages, so low that a full-time worker cannot keep a family of four out of poverty. These jobs are more likely to be held by women and people of color, marginal jobs for -- too often -- marginalized people. Just like Jesus. The table shows the workes who hold these jobs, based on sex and race/ethnicity. For example, 39% of African American women hold poverty-wage jobs. Hispanics are most likely to be paid poverty wages followed by African Americans. 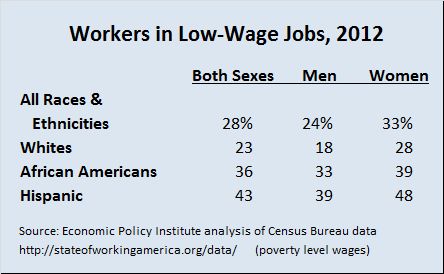 Less upward mobility -- These jobs are seldom ladders to better opportunities. Today, moving up the ladder – for example, moving from low-income or working class up to middle income – is harder (and achieved less often) than in the past.

Education is not the answer -- While more education can improve the job prospects for an individual, allowing him or her to move to a better paying opportunity, more education for workers will not improve low-wage jobs.  Even if everyone had a college degree, we would still need people to sweep floors, sell clothes, cook burgers, and care for our children and elders. These jobs would still be poverty-wage jobs. The only way to improve a poverty-wage job is to raise the pay. The "problem" is not the worker but the job.

Unsafe work conditions -- Low-wage jobs are more likely to be dangerous or unsafe. Each year more than one out of every four meat-packing workers in the U.S. suffers an injury or work-related illness that requires medical attention beyond first aid. One out of every seven poultry processing workers is injured or becomes ill due to their job each year.

What to Do about Poverty-Wage Jobs

Workers need jobs. If all they can find is a poverty job, they have to take it. But workers acting together with their allies can improve their workplaces and gain dignity on the job. Find worker organizations in your community to support. Poverty jobs can be changed into life-enhancing, living-wage jobs if we actively work to make this happen.

Strengthen workers' right to organize or form a union -- We need to strengthen the right of all workers to form and join unions. Unions are one of the best ways for workers to improve their wages and working conditions. We are indebted to union struggles of the past for many of the workplace benefits and social supports that we take for granted today including the 8-hour day, paid vacations and holidays, health insurance, and pensions.

The right to organize a union is a basic human right, included in the United Nations Universal Declaration of Human Rights. But this right has been eroded in the U.S. In 31% of all efforts to form unions, workers are illegally fired solely for their union organizing efforts. All together, 10% of workers who try to form a union are illegally fired. In addition, employers too often engage in coercive tactics that interfere with workers’ rights to freely choose union representation. Legislation is needed to strengthen the right to organize and increase penalties for firms that violate this right. More info.

Change Unfair International "Free Trade" Agreements -- Laws that govern international trade and investment typically put workers – in the U.S. and around the world – at a disadvantage. Free trade and investment agreements usually mean freedom for corporations to move where wages are lowest, workers are least able to speak out, and safeguards for both workers and the environment are weakest. This hurts workers in the U.S. and other countries. These agreements provide an undemocratic way for corporations to gain power and reverse hard-won regulations that protect consumers, the environment, and workers; bolster food safety; provide access to affordable medications; and regulate financial institutions. There is a growing international movement to oppose these treaties. Read about the Trans-Pacific Partnership, a "free trade" agreement currently being negotiated among 12 Pacific-rim nations. Support and buy sweat-shop free apparel and other goods, and fairly-traded coffee, cocoa, and other products. Serve fair trade coffee at your church. Learn about the UCC’s Coffee Project.

Stop Wage Theft – Unfortunately it is quite common for employers to steal wages from workers, that is, to fail to pay employees all they earn. Up to two-thirds of workers in low-wage industries are victims of wage theft each week. Failure to pay for all hours worked or for overtime are just some examples of the ways employers steal wages. Work to end wage theft in your community. Learn more.

Low-wage workers are high-value people, created in the image of God. All jobs must provide fair wages, benefits, and working conditions. All workers (all people!) must be able to support themselves and their families, and live with dignity the life of wholeness that God intends for all. God’s reign does not stop at the door to the workplace but extends to all aspects of life including our work lives.