In a world becoming increasingly globalized, more people are leaving their homelands to seek better lives and opportunities in new countries. Their reasons for leaving are diverse and complex: economic necessity, war, or persecution. The U.S. has long been a nation of immigrants and we have consistently been conflicted about this. We gratefully welcome immigrants and their contributions, and we exclude them, discriminate against them and, at times, inflict grave harm upon them.

As Christians, we are called to love our neighbors. The Bible is unambiguous in calling us to welcome aliens and strangers in our land, and to love them as we love ourselves. In these times, let us listen to the voice of the still-speaking God. We will learn how to respond to these new sisters and brothers residing among us.

Week of Faithful Witness at the Border United Church of Christ churches, clergy and congregants are reaching out with hope and in faith to migrants at our borders and immigrants across the country. Many more are asking what they can do to respond to the government policies that detain and separate families. The Southwest Conference UCC, acting with Justice and Local Church Ministries, has issued two calls to action, one for a faithful witness AT the border, in Arizona at United States border with Mexico August 26-30, and another for a faithful witness FOR the border this fall, in cities and towns across America.

Faithful Witness AT the Border

The Southwest Conference is calling for a week of Faithful Witness at the Border, August 26 – 30, 2018 that will include:

Faithful Witness FOR the Border

We also call congregations and conferences to host their own local Faithful Witness for the Border events that might include:

Please share with the SWC how your congregation/association/conference is hosting local Faithful Witness for the Border events. 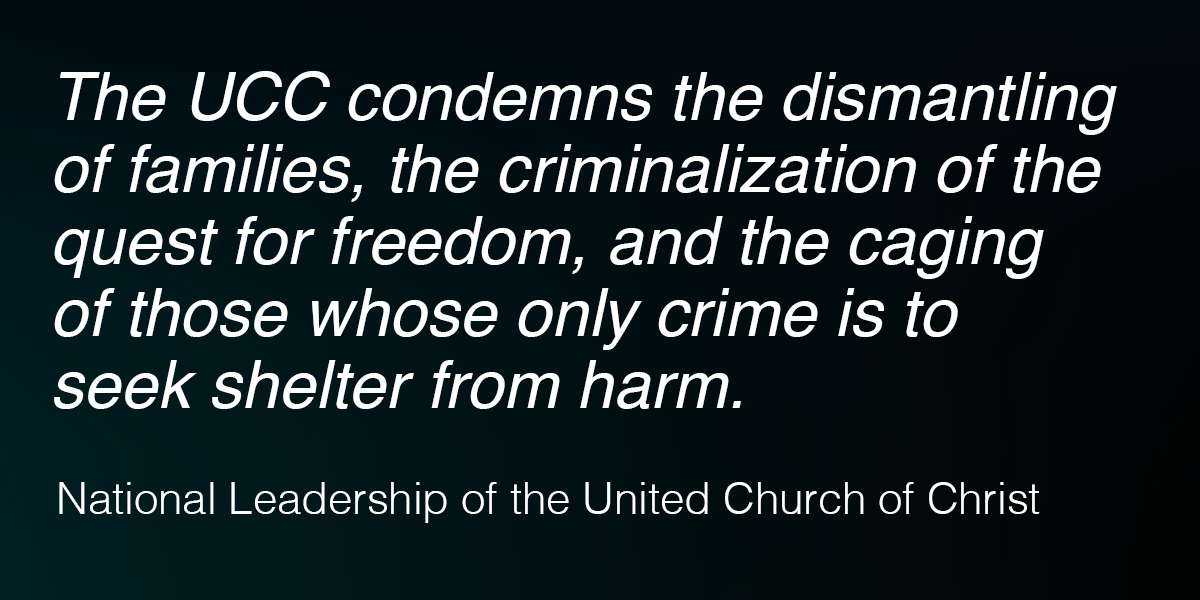 The Administration continues to take significant and dangerous steps that are eroding the foundations of the immigration system and the international law that upholds access to asylum for those fleeing danger and violence. These practices of separating families, increasing immigrant detention, and redefining access to asylum are abhorrent and undermine our values. The Administration recently issued updated policies routinely separating children from their parents. In the past three months more than 2,200 children were forcibly and cruelly taken from their parents. This dehumanizing process puts children at risk and sets our country up to willingly participate in human rights violations on a mass scale. The Executive Order signed by Mr. Trump does not alleviate the problem. The Administration has no plan for reuniting separated families and the zero-tolerance policy remains firmly in place, meaning as more parents are deported more families will be broken apart.

United Church of Christ emphatically affirmed an Immigrant Welcoming Church
Underscoring the love of neighbor, with several speakers proclaiming that no human is illegal, delegates to General Synod 2017 overwhelmingly declared itself an Immigrant Welcoming Denomination in July of 2017 and called on all settings of the United Church of Christ to do the same.

'Love will triumph someday' – California pastor opens up about immigrating to U.S.
July 03, 2018
The Rev. Rhina Ramos knows all too well the fear and the struggle facing migrants coming to the United States, hanging on to the hope of building a better life. She lived it.

At DC immigration rally, Traci Blackmon calls on people of faith to live by moral law of love
July 02, 2018
The Rev. Traci Blackmon brought greetings from the UCC to 30,000 people gathered at Lafayette Square across from the White House, site of the "Families Belong Together" rally in Washington, D.C. on June 30, urging them to keep fighting for love.

Voices at DC immigration rally speak up, speak out against family separations
July 02, 2018
People across America, young and old, lifted up their voices at more than 700 'Families Belong Together' rallies on June 30, calling for change in the government immigration policies, and the immediate reunion of migrant families separated at the border.

Heeding the sacred call to give sanctuary to the vulnerable
By Rev. Traci Blackmon and Rabbi Jonah Dov Pesner | April 18, 2018
(RNS) — Our immigration enforcement agencies are becoming agents of family separation. Read more.

Building Sanctuary For All... All of Us

"Shouldn’t our sanctuaries offer this same kind of Sanctuary...to anyone? Wouldn’t we want this grace, and do we not call upon this kind of love every Sunday?" Read more of Rev. Julian DeShazier's reflection on Immigrants Rights Sunday and intersectionality.

Sanctuary Rising
The resurgence of the Sanctuary Movement works to provide protection in our houses of worship for those facing violence, discrimination, and deportation. We organize as people of faith and moral courage accompanying the most marginalized among us targeted by President-elect Trump's hateful rhetoric and policy proposals. We lift up the prophetic and moral witness of communities of faith against the unjust systems of power and privilege that keep our communities from living with the safety and dignity they deserve as human beings.

Now, more than ever faith communities from different traditions are coming together to take a bold and prophetic stand against  President-elect Trump's harsh immigration proposals and threats to end Deferred Action for Childhood Arrival. 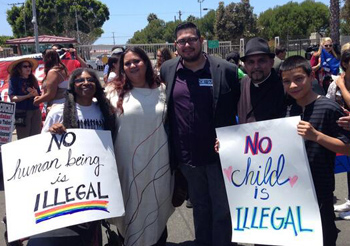 Raids Rapid Response: Toolkit for Faith Allies
"As faith allies, we are called to be in solidarity through rapid response mobilization to stop these raids, stop these deportations and support impacted communities. In the face of President Trump's extremist anti-immigrant agenda we must respond with a prophetic and bold voice." ​Download the toolkit via SanctuaryNotDeportation.org.

UCC advocates put 'bodies on the line' at border wall with Mexico
The push for humane immigration reform brought veterans, clergy, activists and UCC advocates to the border wall dividing the Nogales, Arizona, and Mexico communities, as part of a joint rally calling for a new model of border justice that builds bridges and relationships instead of walls and policies that create fear and division. (Read more.)

115 UCC Leaders Send Letter to Congress
The United Church of Christ works to offer an extravagant welcome to all of God’s children regardless of their national origin or citizenship status. Many of our congregations are working to become Immigrant Welcoming Congregations because we understand we have a moral imperative to welcome the most vulnerable in our midst. Together 115 UCC leaders sent a letter to Congress, urging all members to speak out in support of deferred action for families and pursue commonsense immigration reform; asking them to tell the Administration to stop the raids and end Operation Border Guardian;and calling on them to respect current U.S. asylum law, honor existing protections for victims of human trafficking, and expand legal assistance. Read the letter.

Blood on our hands: Stop the raids - The Hill
By Rev. John C. Dorhauer, General Minister and President of the United Church of Christ
Over the last several months, discussions around immigration policies have devolved to extremist sound bytes, with political candidates creating a new wave of anti-immigrant rhetoric to further their own agendas. Sadly, these hateful words have manifested themselves in how the United States treats immigrants. The actions of the U.S. Department of Homeland Security (DHS) are endangering the lives of thousands of asylum seekers fleeing violence, persecution, and devastating poverty in Central America. (Read more.)

UCC Supports Sanctuary Cases to Stop Deportations
In Tucson and Tempe Arizona United Church Congregations Good Shepherd UCC, First Congregational of Phoenix and Shadow Rock United Church of Christ have all offered letters of support to help immigrants facing deportations to stay with their families. Southside Presbyterian Church in Tucson has offered Rosa Robles Loreto Sanctuary allowing her to live at the church for proection from immigration authorities while she seeks to win deferred action to stop her deportation order. You can stand with Rosa by signing the Groundswell petition here. Earlier this summer, Shadow Rock UCC had offered Sanctuary to Marco Tulio which helped him win an order of supervision to stay with his family.

Love Has No Borders - Essays and stories of how faith leaders resisted Alabama's Anti-Immigrant Law edited by UCC Pastor Rev. Angie Wright. Get your copy here.

No Longer Strangers: The Practice of Radical Hospitality, a book by UCC pastor Rev. Wendy J. Taylor, explores the lonely and difficult lives of migrant farm workers in Northern California and follows one woman’s compassionate response to their plight.

Behind the Wall
Video by Rev. Art Cribbs. Made possible through a grant by Neighbors in Need.

We are America Stories - stories of immigrants

Deportation 101
A Community Resource on Anti-Deportation Education and Organizing  - revised May 2010 is a curriculum prepared by the Detention Watch Network, Families for Freedom, the Immigrant Defense Project of the National Lawyers Guild.

Understanding the DREAM Act
The education of immigrant children is not only a smart investment; as an expression of the call to love our neighbors ad ourselves, it is also a moral imperative.  The issues of immigration and immigration enforcement affect the children in immigrant families and the public schools that serve those children.