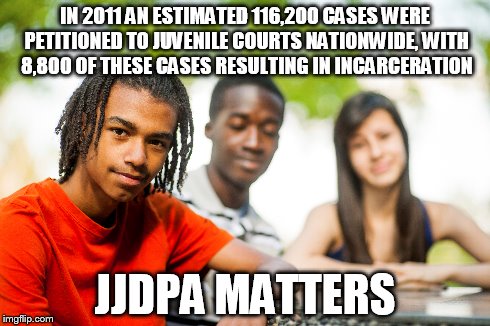 Juveniles can be tried as adults in all 50 states, and are vulnerable to adult punishments.  They may also be remanded to adult prisons.

The U.N. Convention on the Rights of the Child states that crimes committed by a juvenile should not result in execution or life in prison without parole.  In 2005, the U.S. Supreme Court ruled that it is unconstitutional to execute people for crimes they committed as children.  As a consequence, a number of young people were released from death row into the general prison population.  Five other countries execute people for juvenile offenses: Iran, Yemen, Nigeria, Saudi Arabia, and Pakistan.

The Twenty-Third General Synod stated, "We affirm the right of juveniles to an equitable system of justice that respects the life and promise of our youth."

The United States has more than 60,000 children sitting in jail, lost in a broken system that has led our country to incarcerate more children than any other nation. Why are we turning our backs on the youngest, most vulnerable members of society, locking up 2 out of 3 of those who are convicted of nonviolent offenses? Why are 80 percent of children who are imprisoned black or Hispanic? And why are we punishing these children so harshly, dooming some of them to solitary confinement, where they are left torturously alone, causing severe physical and psychological harm?  Voices from all points of the political spectrum, including the faith community are calling for answers and solutions to these and many other issues.  They are speaking out and raising awareness for criminal justice and youth justice reform.

The Campaign for Youth Justice (CFYJ) is a national initiative committed to seeking solutions for these troubling questions.  It is focused entirely on ending the practice of prosecuting, sentencing, and incarcerating youth under the age of 18 in the adult criminal justice system.

Annually, the Campaign sponsors National Youth Justice Awareness Month (YJAM) which aims to provide people across the country an opportunity to develop action-oriented events in their communities during the month of October.  Individuals, communities and organizations can advocate for better juvenile justice policies by elevating the importance of issues such as determining the age that juveniles are classified as adults, housing juveniles with adult offenders, and isolation in solitary confinement.   This year President Barack Obama has signed a proclamation observing October as National Youth Justice Awareness Month. Read the President’s Proclamation.

One way that your local congregation can be involved this year is to partner with organizations to get local governments or state Governors to pass resolutions declaring that October is Youth Justice Awareness Month.

Recently, Judiciary Committee Chairman Chuck Grassley (R-IA) and Senator Sheldon Whitehouse (D-RI) introduced legislation, S.1169, to reauthorize the Juvenile Justice and Delinquency Prevention Act, which was created in 1974 and has not been updated since 2002.

The legislation would make improvements to the law, including:

The JJDPA is the only federal law that sets national standards for the treatment of youth involved in juvenile justice systems. In the 40 years since it was first enacted into law, the JJDPA has enabled significant improvements to juvenile justice, including reducing youth crime rates and supporting many states in creating fairer approaches that help youth stay connected to their communities and get back on track.

In 2001 the 23rd General Synod of the United Church of Christ affirmed advocacy for fair and appropriate treatment of youth, especially as they are involved with or at risk for involvement in the criminal justice system.

Resources on the JJDPA & the New Senate Bill