Community organizing has long been recognized as an effective way to improve lives and bring justice to places where it is lacking.  For churches, community organizing offers a tangible means for being disciples engaged in the public square while strengthening their congregational life and mission.

Numerous UCC congregations around the country are members of local CBCO efforts. These ecumenical or interfaith networks of congregations work to address the needs and injustices present in their communities. Pastors report that participation in CBCO can be a transforming experience for congregations, individuals, and communities. Congregations gain new vitality and, often, new members.

According to research, participation in CBCO:

The collective impact of CBCO efforts is a powerful reshaping of communities and wider society, according to the Building Bridges, Building Power report published in 2012.   The study found that currently, organizations comprising institution-based community organizing in the U.S. include “approximately 3500 congregations and 1000 public schools, labor unions, neighborhoods associations, faith –based organizations and others (and) collectively represent over 5 million Americans.”  Community organizing, according to the report, “has the organizational capacity to make a powerful impact on democratic life, especially if best practices spread across the field.”

CBCO is a natural fit for UCC congregations given our strong commitment to justice as well as to ecumenism and interfaith work. While many UCC congregations are already engaged in CBCO, countless others would benefit from participation in this method of developing leaders and building congregations while simultaneously increasing the presence and power of our values in the public square. 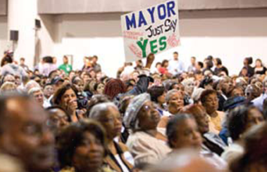 There are four larger CBCO networks and two smaller ones that support local interfaith or ecumenical coalitions across the country. The networks provide training opportunities for congregations and organizers, and facilitate work among the local coalitions. There are many valuable resources on their web pages.

Direct Action and Research Training Center (DART) : 20 organizations in six states, primarily in the Midwest and FL, based in Miami.

Gamaliel Foundation : 60 affiliates in 21 states, based in Chicago, IL. (Barack Obama worked as a community organizer with this group)

Industrial Areas Foundation (IAF): 57 affiliates in 21 states, based in Chicago.

Intervalley Project : 7 affiliates in New England, based in Newton, Mass.

Other Resources on CBCO

The Unitarian Universalist Association has an excellent webpage on CBCO with many good resources.

In Praise of Faith-Based Community Organizing by Heidi J. Swarts in Shelterforce, Fall 2008, the journal of the National Housing Institute (“The journal of affordable housing and community building”)