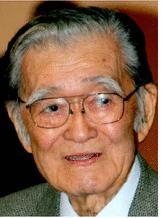 Some time ago, the Rev. M. Jack Takayanagi embraced the belief that unless he served Christians of all races, he was not following the teachings of Jesus Christ.

Takayanagi, remembered by colleagues and friends throughout the United Church as a warm, gentle soul and mentor, died on Nov. 4 in Beaverton, Ore., at age 93.

The Rev. M. Linda Jaramillo, former executive minister of UCC Justice and Witness Ministries, shared that “when I was a member in discernment, he was my mentor whom I treasured for his sage advice and always supportive encouragement,” he said. “I am so grateful that I got to hug him one more time at the Ainsworth UCC 30th Anniversary Celebration just a couple of weeks ago.”

Takayanagi was born on June 22, 1922, to Japanese immigrants who came to this country at the beginning of the 20th century, settling in California and finding work as landscape gardeners. Decades later in 1942, after the Japanese attack on Pearl Harbor thrust the United States into World War II, the family, along with 10,000 others, was sent to Manzanar, a Japanese internment camp in the Mojave Desert. Takayanagi obtained an educational release from camp to attend Drake University in Des Moines, Iowa.

Eventually, Takayanagi graduated from Colgate Divinity School and, after his ordination in 1950, went on to pastor Baptist and Congregational churches in New York, as he shaped a ministry of serving people who did not look like him. “I did a good deal of thinking, and I came to believe that I would be defeating the real purposes of Christianity and the teachings of Jesus if I did not serve Christian people regardless of race,” he said.

Jack met his wife, Mary, while they were in high school in California, and she moved with him to Iowa, where they were married on Dec. 26, 1943. They traveled to Scotland, Switzerland, Japan and the Republic of Korea, where Heifer International, a nonprofit organization that seeks to eradicate hunger through economic development, sent Jack in 1976.

“He always understood the importance of intercultural reality,” Jaramillo said.

A celebration of his life is scheduled for Dec. 6 at Ainsworth UCC.