Into the Mystic: The Sacred in You 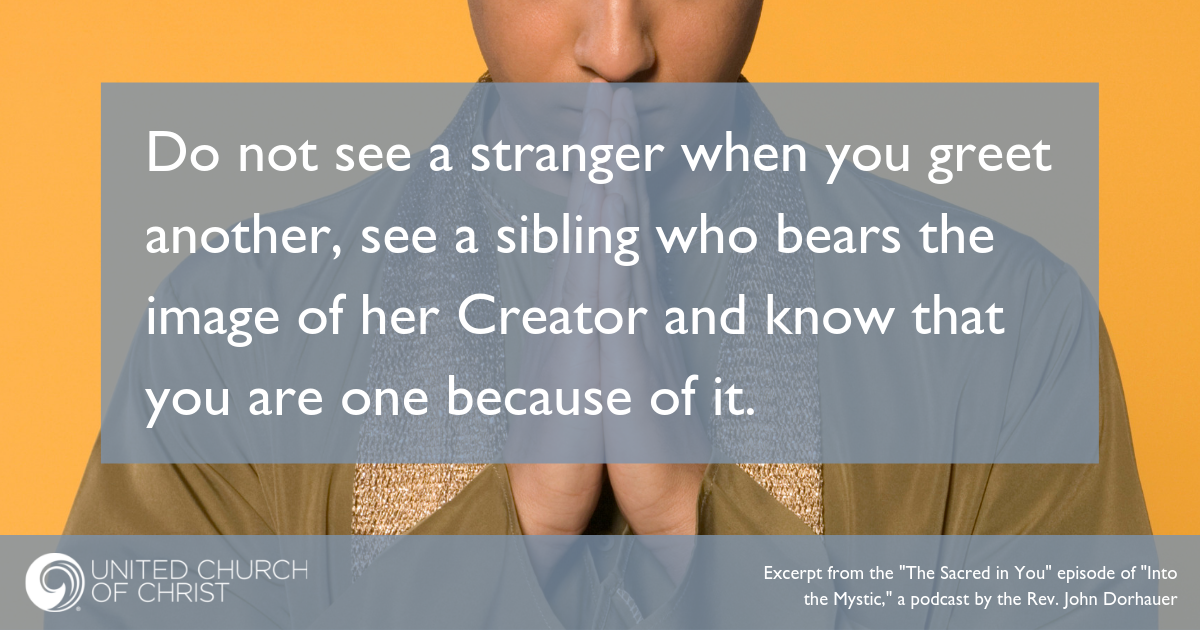 In the Tantric tradition, from which much of yoga derives, there is the practice of greeting the person in front of you with the word “namaste.” It has various translations, but the one I have grown accustomed to is this: “the divine in me greets the divine in you.”

In Western culture, there is a strong emphasis on the self. Phrases like self-sufficiency, self-made man, I did it myself, self reliance, I brought myself up by my bootstraps are not only commonly heard, they reflect an orientation we have towards differentiating ourselves from those around us.

One of the products of living this way is the mindset that is created which allows me, through the act of differentiation, to begin to identify markers that not only distinguish me from my neighbors, but to go attach value to the things that are unique to me.

Once we do that, racism and sexism and ageism and ableism and heterosexism and Americanism and so many others –isms become the norm.

Tantric philosophy, and Eastern religious perspective, begins with a very simple notion: the presence of the divine exists in all of us. There are strong threads of my own Christian tradition that resonate with this. The simple notion, taken from the first chapters of our sacred texts, say essentially the same thing: “I have created them in our image, male and female.” That simple, profound notion – that within the creature is the image and likeness of the Creator – is an entirely synchronous rendering of the notion of Namaste.

The difference between self-reliance and Namaste is not one of belief but of orientation.

You can argue that our Creator made us all unique, each one different in so many ways and therefore taking on an identity that differentiates them from all others. And there is beauty in knowing that.

You can argue that we all bear the image of our Creator, and therefore are all essentially the same.

Both of them are true articulations of what people of faith have believed for millennia, and consistent with traditions that still are practiced widely today.

So this is not a difference of belief, but of orientation.

When we not only focus on the differences, but then attach value to them – we become both separated from and better than many of our neighbors.

I am going to make this notion of seeing the sacred in my neighbor a part of my own spiritual discipline.

I would like to encourage you to do the same.

Do not see a stranger when you greet another, see a sibling who bears the image of her Creator and know that you are one because of it.

We are all growing weary of the random acts of violence that we all know are the caused by perpetrating a narrative of “We are better than.” Therefore, let us all begin to re-orient ourselves toward the other not as stranger-to-be-feared but as neighbor –to-be-met on this, our journey Into the Mystic.