Into the Mystic: For Whom the Bell Tolls 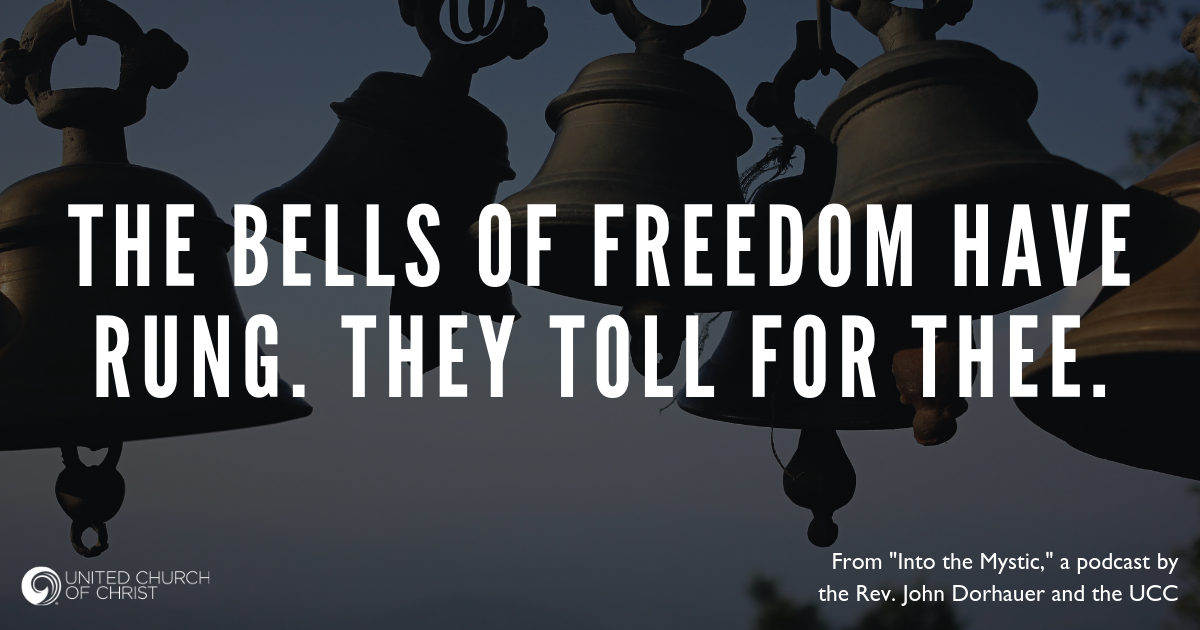 On Sunday, August 25 at 3 pm ET church bells rang out across America.

The tolling of the bells marked the 400th anniversary of the landing of the first kidnapped slaves. They were hauled onto these shores to spend their lives in servitude to white masters. Arriving on the Portuguese ship the San Juan Bautista were 20 Angolans, sold to a white man John Rolfe and the other white colonists in Jamestown VA. In that moment, the marriage between white wealth and white religion in America took shape.

For 400 years, white America has struggled to come to terms with the teachings of a religion that justified the forced enslavement of Africans. While there is much to write about in the telling of the forced enslavement of brown and black  bodies, the piece that Western Christianity must own is the central role it played in giving the theological space necessary for evil to thrive.

There is no question that disciples of the one called Jesus should have never tolerated this utter degradation. The ugly irony is that rather than fight it, white Christians invented the religion that ordained it. We who worship our white Jesus in America today have to come to terms with the remnants and vestiges of that faith – our faith. Whether we believe in slavery or not, whether we consider ourselves racist or not, we practice a religion that descended directly from those who created it to build and maintain their wealth and power by believing God made black and brown bodies to serve white bodies.

The thought process that was needed to give credence to this new religion would later bear the recognizable fruit of its logical consequences:  on the one hand, racism, segregation, Jim Crow, disestablishmentarianism, and Mass Incarceration; on the other, white supremacy, white nationalism, white power, white privilege, white Jesus, white racism.

We have been deceived. We have participated in the perpetuation of a lie. We may  be trying to deconstruct this religion, but it lingers. Built into the DNA of white American Christianity is the justification of evil – and our efforts to purge this are proving insufficient.

There is a pathway through the malaise that white America lives with.  Whites settled for a religion that cannot heal. White Christians by and large practice a particular aberration of Christianity that needed and therefore created a Jesus who told them they were right to force black bodies into slavery, to torture them into submission, to rape the women and claim their children as property. Today, white Christianity in America is coming face to face with an emptiness it wants to be about anything but the grand mistake it made in creating a God who justified slavery.

In his book on the spirituality of slaves told through the lyrics of negro spirituals, Howard Thurman writes this: “The slave undertook the redemption of a religion the master had profaned.”

White America must repent and heal from this sin

There is a need for white America to heal from this sin it has perpetrated, and to let others redeem the Christianity we profaned by our racism.

We are not bystanders in this. It begins with truth, our truth. No lie will feed us, and our lies have piled up now for 400 years. Finding truth won’t be easy – both because we have hidden it well and because we fear it greatly. The reconciliation and equity and justice that many of us pray for cannot come until the truth about our lies have been fully revealed.

The bells of freedom have rung. Whites may ask for whom those bells toll. They toll for thee.

Begin the journey into truth. Find a new freedom in the shedding of the shackles of deceit and injustice and evil you have worn now for 400 years. And may the peace that passeth understanding be known to you on this, your journey Into the Mystic.