“We are in the midst of a revolutionary moment that I never thought I would see in my lifetime,” activist Valarie Kaur told a United Church of Christ audience June 30.

She said “intimate moments” of encounter among diverse people are what help lay the groundwork for the kind of anti-racist activism that is sweeping the world in 2020 – with white people acting not just as allies of the oppressed, but as “accomplices.”

Kaur spoke during a “Tuesdays for Nurture” webinar conversation with the Rev. Traci Blackmon, UCC associate general minister. It was recorded and can be viewed at the UCC YouTube channel, here. Kaur will also deliver the annual Everett C. Parker Lecture in Ethics and Telecommunications Lecture Oct. 15, sponsored by the UCC’s Office of Communication, Inc.

Kaur described images of Black street protestors being joined by people of other races, “flooding the streets together, grieving together, raging together, fighting together.” “That we have never seen,” she said. “And so I think about the intimate moments that had to happen for those white people, willing to put their bodies and their lives at risk for Black people behind them, to get them to that moment of courage … to take on systems of injustice. Because it really is about changing institutions of power in this country. 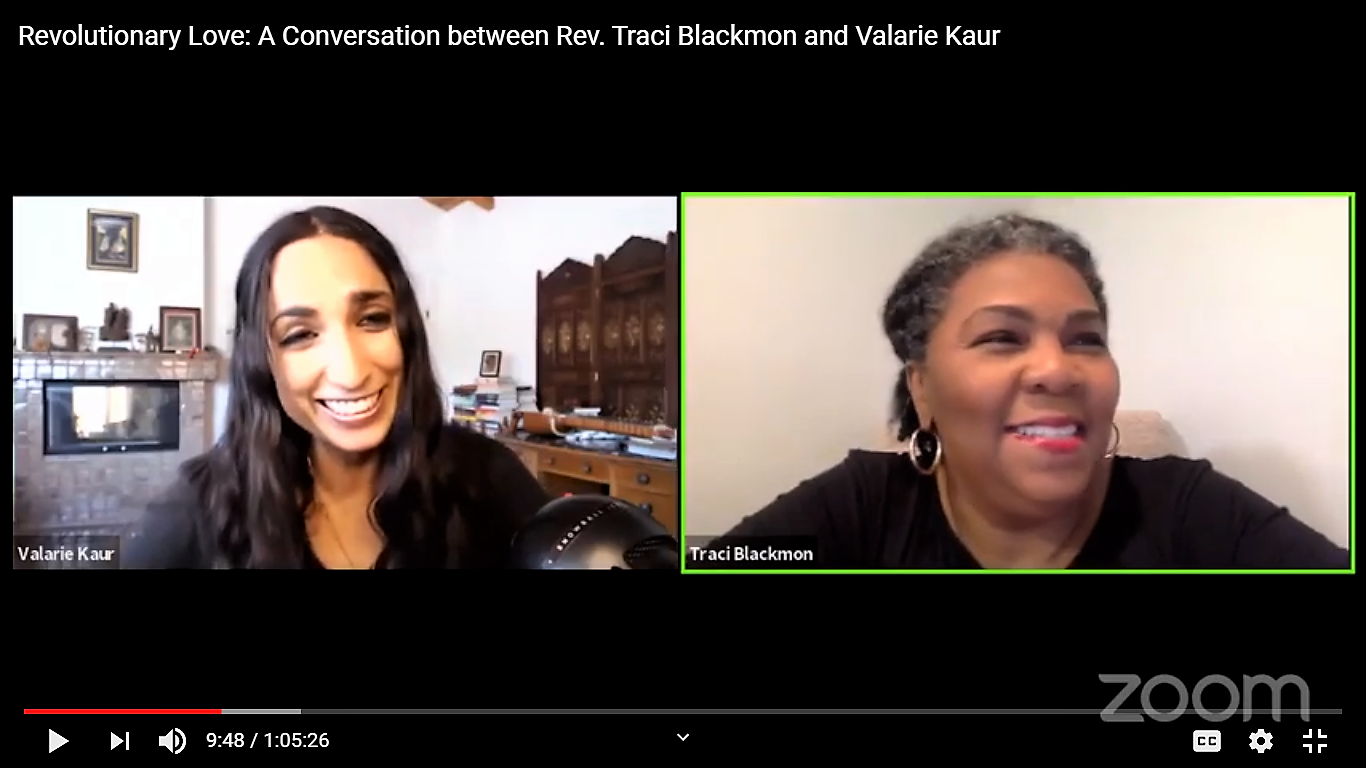 One of those roles, she said, can be to step in when someone doing the difficult work of revolutionary love needs a moment to breathe. Loving one’s opponents is hard work – especially when they’re white supremacists. “There are no such things as monsters in this world,” Kaur said. “There are only human beings who are wounded, who are cut off from their own capacity to love. And if we leave them alone, then they just become more radicalized and more violent and more dangerous.”

But there are moments, she said, when it is not one’s job to focus on that. “If you can think of an opponent right now and you are flushed with rage” – or trauma or pain – “now is not the time to wonder about them. When the police officer is pressing his knee on our neck, it’s not our moment to look up and wonder about him or try to love him. Our revolutionary act is to let others do that labor.

“… If some of us, if white accomplices, can do that work of healing and tending to their wounds – that’s how we’re going to transition this country. So I think revolutionary love is about role literacy, like, what is your role in this moment?”

To be ready to play such roles – to be accomplices and not just allies – many people in dominant cultures must give up “scripts” they’ve learned in their upbringing, Kaur said.

“All of us who are born into dominant positions, whether we’re born into white skin or born into Christian communities, have been given scripts about who we are and how we ought to be, that sever us from our own deeper knowing, our own deeper longing. … How many white people have been given a script that it’s okay to move in a world that is designed to give you benefits, economically, socially, politically, and turn a blind eye to how the Black people and people of color in your life are gasping for breath, either from deadly virus or from state violence? … To release ourselves of the scripts we have been given – that requires bravery. That requires courage. That requires an awakening. I feel like that’s the moment we’re in.”

And while there is joy and excitement in activism – “choosing to let in joy is a revolutionary act,” she said – there are also labor pains.

“Discomfort is the beginning of transformation,” she said. “We live in a culture that teaches us to be afraid of pain.” She encouraged people “to have the courage to sit in our discomfort, to reckon with shame, to reckon with guilt.” “It’s okay to inhabit whatever emotion arises as you’re waking up,” Kaur said. “The key is not to get stuck in it – to move through it, and to find people who will help you breathe and push through the labor of becoming something new on the other side of it.”

That birth metaphor also began the webinar, as Blackmon played a video clip from the time she first met Kaur, at a Moral Mondays Watchnight event in Washington, D.C., on Dec. 31, 2016. The clip shows Kaur concluding a speech at that event. She describes an upsurge in white supremacist activity that was being seen at that moment, including attacks against Sikhs and Muslims – and her hopes for an awakening of resistance.

“The mother in me asks, ‘What if?” she says. “What if this darkness is not the darkness of the tomb but the darkness of the womb? What if our America is not dead, but a country that is waiting to be born? What if the story of America is one long labor? … What if this our nation’s great transition? What does the midwife tell us to do? Breathe, and then push. Because if we don’t push, we will die. If we don’t push, our nation will die. Tonight we will breathe. Tomorrow we will labor, in love, through love – and revolutionary love is the magic we will show our children.”