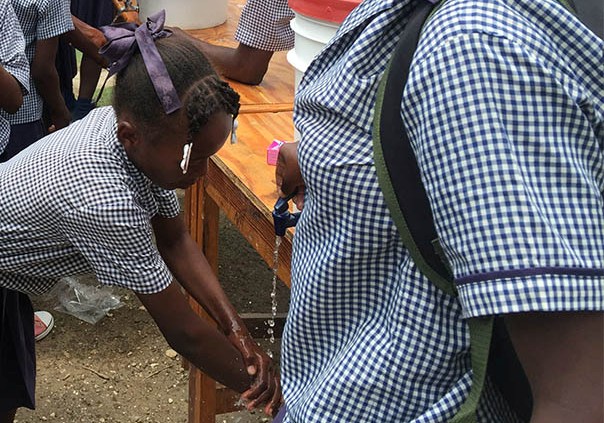 UCC Disaster Ministries has just contributed $10,000 toward a proactive program to prevent cholera and malnutrition in Haiti in the wake of Hurricane Irma, and to treat any instances that occur. The implementing partner is IMA World Health, which has had a significant presence in Haiti since 1998, including relationships with government and communities.

"The UCC is a member of IMA World Health so that we can be part of public health ministries around the world," said Mary Schaller Blaufuss, the UCC's Global Sharing of Resources Team Leader. "Natural disaster is especially difficult for people already vulnerable to diseases and to chronic hunger. You help reach people at the margins in this disaster response with timely assistance."

As one of the strongest North Atlantic storms in recorded history, Hurricane Irma brought driving rain and winds in excess of 155 mph throughout the Caribbean. The Category 5 storm hit the island of Hispaniola, with Haiti's northwest squarely in Irma's trajectory. Haiti's government had been preparing for the storm for a week.

IMA Country Director Dr. Luula Mariano is concerned the country will see cholera outbreaks similar to what followed Hurricane Matthew last year, particularly in the northern regions of Haiti and peri-urban centers across the country.

"Haiti has precious few plains and these are high density areas which are also highly prone to flooding and flash floods," she said. "Any time there is flooding, there is risk for rapid spread of cholera - which can be life-threatening in a developing country like Haiti."

IMA World Health aims to use its diseases surveillance and community-led mobilization experience, and its close relationships with local authorities across every district, to support to early detection and response to suspected cholera cases. Timely treatment and outbreak control education, community mobilization for rapid uptake of cholera vaccination, strengthening of points of care with life-saving drugs and procurement of family hygiene kits are among the urgently needed actions that IMA will undertake.

Here's another factor: Haiti’s northern and central plains are the agricultural core of what is the poorest country in the Western Hemisphere. Both were squarely in Hurricane Irma’s path at the time when the year's second harvest was expected. Acute food shortages and increases in maternal and child malnutrition are expected in the affected regions and beyond.

IMA World Health staff will work with international organizations such as OFDA, the United Nations' World Food Program and its other agencies, IMA member agencies, government and civil society officials to ensure timely local level humanitarian response to mitigate the effects of food insecurity and malnutrition is prevented, or addressed especially in northern Haiti.