I’ve Been to the Mountaintop

On April 3, 1968, at Mason Temple Church of God in Christ, Dr. Martin Luther King, Jr. delivered the last speech of his life. Listening to these prophetic words today, one might easily assume that he smelled death in his purview. In language reminiscent of both an encouraging leader and masterful strategist, Dr. King secures in the hearts and the minds of the listeners the power of the moment. 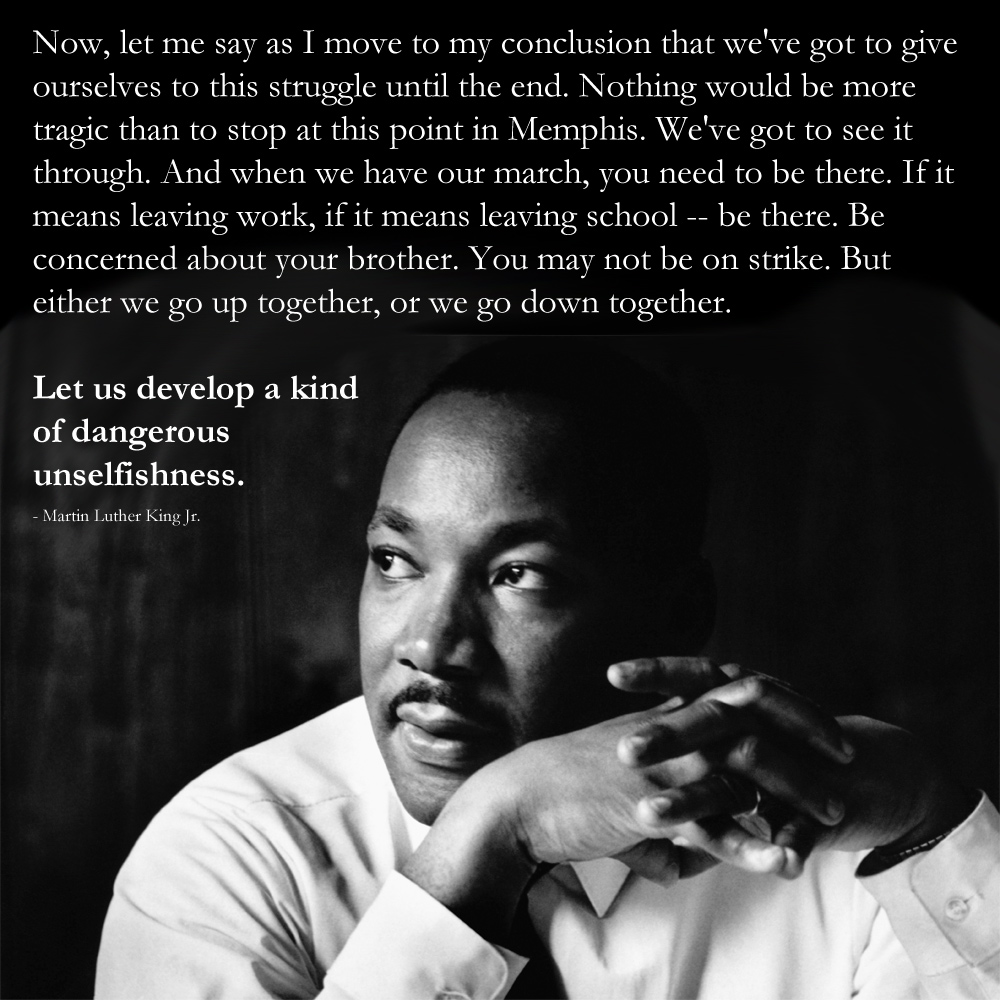 With masterful skillfulness he lays out, like a general before his army, the war plan. He invites the listener to join him as he glides through the roll call of some of the world's most defining moments and then he squarely locates the hopes and dreams of a gathered people who have been beaten and battered in this cue of greatness.

How is Dr. King able to energize those who feel defeated?

How is he able to renew hope in those whose dreams have been deferred?

He does this through spiritual mining. He reaches for the imago dei which resides in each of us, no matter how downtrodden, and transforms the horrors of reality into the hope of victory. This is a pastoral letter, one that provides a much needed example for those of us called to remind the weary that God is indeed on our side.

Excerpt from "I've Been to the Mountaintop"

Now the other thing we'll have to do is this: Always anchor our external direct action with the power of economic withdrawal. Now, we are poor people. Individually, we are poor when you compare us with white society in America. We are poor. Never stop and forget that collectively—that means all of us together—collectively we are richer than all the nations in the world, with the exception of nine. Did you ever think about that?.... That's power right there, if we know how to pool it.

We don't have to argue with anybody. We don't have to curse and go around acting bad with our words. We don't need any bricks and bottles. We don't need any Molotov cocktails. We just need to go around to these stores, and to these massive industries in our country, and say, "God sent us by here, to say to you that you're not treating his children right. And we've come by here to ask you to make the first item on your agenda fair treatment, where God's children are concerned. Now, if you are not prepared to do that, we do have an agenda that we must follow. And our agenda calls for withdrawing economic support from you."

And so, as a result of this, we are asking you tonight, to go out and tell your neighbors not to buy Coca-Cola in Memphis. Go by and tell them not to buy Sealtest milk. Tell them not to buy -- what is the other bread? -- Wonder Bread. And what is the other bread company, Jesse? Tell them not to buy Hart's bread. As Jesse Jackson has said, up to now, only the garbage men have been feeling pain; now we must kind of redistribute the pain. We are choosing these companies because they haven't been fair in their hiring policies; and we are choosing them because they can begin the process of saying they are going to support the needs and the rights of these men who are on strike.

Well, I don't know what will happen now. We've got some difficult days ahead. But it really doesn't matter with me now, because I've been to the mountaintop.

And I don't mind.

Like anybody, I would like to live a long life. Longevity has its place. But I'm not concerned about that now. I just want to do God's will. And He's allowed me to go up to the mountain. And I've looked over. And I've seen the Promised Land. I may not get there with you. But I want you to know tonight, that we, as a people, will get to the promised land!

Delivered April 3, 1968 at Mason Temple in Memphis, Tennessee. Read or listen to the speech.

Rev. Traci Blackmon is the Executive Minister for Justice and Witness Ministries of the United Church of Christ.