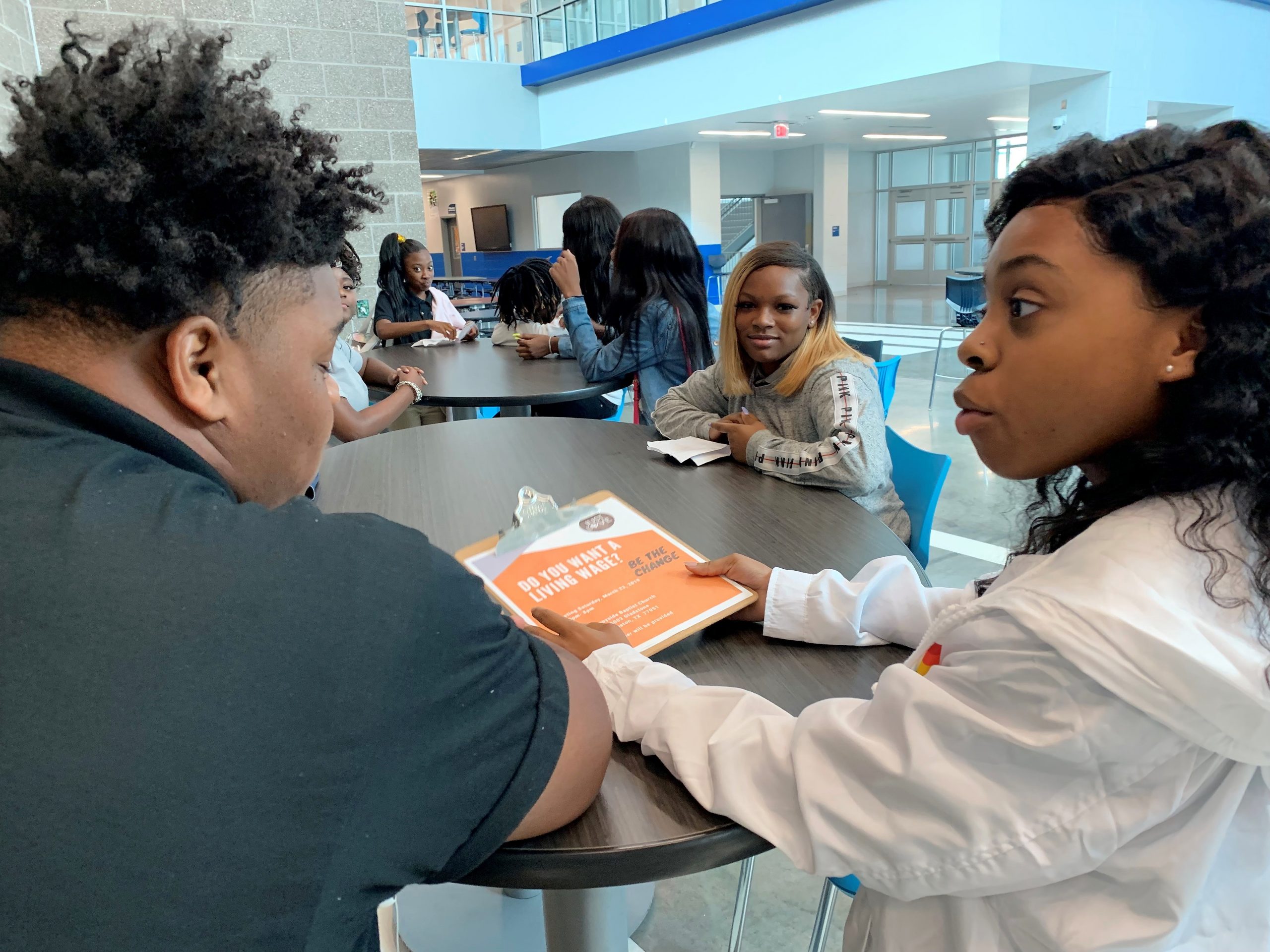 With a background in community organizing, Fennell knows people don’t have to sit still for economic injustice. He knows the wider UCC feels the same, as seen in statements such as a 2017 General Synod resolution, “A More Just Economy: $15 Minimum Wage, Living Wages and Job Creation.” So he sought the NIN grant to introduce young people to local activists in the national Fight for $15 wage campaign and involve them in learning by doing.

‘An active stance, not a passive stance’

The participants were high school juniors and seniors in Just Love’s Young Change Makers program, all from Houston’s Third Ward and vicinity. Already, in the program’s first two years, they had studied civic engagement and heard speakers from the community. They had reached out to homeless people. Now they experienced what it was like to work for a law that could have a big impact on their families, their neighborhood and the biggest city in Texas. 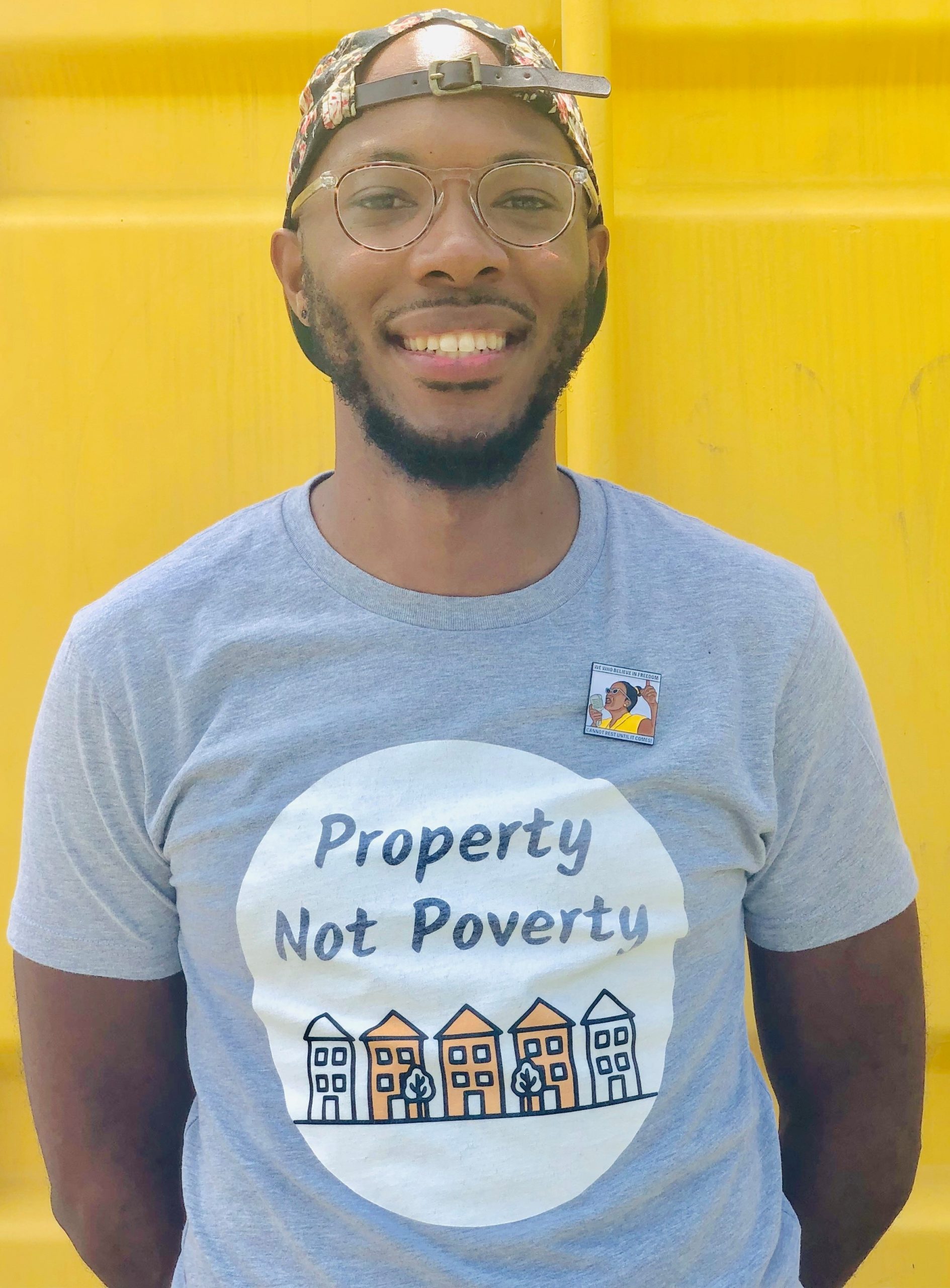 “Organizers with Fight for $15 came and brought some of their fast-food workers who are activists,” Fennell said. “It introduced the students to adults who were like them and from a similar context as themselves or their parents – working people who are in the midst of that struggle and are speaking up for themselves. It gave them a mirror to see what’s possible for them: ‘These people are very similar to us and they are taking an active stance, not a passive stance.'”

From early May to the third week in July, the teens created a strategy and put it into action. Fight for $15’s existing Houston plan was a starting point, and, indeed, the students accompanied organizers on campaign outings. And they developed a plan of their own. With support from two teachers who belong to Just Love, they did “power mapping” of Southeast Houston and decided on the all-important “one-to-one” organizing tactic: conversations with individuals.

“It involved them passing out fliers and talking with people in the neighborhood, often in large apartment complexes,” Fennell said. Focusing on young people and their parents – and using social media as well – they invited them to gatherings to hear their concerns, discuss what might be done, introduce the Fight for $15 and get commitments of support. The $5,000 NIN grant provided printed materials for the campaign, food and refreshments for the campaign gatherings, small stipends for the student activists and college scholarships of $1,000 each for two of the graduating senior activists.

‘A small group can create change’

One scholarship recipient is Elaina Thomas, a 2019 Worthing High School graduate now majoring in social work at the University of Houston. As a live-at-home student working part-time at a Coach store, she knows something about making ends meet.

She said hitting the streets to hand out fliers and talk to people taught her something about activism. “It takes a lot,” Thomas said. “Community organizing and making people aware – it’s a process. 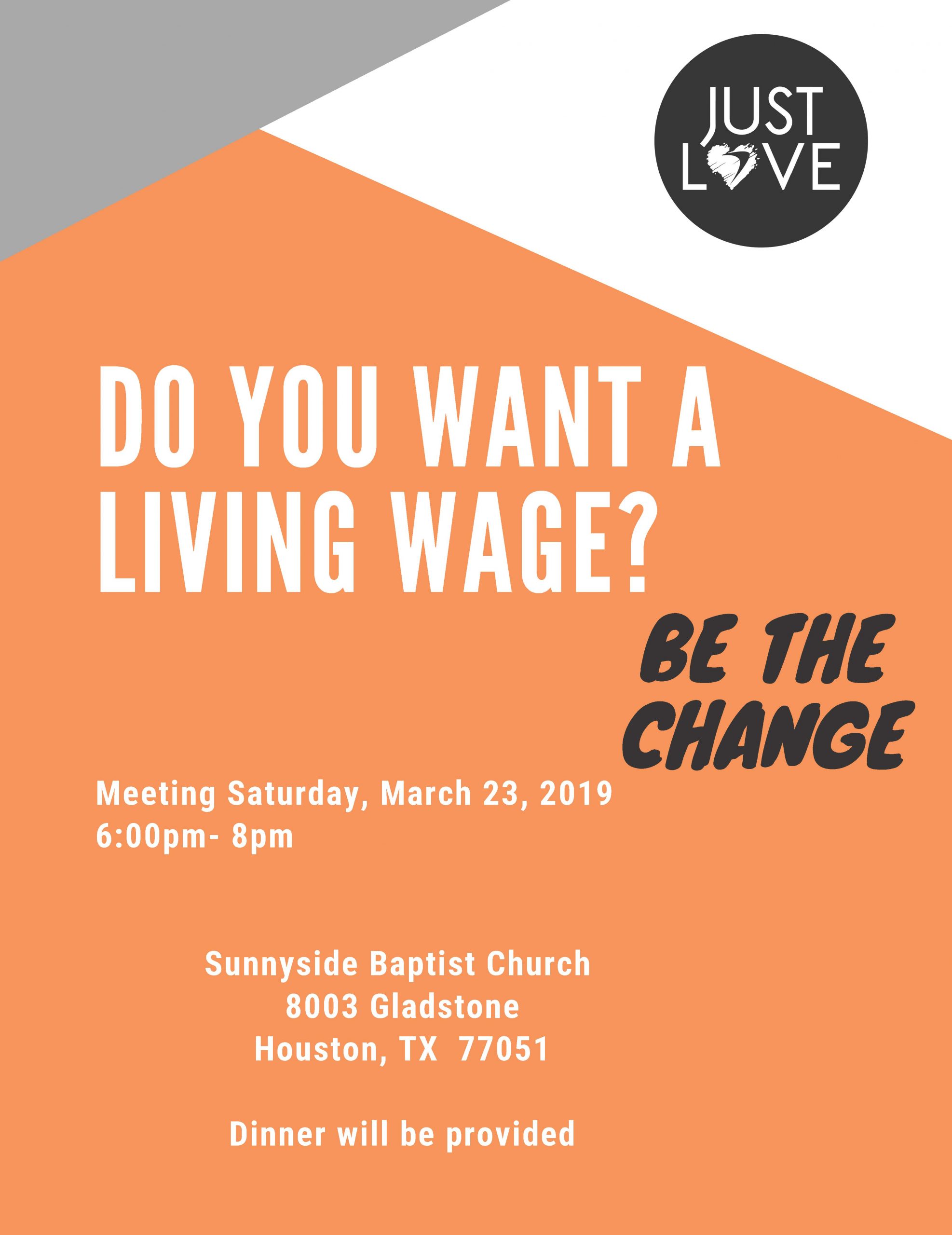 “Having a conversation is a big deal. People don’t want to fight for the unknown. So when they’re more educated about an issue, they’re more likely to go after what’s right. There are people who are not receptive – you can kind of gauge if they want to talk to you. Everyone’s kind of busy. But if two people out of 10 take two minutes to talk to me, it feels good. A small group can create change.”

The minimum wage law hasn’t passed yet, but it has received important community endorsements over the years and may surface in this fall’s mayoral campaign. “I’m actually hopeful,” Thomas said. Noting a recent salary increase for teachers, she hopes better wages won’t be far behind for “working-class people who don’t have degrees.” “I think the change is going to happen,” she said. “I’m hopeful that it’s going to be sooner than later.”

‘It sparked something inside of me’

She is grateful now for the scholarship – “every dollar helps,” she said – and, equally, for the church’s concern for its neighborhood, which she saw from the time a friend invited her to Young Change Makers more than a year ago.

“I had never had a conversation with a homeless person, but we did some outreach, cleaning up streets in a homeless community not too far away from the church,” Thomas said. “We actually sat down with a couple of homeless families. Just to know the road that leads people to being homeless – I took a lot from that.”

And she’s grateful for role models, both in this summer’s program and in the church. “I’m passionate about my community and what I can do to help the community,” Thomas said. “A lot of the people who attend Just Love are educators, and when I speak to them, they’re passionate about it also. They’re working for the same goal and still providing for their households. It was kind of encouraging to see. I was happy to see successful people who actually love what they’re doing. It was kind of refreshing – it sparked something inside of me, like you can still do good in your community.”

Neighbors in Need (NIN) is a special mission offering of the United Church of Christ that supports ministries of justice and compassion throughout the United States. NIN grants are awarded to UCC churches and organizations doing justice work in their communities. The grants fund projects ranging from direct service to community organizing and advocacy that addresses systemic injustice. This year, special consideration will be given to projects focusing on serving our immigrant neighbors and communities. Applications are now being received for the next round of grants. Click here to apply by the deadline of Sept. 30.

The 2019 theme for the NIN offering is “Love of Children.” Most UCC congregations will receive the NIN offering on Sunday, Oct. 6, 2019, as part of their World Communion Sunday observances, but local churches may also select a different date.