‘God-sent’ gifts, volunteers fix hurricane-damaged home, thanks to One Great Hour of Sharing

“If it wasn’t for God and you people, I wouldn’t be in my house tonight.”

That’s how Josephine Henry (front row, left, in the picture) described the situation as a crowd joined her recently – before the COVID-19 crisis – to dedicate her restored home in Wilmington, N.C. Hurricane Florence had torn the roof off, but now it was fixed, thanks to One Great Hour of Sharing donations and volunteer work by United Church of Christ members and others. 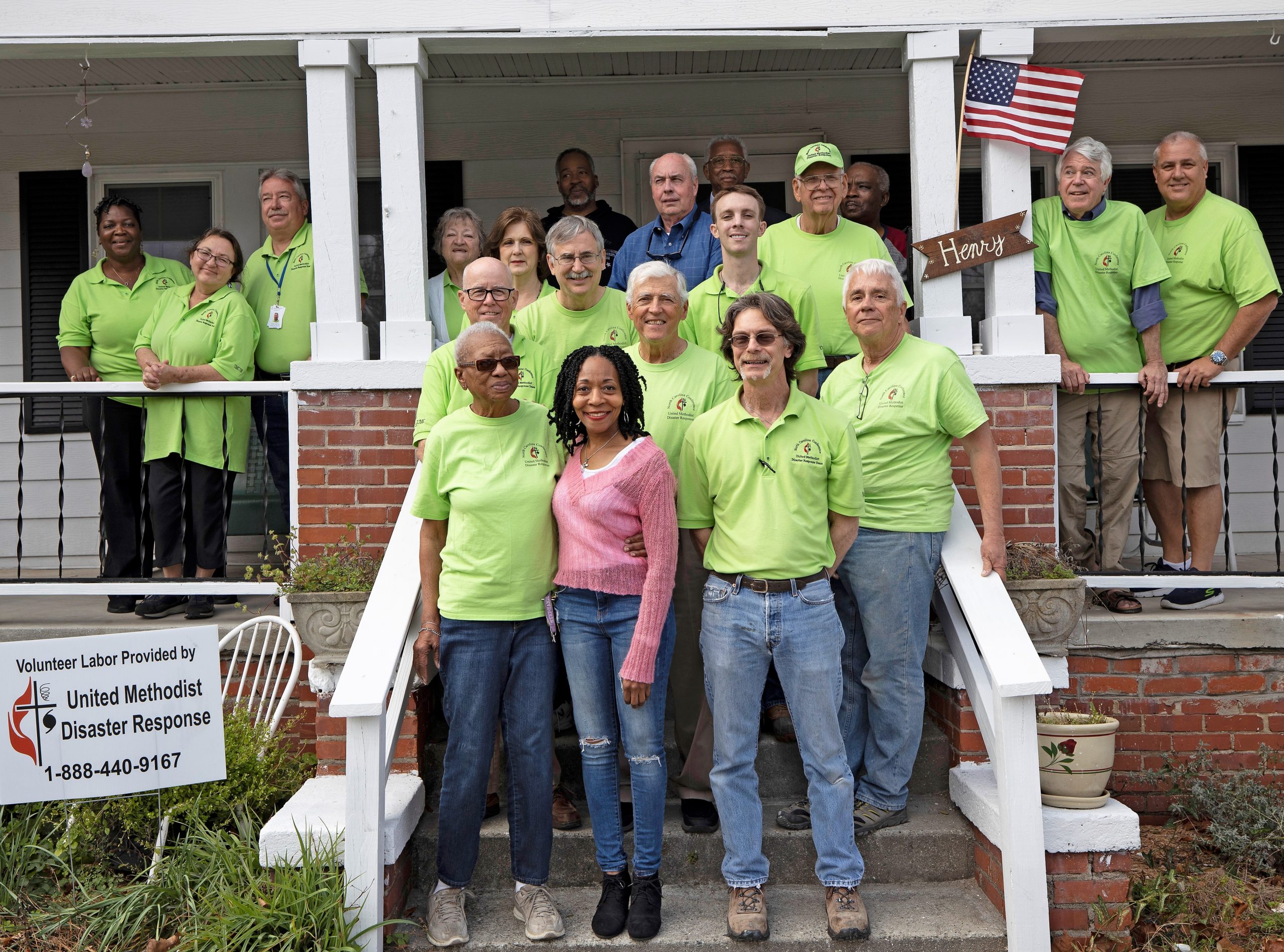 “When the storm came, I was in my living room,” Henry said in a recent interview with United Church News, remembering September 2018. She had a tin roof, but when she heard the sound of damage, she thought it was coming from the house next door, also made of tin. Some rain came in, so she wiped up the water. Her daughter called to check on her, then came and took her out for a meal.

It was only upon returning that she realized how badly her roof was damaged. “When I opened the front door, there was the sky looking at me,” Henry said. “I cried, turned around and went back to my daughter’s house.” For 19 months, she spent nights there and days at her son’s home. Her house was uninsured. After months of exchanges with the Federal Emergency Management Agency, she learned FEMA could not help her, she said.

Then, in June 2019, came a call from someone named Steve, offering help. He was with one of 15 recovery teams assembled cooperatively by UCC Disaster Ministries and its regional counterpart in the United Methodist Church to help the southeast United States rebuild. For six months, Steve brought work crews to Henry’s house – not only to fix the roof, but to strip the interior back to its studs, haul away damaged materials and fully renovate it. “That is a God-sent man,” Henry said. “Workers came from Canada and everywhere. Ohio. Upstate New York. And from the West. I don’t remember their names, but I remember every one of them.”

One was the Rev. Charles Whiston (left), a UCC minister from Maine, retired and living in Wilmington. He said he had enjoyed this kind of work before, “leading mission trips to the Gulf Coast post-Katrina, both in New 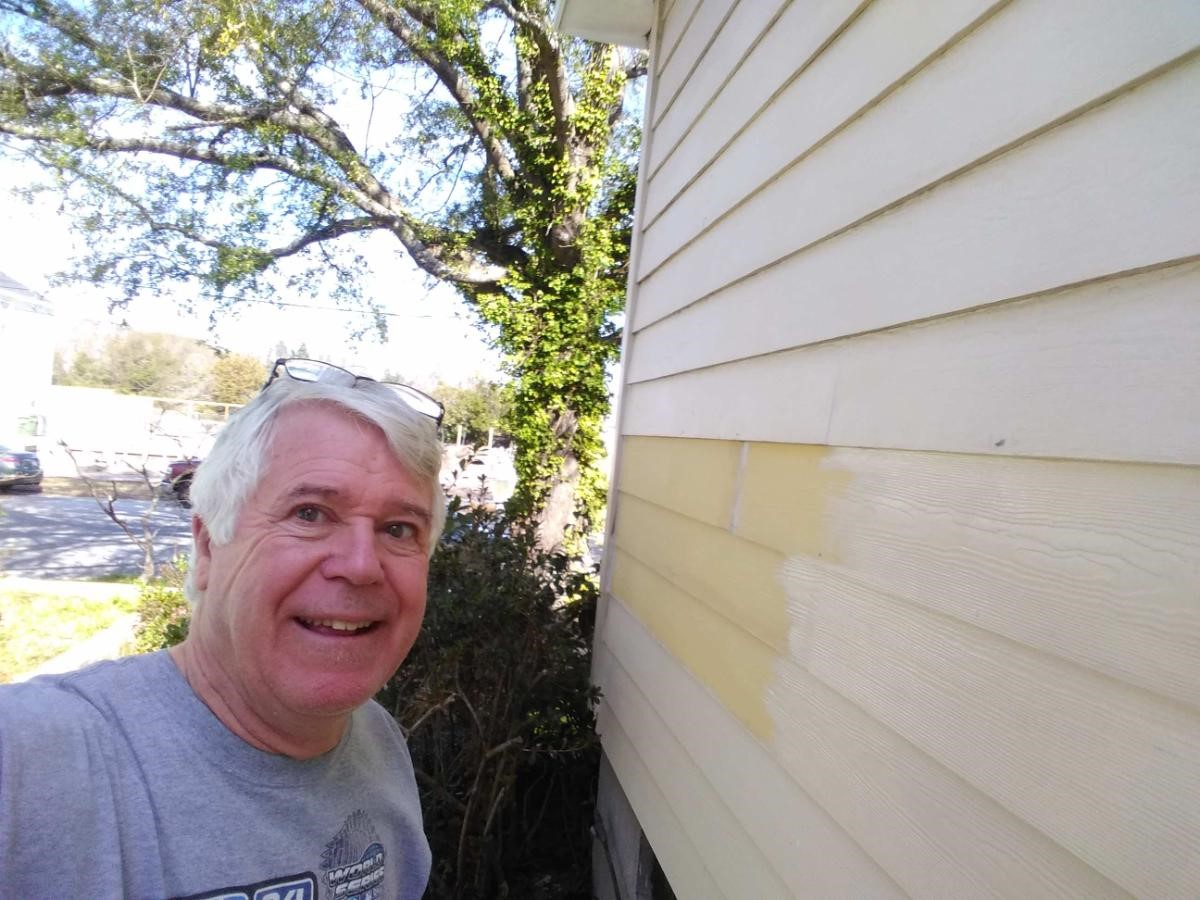 Orleans and at Back Bay Mission in Biloxi, Miss., where I also spent much of my sabbatical.” Now he appreciated pitching in with a mostly Methodist work crew nearby. “Good spirit and camaraderie,” he said. “Come when you are able, leave when you must, do what you feel comfortable and ask what you’d like to learn.”

In the continuing relief work in that part of North Carolina, “Methodists are the ‘boots on the ground’ for administrative and practical reasons – for efficiency,” Whiston said. “I’m glad the UCC is financially supporting the effort.”

One Great Hour of Sharing gifts still being received

In 2019, the year when the work on Henry’s house occurred, the UCC contributed $38,000 to Hurricane Florence disaster relief, thanks to gifts received through the One Great Hour of Sharing special mission offering. For the moment, all volunteer relief-work opportunities are suspended due to the coronavirus pandemic. But UCC members and congregations can still contribute financially. The suggested date for local churches to receive the offering – set before the COVID-19 outbreak – was March 22. But the offering can be received anytime and will still benefit all the mission work OGHS makes possible, including disaster relief, said Phyllis Richards, the UCCs acting team leader of humanitarian and development ministries. Volunteer teams will again be needed after the pandemic passes. OGHS information and an online giving portal are here.

When it comes to disasters, this kind of long-term recovery is an OGHS specialty, often lasting long after first responders have done their important work. The donations that make it possible – money and volunteerism – benefit the giver as well as the recipient, Whiston said.

Whether the distance is from Maine to Mississippi or just to a nearby neighborhood, “I believe these are border-crossing experiences – going outside our familiar territory as well as our commonly held knowledge and perceptions of area and people,” he said. “Broadening our horizons while we open our hearts, realizing that no one lies outside God’s family tree.”

“They are God-sent people,” Henry said of those who fixed her home. “They did not have to do it. They took their expertise to come help me when they found out how I was.”