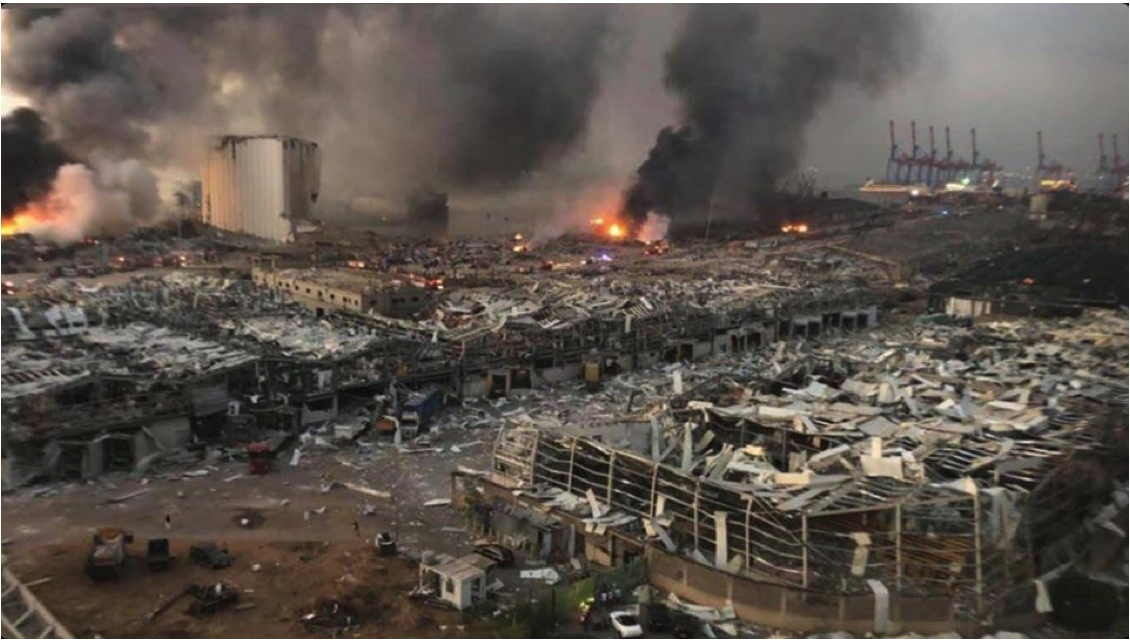 The executives of Global Ministries, the common overseas ministry of the UCC and the Christian Church (Disciples of Christ) are reaching out to several mission partners in Lebanon after two colossal explosions rocked the city of Beirut on Tuesday. The massive blast on Aug. 4, triggered by a fire near a storage facility that housed highly combustible chemicals, leveled an area around the Port of Beirut.  More than 150 people are dead, over 5,000 were injured, and scores are reported missing.

Immediately after the tragedy, UCC Associate General Minister, the Rev. Karen Georgia Thompson and the Rev. Julia Brown Karimu, co-executives of Global Ministries, and Peter Makari, Global Ministries executive for the Middle East and Europe, got in touch with and offered prayers for the schools, organizations and agencies in Lebanon that the UCC and Disciples work with, some of which are close to the explosion site. The executives shared this statement and prayer, reporting that partner staff in Beirut are safe, but the facilities have been damaged. Today, they wait for further word as to how Global Ministries can be of assistance.

“This is a huge challenge for Lebanon, in a moment when they are experiencing higher COVID-19 rates, an already unstable economy and financial crisis, as well as spillover from the conflict in Syria,” said Makari. “So far, we don’t have specific requests from partners, but I know those will be coming soon.”

Global Ministries has three mission workers deployed in Beirut. All have reported that they are safe. Leda Zakarison, from the Pacific Northwest Conference, is working with the Forum for Development, Culture, and Dialogue. Global Ministries supports its work in refugee response.

Nishan and Maria Bakalian are mission workers from the Penn Southeast Conference serving with two partners based in Beirut, the Union of Armenian Evangelical Churches and the Haigazian University. They first thought the shock of the explosion was an earthquake.

“As the ground rolled under our feet at Haigazian University, we stirred with uncertainty as to how long it would last,” they write. “Seconds later, when an explosion blew out windows all around, we realized that the first was not an earthquake at all, and that we had entered a new, sad chapter in the current history of Lebanon. Sorrow has been heaped upon sorrow.”

The BBC reports that President Michel Aoun said the blast was caused by 2,750 tons of ammonium nitrate, a fertilizer and an explosive, that had been negligently warehoused.  The explosions were felt as far away as the island nation of Cyprus, just across the Mediterranean. As many as 300,000 people have been left homeless by the blast, said Beirut’s governor Marwan Aboud.

“The huge inferno at the Port of Beirut that devastated, in varying degrees, nearly half of the capital city brought Lebanon yet lower into the mire and yet farther from any hope of recovery from its travail of the past months,” the Bakalians’ message continues. “A mismanaged and crashing economy, unsuccessful and feeble attempts to combat corruption, stresses of hosting a refugee population numbering nearly half of the country’s resident citizens, reduction of electrical supply to 3 or 4 hours a day, the diversion of crucial resources to combat the coronavirus – all of these were more than most could bear. Now this, and people ask ‘What’s next? What more could possibly happen?’”

The Bakalians said one side of their apartment had all the doors and windows blown out. And while many of the buildings around them have sustained a great amount of damage, they grieve most for the crushed spirit of the people, which they call the tragedy’s “greatest casualty.”

Amnesty International and Human Rights Watch (HRW) are calling for an independent investigation into the explosions. In a statement, HRW said it had “serious concerns about the ability of the Lebanese judiciary to conduct a credible and transparent investigation on its own.”

As the Global Ministries executives write, “We anticipate that we will receive reports from partners in the coming days as they assess the extent of the impact, and will likely also receive appeals for emergency response and for repair of facilities.  In the meantime, we ask that you join us in offering fervent prayers for the people of Lebanon, our partners, and our mission co-workers serving there on our behalf in these especially challenging and frightening times.”

Learn more about the UCC response, and donate here.