Faithful Witness at the Border group unites for communion and confrontation

A service of communion on the Mexico side of the United States Border Wall on Tuesday, August 28, underscored the stark realities of current U.S. immigration policies and border militarization for more than 80 people of several faith traditions participating in the United Church of Christ’s Faithful Witness at the Border. Hours following that sacred vigil, a time of witness, with a demonstration at the U.S. Border Patrol Offices in Nogales, Ariz., as participants prayed for the detained children, their parents, border patrol agents and issued a moral demand — that families be reunited.

“We gather here for communion, remembering Jesus the martyr, Jesus the migrant,” said the Rev. Bill Lyons, Conference Minister, Southwest Conference UCC, one of event organizers, as the group gathered in Nogales, Sonora at noon under blazing sunshine in the grass at the border wall. “We remember the souls killed at the hands of the border patrol, and the people who perished in the desert.”

They also prayed for justice for a 16-year old boy shot through the border wall for throwing rocks.

Jose Antonio Elena Rodríguez died in 2012 at the hand of U.S. Border Patrol agent Lonnie Swartz, who was acquitted on a murder charge in April. His second trial, on voluntary and involuntary manslaughter charges, begins October 23 in Tucson.

The group, in a moment of reflection, placed their hands on the border fence as the Rev. Delle McCormick, senior pastor of Rincon UCC in Tucson, invited them to bless the wall. “Think about all the tears shed, the lives lost, the limbs broken climbing this fence,” she said. “Think about the heartbreak that is here. Whatever your prayer is, take a moment in silence.”

Before the vigil at the wall, the group got a look at migration from the Mexican side. After crossing the border into Nogales, Sonora, Mex., they met with Manuel Morales, who works with BorderLinks, an organization that provides experiential education around migrant issues. He said the city, divided by the border wall from Nogales, Ariz., has grown from 50,000 to more than 400,000 people with the growth in migration. Morales talked about the changes in the structure of the wall, which drives more people into the desert as they look for other, more dangerous, places to cross. He urged participants to support the organizations that “help my migrant siblings. What I can say is that when you go back to your places of origin and you see a migrant — extend your hand.” 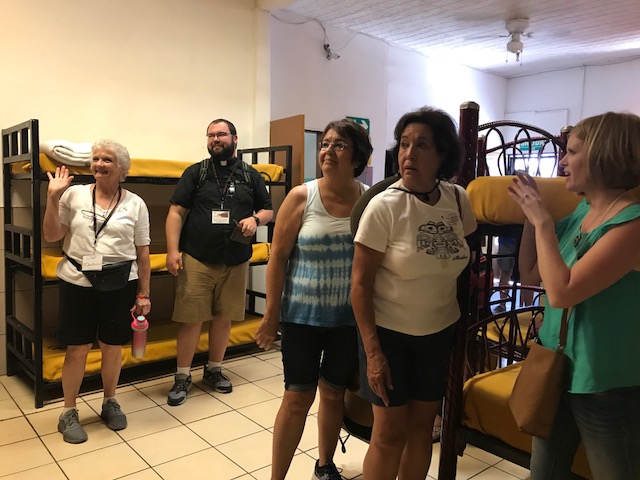 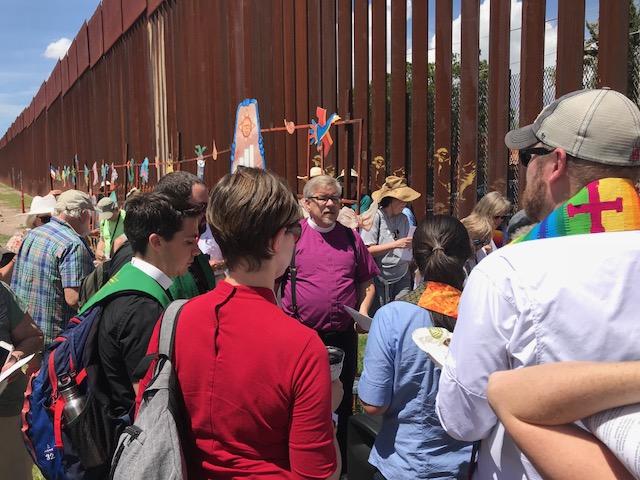 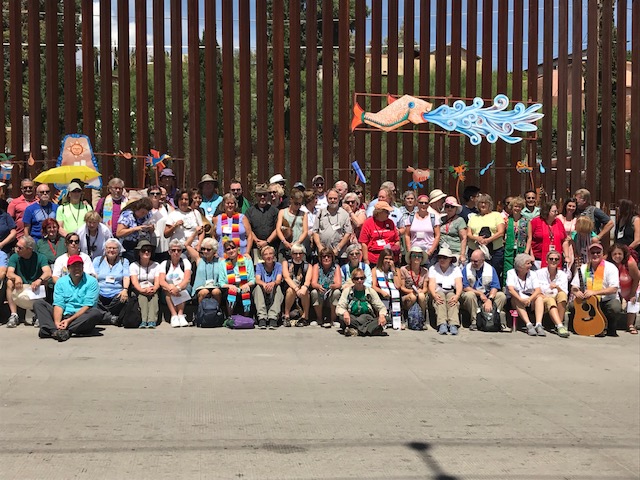 The group, which traveled from the host church, Good Shepherd UCC in Sahuarita, Ariz., in several vans, visited a few shelters in Mexico, some set up by private families, that offer meals and a place to stay to migrants who have no where else to go. One of them, La Roca, is benefiting from the gifts of the wider United Church of Christ, in the form of new mattresses for the dormitory. At the Comedor, operated by the Catholic Kino Border Initiative, they saw several men arrive for lunch who were given deportation orders the day before, which the group witnessed during Operation Streamline proceedings in Tucson. Organizers at all the shelters said they have noticed the impact of family separation, and the increase in family migration from Central America.

Finally, after a return to the U.S., the group delivered a visual message of faith and hope in the street in front of the Border Patrol Station in Nogales. Carrying signs, lining the curb, the Faithful Witness participants chanted and prayed as Border Patrol agents and local police assembled to watch.

“As people of faith we gathered to express our outrage at the violation of human rights,” Lyons said. “Immigration and family separation are not political issues for us, they’re deep moral issues and we’re utilizing our first amendment rights to share our faith voice to proclaim the dignity of all humanity and Christ’s love for all people.”

Lyons talked about a God that does not draw borders and the need to embrace the humanity of all people. The Rev. Hannah Bonner, a campus chaplain in the United Methodist Church who also serves a local ministry for asylum seekers, shared a recording of a six year old boy who sang her to sleep the night before — with a sad song of goodbye. “This is to remind you of who we are criminalizing here,” she said. “No one comes to our border without a very good reason.”

The Rev. Traci Blackmon, executive minister, UCC Justice and Local Church Ministries, offered a prayer where she asked ‘How are the children?’ She called for a moral response from Border Patrol agents and the administration. “We come to this Border Patrol station, not as an enemy but as friend, because we are all connected by God. As you go about your jobs of border enforcement, as you go about guarding the border, I pray that you guard your hearts, so that you don’t lose touch with the humanity that is being caged inside; so you remember to treat those who are being detained with the same care and dignity that you would treat your own family. You must guard your souls, just as we must guard the soul of this nation.”

After Nathan Watts, associate minister at Good Shepherd UCC, read a litany of names of all the souls who recently died in the surrounding borderlands in search of a better life, the Rev. Tracy Howe Wispelway, UCC minister for Congregational & Community Engagement, closed the service in song.

“Immigrants are our friends, you do not walk alone. We will walk with you and sing your spirit home.”