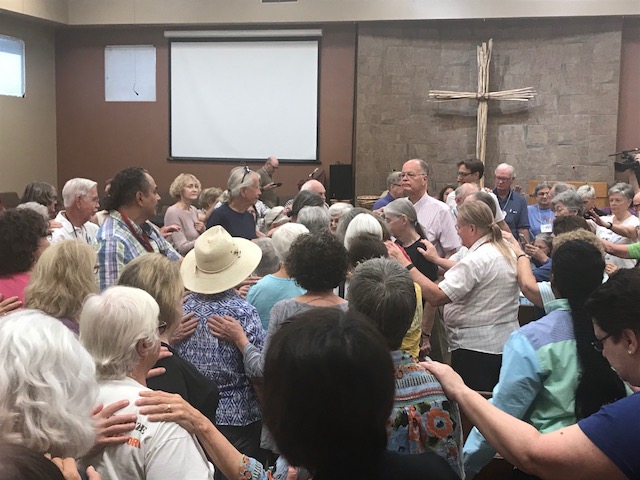 More than 100 people from seven Conferences in the United Church of Christ, joined by members of three ecumenical partner Churches, are converging on the border town of Sahuarita, Ariz., for several days of study and service around immigrant justice.

The Rev. Bill Lyons, Conference Minister of the Southwest Conference UCC, the Rev. Randy Mayer, pastor of the host church, Good Shepherd UCC, and a half dozen members of the National Staff welcomed a majority of the participants during a Sunday evening supper August 26, to talk through understandings of Border/Immigration Ministries, review current U.S. immigration policy, and to share an itinerary that includes a trip to Nogales, Sonora, Mex., a communion service at the Border Wall, and a walk along migrant trails in the desert.

To break the ice, the organizers of this Faithful Witness at the Border, August 26-30, invited those present Sunday night do two things— to talk about their current experiences with Border/Immigration Ministries and to pick a lanyard color, which divided them into teams of travel partners.

“We were intentional about breaking them into van groups (where people can become better acquainted) to create networks across the denomination,” Lyons said, hoping to begin to forge a community to build power with immigrants in locales across the United States.

The group heard from Nathan Watts, an associate minister at Good Shepherd UCC, talk about ‘prevention through deterrence’ — the increased militarization at the United States-Mexico Border, and the criminalization of people who cross the border — to make migration as difficult as possible. He talked about the U.S. government infrastructure and individuals set up to keep migrants out. He visually shared the ‘funnel effect’ of the border wall, using volunteers to show how U.S. policies are pushing people from the cities into more dangerous remote areas, where crossing not at a point of entry without a visa makes one arrestable and can lead to incarceration. It’s also a crime that negates one an opportunity to claim asylum.

“Not only are we trying to address the very physical deterrents,” Watts said, “we are challenging the mentality that makes this philosophy okay.”

Katie Adams, UCC Domestic Policy Advocate in the Washington, D.C. Office, shared the still-painful fallout from the Justice Department’s zero tolerance policy, which separated families at the border early this spring. “Nearly 3,000 children were separated from their parents, 565 of those separated kids are still not reunited with their parents. 300 children had their parents deported.” Adams said the administration is currently “looking to make the the immigration policy more palatable.”

Noel Anderson, organizer of the UCC National Collaborative on Immigration, a group of pastors and lay leaders who mobilized years ago around issues of unaccompanied children and family separation, noted that this is not a new issue; “what has changed is the level of hateful rhetoric against all immigrants. Part of a broader white supremacist, white nationalist agenda, which we need to address as part of our broader initiative around racial justice work.” 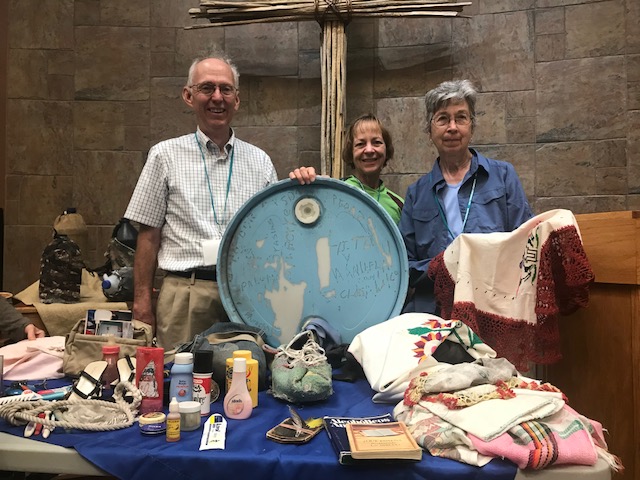 Early Monday morning, the gathering met with The Green Valley Samaritans, a seasoned group of local activists representing a host of faith traditions or no faith tradition. They walk the trails in the Sonoran desert, put out water containers, bring gallons of water to replenish area water stations, and occasionally during their patrols, encounter migrants in need of help. They also work with shelters and migrant support organizations on both sides of the border.

The Samaritans shared the success of one of their pilot projects — Life Straws — 1,000 small portable water filters they have been distributing recently, which, as one of the Samaritans said, are seen as “Manna from heaven — I feel like we have saved the lives of a lot of people.” 1,000 more, at about $12 each, are now on order.

Monday afternoon, the group traveled to U.S. District Court in Tucson to witness Operation Streamline proceedings. The fast-track trials for people arrested in the desert happen en masse every Monday-Thursday afternoons in Tucson, and have since 2008. The migrants, unshackled just before they were brought before the judge, face criminal prosecution, not a civil immigration offense. On August 27, the Hon. Bernardo Velasco had 75 names on his docket.

In groups of seven, each flanked by an attorney, the migrants appeared to enter a guilty plea to illegal entry. It took the judge longer to read them their rights than it did to process and sentence each group.

“The court was more concerned with the process than the people,” said the Rev. Sharon Stanley-Rea, director of Refugee and Immigration Ministries, the Christian Church (Disciples of Christ). “It’s more about the consequences, not about compassion.”

Judge Velasco, in conversation with the group after the proceedings, pointed out that the court is charged with following the laws of the land. Voters have the power to change the laws, and the course of government, beginning with the mid-term elections this fall.

“We talk about issues — but the bottom line line is we are talking about people,” Lyons said. “Real people like us.”

“We need to be doing more,” Anderson said, “To learn to do more together, in the model of Immigrant Welcoming Congregations, to create spaces that are truly welcoming, regardless of status.”

That, Watts said, is what this week is all about. “How do we build power WITH immigrants? — to move from a ‘power over’ relationship to building power together to change the situation.”