Ecumenical Advocacy Days work for a world without borders or boundaries

More than 750 people of faith converged on Washington, D.C., last weekend for a national gathering centered on advocacy. They came together to stand with brothers and sisters who have been uprooted in this country and around the world, and to gain the tools necessary to push for just policies to change and better the lives of immigrants and refugees living in the United States.

Ecumenical Advocacy Days 2018 drew activists from the United Church of Christ, partner denominations and organizations together Friday, April 20 through Monday, April 23, to learn from each other, to pray together and to lobby members of Congress as one community of faith.

“It’s hard to think of an issue that is more at the core of our faith than welcoming immigrants and refugees,” said Sandy Sorensen, director of the UCC Washington, D.C office and one of the event’s hosts. Citing Matthew 25 in her remarks, Sorensen welcomed the group to the UCC pre-event gathering Friday morning at First Congregational UCC, “As Jesus said, ‘When I was a stranger, you welcomed me. Love your neighbor as yourself.’ We are acting out of the core of our being as people of faith.”

The April 20 session at First Church brought together a number of UCC clergy and lay leaders who have been involved in the work, responding to the needs of immigrants and refugees in their communities. By sharing their stories and experiences, they hoped to create an opportunity to better prepare other advocates to join them. To answer the question, “How do we respond, work together, organize, and build networks with those who are most impacted?”

The Rev. Noel Anderson, organizer for the UCC Collaborative on Immigration, and grassroots coordinator for immigrant rights, set the tone for the discussion.

“The faith community is rooted in the tradition of speaking truth to power in prophetic witness and resisting. We cannot idly sit by and watch this country try to take their policies back to Jim Crow,” he said. “We have a moral imperative to stand up in this moment, to walk in solidarity with those being targeted by this administration; we are in a fight for the soul of this country.”

Anderson talked about organizing for immigrant rights, he shared where UCC is in that work and how the UCC is connected with broader interfaith community. He said that under the current administration, families are being separated by an executive order to Immigration and Customs Enforcement to go after every person they can. He lifted up the 700,000 undocumented youth, protected by DACA, who still face uncertainty because Congress has “refused to replace it with anything sensible.” He emphasized that there is much work to do — as the government slices the refugee program in half, cuts on the number of immigrants allowed to come to the U.S. from Latin America and Africa, and continues a call for a wall on the southern U.S. border — and urged people of faith to fight this attack on freedom of religion, by organizing a justice model that walks with those who are impacted by these unjust policies. 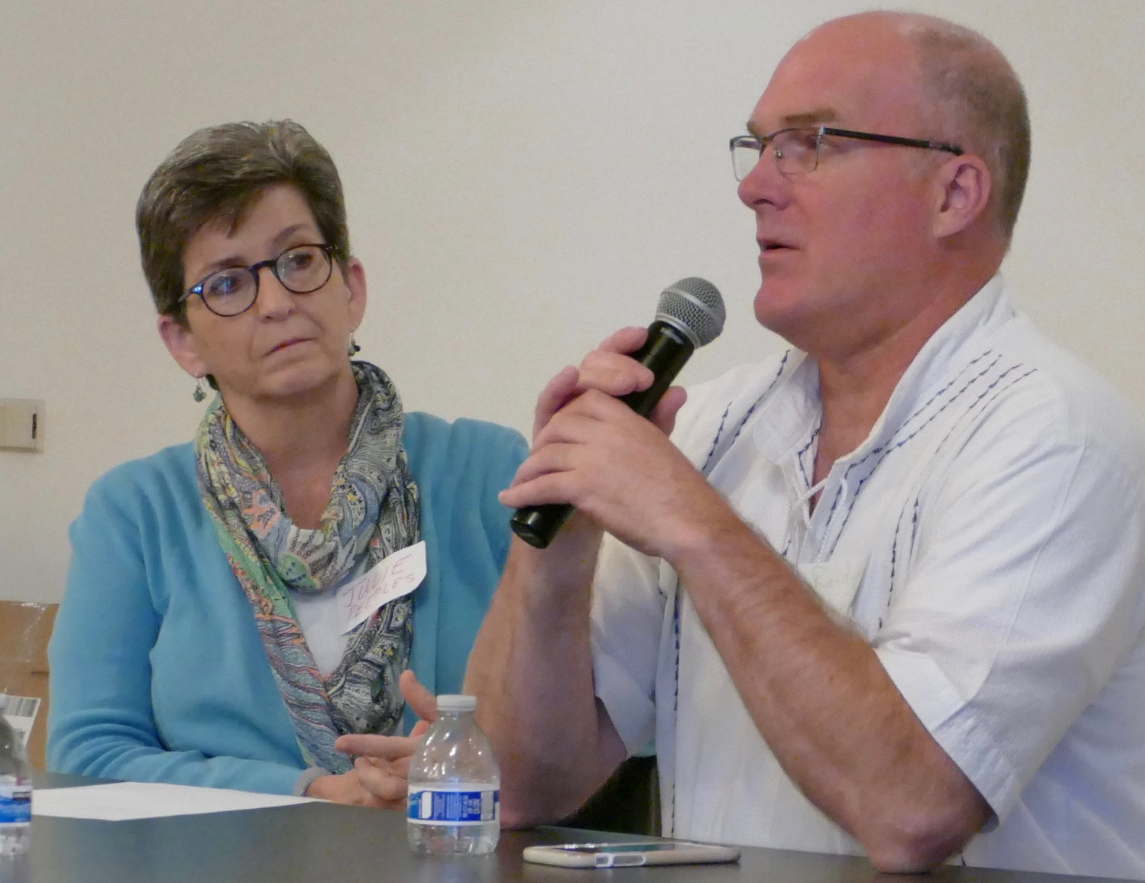 The Rev. Randy Mayer has long been walking with people in need, many who have shown up at his doorstep. He pastors Church of the Good Shepherd UCC, in Sahuarita, Ariz., 35 miles from Mexico. He and his congregation have long been assisting refugees and immigrants who cross the desert seeking a better life. “As the church, we need to find ways to always be ready, to be creative,” he said. “In our community, because we’re so close to the border, we are finding there are always ways we can be creative. We don’t always know how. But as the church, we need to respond.”

The Rev. Julie Peeples, senior pastor of Congregational Church UCC in Greensboro, N.C., shared how her congregation became a sanctuary church. She said when you see a problem, you just have to try to take on a little piece of it. “We could easily have talked about [becoming a sanctuary church] for several years. We would never have felt 100 percent ready. I tell people, it’s like marriage and children. You will never feel like this ‘this is the time and we’ve got it all figured out.’  But once we had a person and a story attached to all the facts and figures, the church said ‘How can we say no?'”

On Monday, more than 400 people took that leap of faith, spending time on Capitol Hill during Lobby Day. Sent off to speak with their Congressional representatives by a prayer vigil and public witness at the Methodist Building, UCC General Minister and President the Rev. John Dorhauer urged the crowd to be the hands and feet of the living God until “until those who occupy the halls of power of this city have their hearts of stone melted,” he prayed. “We will do this until we see this earth the way you created it, without borders or boundaries.”