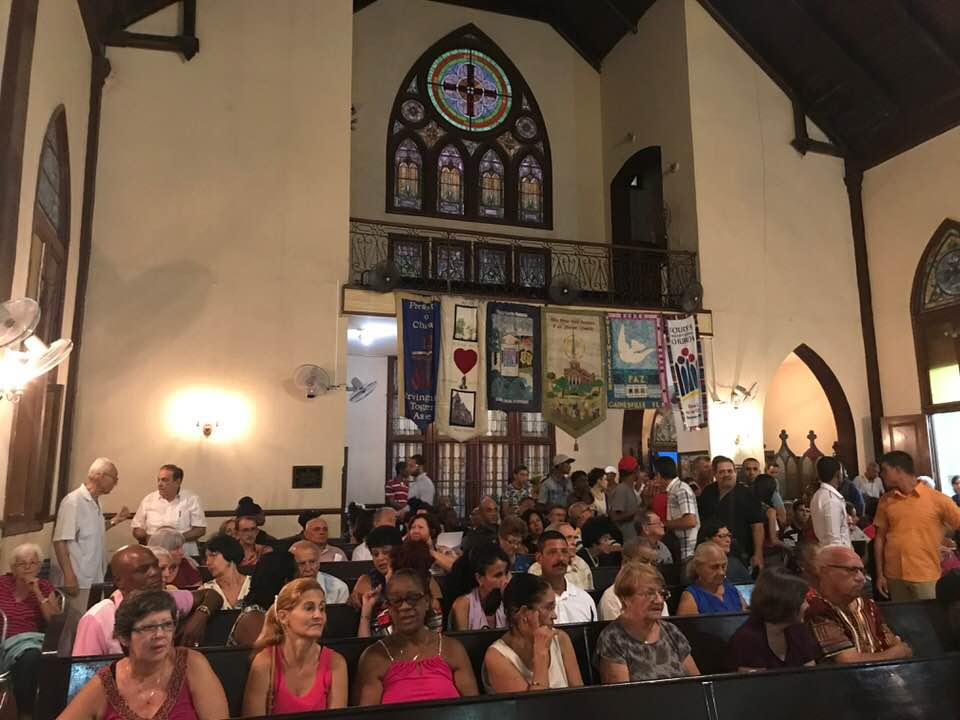 The Rev. John Dorhauer spent three days in Cuba with the National Council of Churches last month. The NCC delegation met with leaders from the Cuban Council of Churches, and with Cuban government representatives in the Religious Affairs Office. There are strong ties between the churches of the U.S. and Cuba, and those gathered hope to help balance the diplomatic situation between the two countries, to get discussions to normalize relations back on track. The groups also came together in worship to celebrate the 70th anniversary of the World Council of Churches at a standing-room only service at First Presbyterian Church in Havana.

Dorhauer writes in this short reflection, his impressions of Cuban commitments to community.

“First, I was so impressed with what were clear commitments to anti-discrimination. This came out in both our conversations with the Council leaders and with the government officials. We learned that 63% of the elected parliament representatives are women, and that 54% are black. We learned that the Cuban Council of Churches includes affiliated memberships for Jewish partners, Muslim partners, and a variety of others. We heard clear commitments to end discrimination in the culture of any kind: whether based on gender, race, religion, or sexual orientation. That was the language they used.

“I was also impressed that in both conversations, with the Council and with the government leaders, we were told about an initiative to rewrite their constitution. Both the process and the content were matters of great pride to them.

“Regarding process, there was much talk of a referendum to engage the entire population in a review of the proposed new constitution. Every little village and town and city had a process to review and provide feedback for the evolving document that will become their new constitution. No voice would be left out.

“Regarding content, the new constitution will, in their words, reflect both commitments to international documents they have already signed that support human rights, and commitments to recognize that the world is changing. As it does, Cuba wants to stay ahead of, not behind, those cultural changes.

“It was in that context that with both groups of leaders, they talked about article 68. Article 68 would guarantee every citizen the right to marry whom they choose. There would be no discrimination based on gender or sexual orientation.

“Please remember that we met with the Cuban Council of Churches, and with the representatives of the government charged with liaising with the churches in Cuba. Most of the people of faith in Cuba do not support marriage equality. Here is what I heard from a former president of the Cuban Council of Churches, who is now a pastor in a local church and a voting member of Parliament: ‘Not one of my members in my church would support this. But I will vote for it. The Church should not impose their moral judgment on others in ways that would deprive them of human rights.’ I found that very moving. A government official we met with the next day said almost the very same thing.

“We were left with a sense that Cuba wanted to change with the times and become a nation that led the way in support of human rights for all its citizens.

“It struck me that a leading voice within the church in the Cuban context had a strong sense that, while the church had a right to express its beliefs, it did not have the right to use the government to impose those beliefs on others – especially when doing so would deprive them of human rights.

“That is in sharp contrast to much of what we hear from our own political and religious leaders today.”

Dorhauer, delighted by the hospitality of the people of Cuba, pIans to go back. For now, he said, “I find myself an even more ardent voice calling for an end to our embargo and blockade against Cuba. These are good people, committed to living in ways that do honor to our own commitments to build peace and justice between peoples. They are struggling to get out of poverty. We can help.”