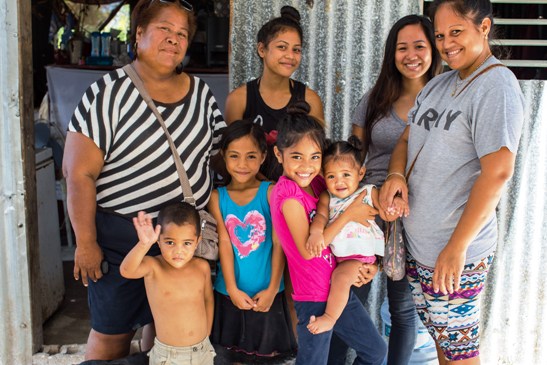 For two struggling families – the Kaipats and the Roppuls – an $11,600 grant from UCC Disaster Ministries will mean recovery at last, two years after the powerful Typhoon Soudelor passed directly across their western Pacific island of Saipan, part of the U.S. Commonwealth of the Northern Mariana Islands.

Winds close to 200 miles per hour broke the National Weather Service's instruments on the island.  The Aug. 2, 2015, typhoon knocked down more than 500 telephone poles, left thousands of homes uninhabitable and overturned vehicles.  Much of the island was inundated, and critical infrastructure was destroyed.

Hundreds of Saipan's 55,000 residents were displaced, having to live in shelters or temporary housing.  Most of the island was left without power and running water for one to four months.  Even today, scores of residents are still struggling to rebuild their homes and lives.

"Deeply aware of Soudelor's devastation, UCC Disaster Ministries has been looking for an opportunity to play its part in recovery on Saipan," said UCC Disaster Ministries Executive Zach Wolgemuth.  "Our opportunity came in the form of a direct request from the long-term recovery group Commonwealth Advocates for Recovery Efforts, or CARE, to aid the Kaipats and the Roppuls.

"This is where UCC Disaster Ministries is at its best," Wolgemuth added.  "We're flexible, we're nimble, we don't forget, we stick around for the long term, and we fill gaps that others are unable to fill."

Here are the two families' stories:

The Kaipat family (pictured, above) consists of Francisca Kaipat and her many grandchildren who stay with her.  Francisca was in the process of rebuilding her home from an earlier typhoon when Typhoon Soudelor hit, destroying all of her progress and what was left of her home. "FEMA wouldn't give her any assistance for her home, because they said the damage was not 'Typhoon Soudelor-related,'" said CARE Director Jenny Hegland.  The Kaipats have now been displaced for over two years, living in a tin shack Francisca built on the property out of typhoon debris. "She is really looking forward to receiving assistance so she and her grandchildren can live in a safe home," Hegland said. 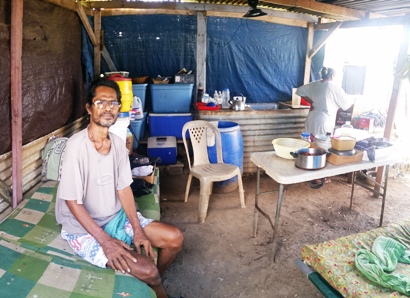 The Roppul family also has been struggling since the typhoon.  The father, Vincente (pictured, right), has a chronic medical condition and is barely able to walk.  He and his wife/caretaker Angela have been living in a tent on their property since Soudelor.  "Vincente has been patiently waiting for assistance, despite his urgent need because of disability," Hegland said.  "CARE has been able to hire a contractor to put up semi-concrete walls, but funds are needed for building materials to finish the Roppuls' home to keep them safe."

$10,000 of the UCC Disaster Ministries grant will go for the building materials the Kaipat and Roppul families need, and the remaining $1,600 to pay for the stamped blueprint for both houses.  These funds will return these families to safe and sustainable homes that can withstand future typhoons, Hegland said.

President Obama signed a federal disaster declaration for Saipan, unlocking $100 million from FEMA toward a total estimated $200 million in damages.  CARE formed after the Commonwealth's VOAD (Voluntary Organizations Active in Disaster) chapter invited a broad group of community stakeholders to form a coalition to address long-term needs.  An initial group of more than 70 network partners from the nonprofit, business, government, faith-based and education sectors first convened in late August 2015.

For the first eight months, CARE focused on cleanup and debris clearance, engaging more than 365 volunteers who provided more than 3,250 service hours.  By March 2016, the count of families still needing repair or rebuilding had been reduced to 500.

"In September 2016, FEMA started funding the plane tickets for skilled construction workers from Mennonite Disaster Service and World Renew to come to our island," Hegland said, "and rebuild homes for our families. With funding from the local government, business, and nonprofit community, CARE could start to pay for the building materials needed to rebuild homes and make them strong enough to withstand future typhoons."

As of June 2017, volunteer laborers had repaired or totally rebuilt 50 homes for families affected by Typhoon Soudelor, Hegland said.  In total, 188 families had received building materials to rebuild stronger homes. To date, 118 families, including the Kaipats and the Roppuls, still have open cases for building materials and/or labor.