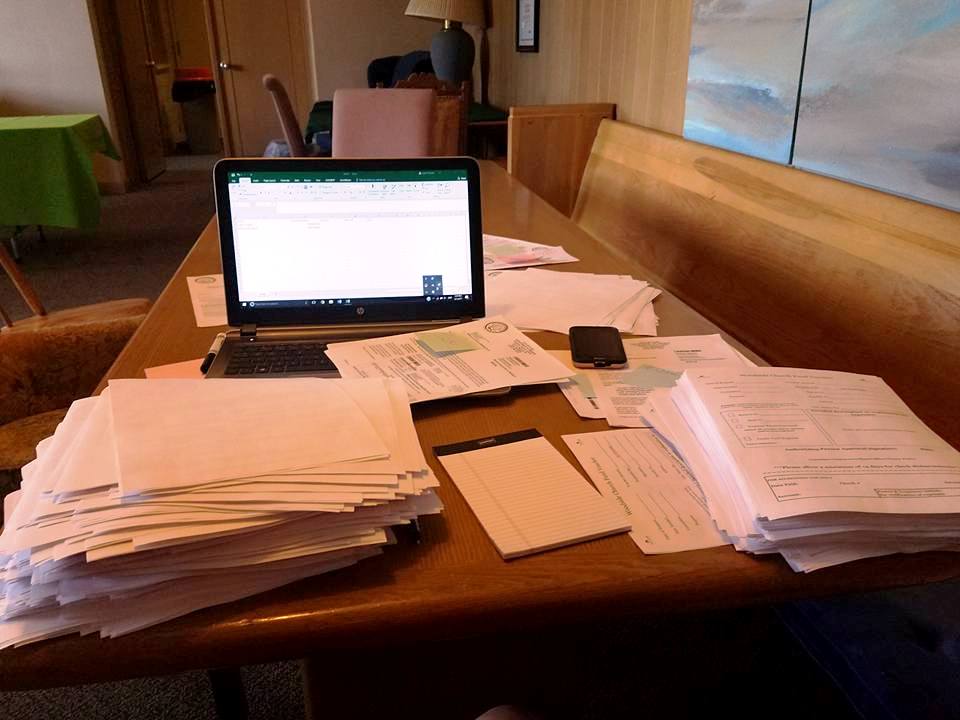 UCC Disaster Ministries funding to Genesee County Hispanic Latino Collaborative - La Placita is helping mitigate the impact of the ongoing water crisis in Flint, Mich., on some of its most under-served and overlooked residents.

A December 2016 grant of $25,000 helped the collaborative set up an interpretation and translation service. An additional $8,500 contribution this month is helping Spanish-speaking residents avoid water shutoff. (Pictured: Applications for help with water bills.)

Flint's water crisis began in April 2014 when the city switched its water source from the Detroit River to the Flint River with no anti-corrosive treatment.  Lead was detected in the water in February 2015, and a state of emergency was declared in December 2015 in this city of nearly 100,000.

Work to replace lead pipes and make other water infrastructure improvements will take years. Too many residents are still relying on bottled water for consumption and bathing.

The collaborative is housed at Woodside Church UCC in Flint, itself on the frontlines of responding to the water crisis.  (See June 7, 2017, UCC News.) Since May, it has been working with the church to help Flint residents with water bill shut off payments.

"Without having paid the water for months because they didn't believe they had to, people are frantic to make payments for the undrinkable water they have been subjected to for the past three years," said the collaborative's President and CEO San Juana ("Juani") Olivares.

"Although it is undrinkable, without water they will not have a method of maintaining hygiene or even maintaining cleanliness around their home. Our goal is to assist 42 to 43 families with at least a minimum of $200 to avoid a shut off."

The December 2016 grant of $25,000 from UCC Disaster Ministries enabled the collaborative to launch Spanish-English interpretation and translation services during lead testing and appointments with health providers and monitors.

Although the collaborative had been able to provide some medical interpretation support, there were still many instances where families and individuals were arriving at a medical appointment without an interpreter, and the medical provider was unable to provide one, Olivares said.

This is despite the mandate that federally funded medical facilities provide interpretation services.  "This is not a new problem," she said, "but the Flint water crisis has compounded the urgency for medical interpretation needs as otherwise healthy individuals have had their health compromised."

Since it started in December, the interpretation and translation services have reached more than 200 individuals, Olivares said.  Work is underway to expand in the next few months "and to make it a sustainable program. We hope to do this by creating contracts with our local hospitals."

Olivares added, "The Flint water crisis is a man-made disaster that has critically affected the people living in the city of Flint.  The water is still contaminated, with no clear end in sight.Those with lead poisoning, especially the children, will continue to have social and medical needs for the rest of their lives."

Click here to support this and other UCC Disaster Ministries work in the United States.