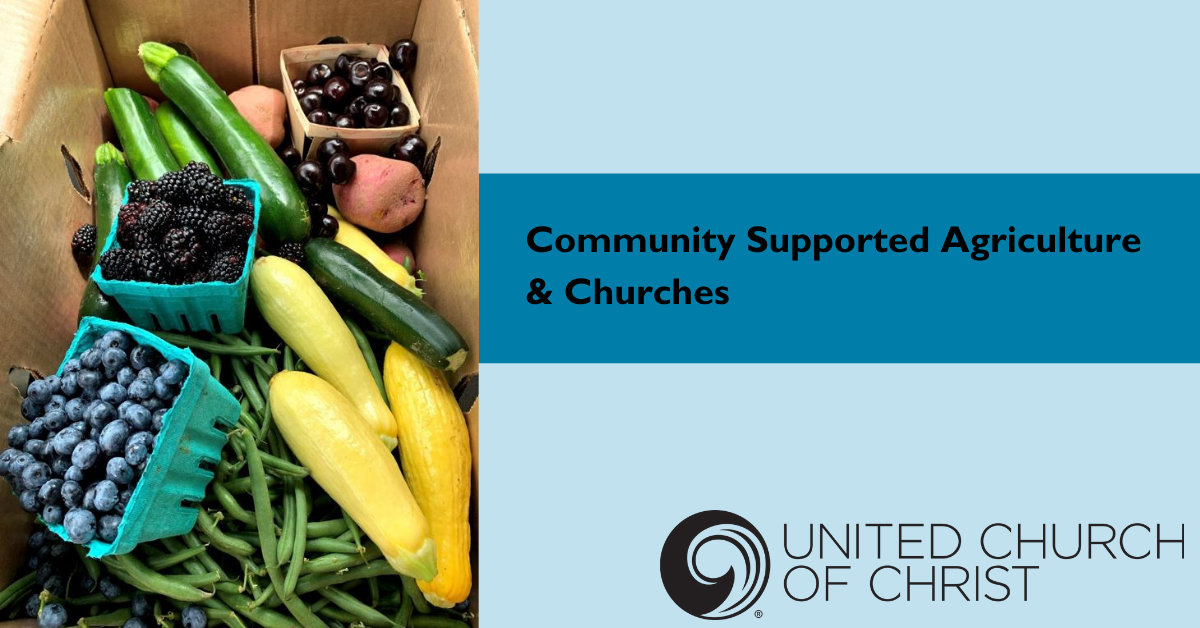 To begin the classes she teaches, author and activist, Anna Lappé will often ask students their last experience of nature.  Some will share their nightly walk with their dog, others will relate how beautiful the most recent sunrise, and still others will share their most recent hike.  Lappé then asks, “How many of you just came from lunch to class?”  Almost everyone in the class raises their hand.  Rhetorically, she pushes, “Why is that not your last experience of nature?”

In thinking about our accompaniment and advocacy for God’s good earth, we too often forget food as an important part of our spiritual practice and creating just environmental policy.

Shares of Community Supported Agriculture (CSA) are relationships offered by local farmers to their wider community.[1]  In exchange for a direct annual, monthly, or weekly payment from shareholders, farmers seek to provide food or food product that is grown or produced by them or by neighboring farmers.  Although not inherent to all CSAs, many CSAs enhance the relationship with their shareholders by offering tours, recipes, and opportunities for direct relationship with their farmers and their farm. Moreover, CSAs often offer educational opportunities about land, water, and animal resources.

Community Supported Agriculture shares offer an alternative economic model between people and their food. While the neo-liberal economic model touts trade advantage, access to product, and “cheap food” as its primary values, farmers who use CSAs depend on an economic model often based on relationship, transparent costs, and shared risk.

In most CSAs, members pay up front for the whole season and the farmers do their best to provide an abundant box of produce each week. If things are slim, members are not typically reimbursed. The result is a feeling of “we’re in this together.”  By having shareholders pay pre-season, farmers are able to market their food off-season and canvas their local community.  Receiving payment early in season also helps a farmer with cash flow.  Meanwhile, shareholders usually experience an overflowing abundance of fresh food from God’s good earth on a regular basis[2], extra touches[3] from farmers, sometimes surprises in foods they would have never eaten otherwise, and a transparency that lets the shareholder know how their food is planted, grown, cultivated, and harvested.

Through this direct, alternative economic model, shareholders support their local economies and have a relationship with a farmer to share in ethical agricultural policies that support community life, encourage bio-diversity, and treat animals, land, and soil as partners in the divine miracle of food.

The “hidden costs” in the neo-liberal economic model too often comes at the expense of nutrition[4], local economies, taxes to support industrial and chemical agriculture, the loss of subsistence farmers in other countries[5], and God’s creation itself.

I live in the south of Chile, in the ‘deep south’, and that area is a fantastic area for milk products. A few months ago, I was in a hotel, and there in the south, for breakfast, I was given a little packet of butter. I get one, and it is butter from New Zealand! I mean, if that isn’t crazy! And why? It’s because economists don’t know how to calculate real costs. To bring butter 20,000 kilometers to a place where they make the best butter, arguing that it is cheaper, is a colossal stupidity. They don’t take into consideration the impact of 20,000 kilometers of transport. What is the impact on the environment of that transportation, and all those things? In addition, it’s cheaper because it’s subsidized. So, it’s clearly a case in which prices never tell the truth. It’s all tricks, and those tricks do colossal harm. If you bring consumption closer to production, you will eat better, and you will have better food. You will know where it comes from. You may even know the person who produces it. You humanize this thing. But the way the economists practice today is totally dehumanized

Shareholders who choose CSAs are often making choices for farmers and farms invested in regenerative agriculture. Regenerative agriculture farmers know the soil and the land have inherent value. They practice farm diversity and crop rotation as necessary for their farming.  They also recognize that the primary values of food: its distinct taste, its abundant nutrition, the miracle of the way seed can be secured, regenerated, and returned to the soil for more food, and the way food brings us together as community.

In Anna Lappé’s book, Diet for a Hot Planet:  The Climate Crisis at the End of Your Fork and What You Can Do About It, she argues that food is the greatest protagonist for climate change.  Lappé points to the way that industrial/chemical agriculture transports food over great distances bathing that food in fossil fuels to get to market.  Within industrial/chemical agriculture’s methods and practices, great amounts of poisons are put into the land and air to control pests and deter weeds.

In chemical farming, fertilizers and pesticides are often used to create a massive volume of food product that is then too often produced for animal feed.  Chemical farming eventually depletes soil, making it less likely to fix nitrogen and provide a carbon sink to provide balance to earth’s atmosphere.  The soil needs to be seeded with ever-greater nutrients, like nitrogen and phosphorous, to replenish the soil.  Pesticides, herbicides, and nutrients then run-off into water systems and contribute to dead zones that are killing off marine life in massive ecosystems like the Gulf of Mexico and the Great Lakes.[6]  These toxic brews make their way into land, water, and air and not only contribute to dead zones where enormous amounts of fish are lost, but also impact the health of agricultural workers and destroy the long-term life of soil.

In the end, what I want and I think we all want, is good food. I will venture to say that I also want a free healthy school lunch guaranteed to every child in America, and that will cost $5 a day per child to pay farmers a decent price. That’s what I want. And I want to grow traditional corn without threat of genetic contamination or theft. And I would like to have water. [Carlo]Petrini (Slow Food Movement President)  reminded us of who we are, “ This is a movement which must be based on emotional intelligence. Bayer has bought Monsanto, but we are the multitudes and we are more powerful.”

In contrast, CSAs create spiritual practices around our shared relationship with the soil, the land, water systems, farmers, and food.  If we seek to craft our meals around the food we receive in a share, we learn to eat more intentionally and in-season with what the farm produces.  If we choose wisely, we provide the economic wherewithal for farmers who practice regenerative agriculture.  If we use the food from our share for our daily meals, we remember our connection to God’s good earth and how that food is central to environmental justice.

A big part of what I’m trying to do is to get people to think about how they can eat simply and authentically, and in the process, support local farmers or grow food at their homes if they have a little green space. 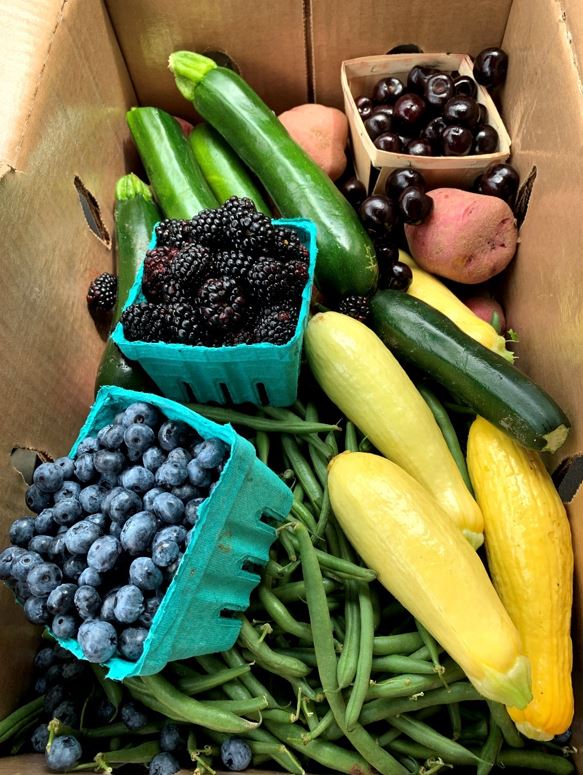 This article was written as a resource for the Kairos Call to Action which lists ten ways for churches to mobilize to address climate and inequality. Churches are encouraged to cultivate gardens, landscapes, and appetites in the struggle for justice.

Cultivate gardens, landscapes, and appetites in the struggle for justice.

[2] Personally, we have sometimes split our family’s CSA with up to three other families to keep up with the abundance of produce we receive.

[5] In fact, the passage of the North American Free Trade Agreement (NAFTA) and attendant commodity dumping by United States agricultural transnationals (a breaking of World Trade Organization law) destroyed the livelihoods of the rural poor in Mexico leading to a loss of up to 5 million agricultural jobs.  These losses, in turn, led to massive immigration as people left for places that were considered sources of trade power.