UCC Officers: What kind of America will we be?

The National Officers of the United Church of Christ issue this pastoral letter following the impeachment trial of President Donald Trump and his Feb. 5 acquittal, as expected, in the Republican-led Senate.

The National Officers of the United Church of Christ issued this pastoral letter following the impeachment trial of President Donald Trump and his Feb. 5 acquittal, as expected, in the Republican-led Senate. 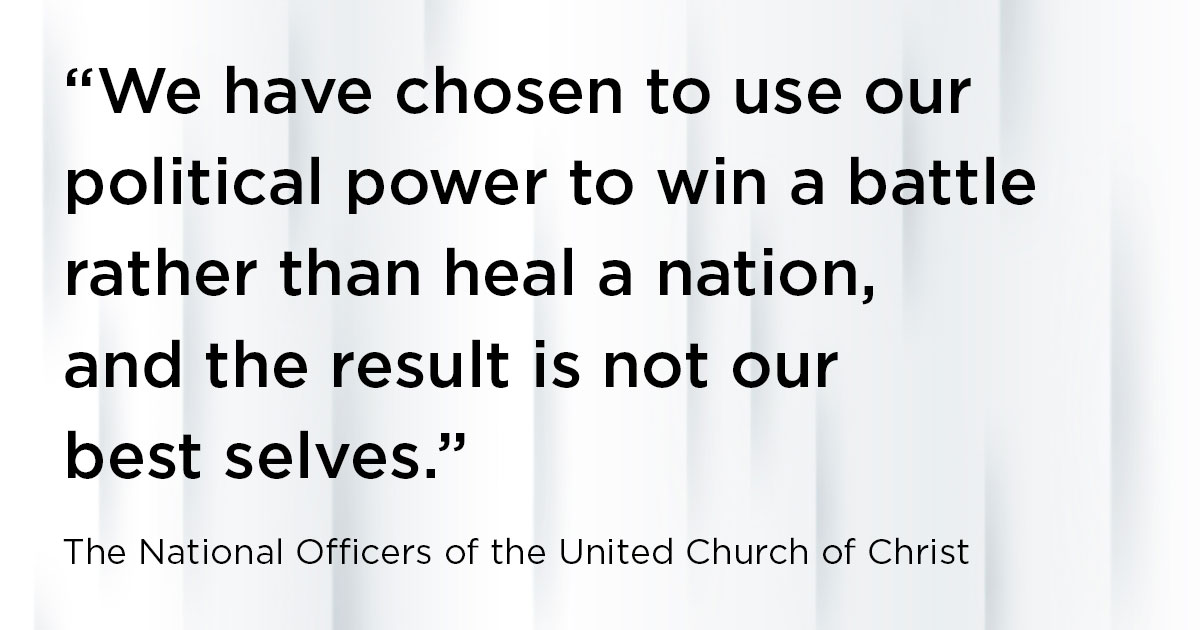 What kind of America will we be?

Once again, this persistent question is before us.

The impeachment of an American President is cause for lament.

No matter how one feels about the outcome of the Senate proceedings or where one’s political allegiances may reside, today is not a day of celebration. Today is a day for somber reflection on the gravity of the moment before us. Today is a day we must grapple with what it means to be a nation whose trust and civility have once again been compromised. Today is a day when the integrity of the highest leader of this nation was called into question, and those questions remain unresolved. When given the opportunity to seek truth on behalf of our country, Republican senators chose alliance with a leader rather than allegiance to the values and principles of our nation.

Although some of you may have found such actions reprehensible, it is not the task of the church to retry the case brought before the Senate. As people of faith, our charge is root work. Our mission is to wrestle with the internal conflicts of the soul that give birth to moments like this time and time again. It is not the call of the church to alienate those who have become increasingly entrenched in public discourse designed to divide us into warring camps of left and right, red and blue, or black and white. Although the Senate chamber would suggest otherwise, this division is not about the colors we wear but the values we hold. The church must call us to our higher selves, reminding us of the tenets of our faith and the courage of our convictions. In every sense that truly matters, we have all lost more than we can afford to live without.

The chasm between our profession of democracy and the praxis of beloved community is vast. Our faith in political systems and leaders to reach beyond partisanship and serve the needs of all the people is shaken once again. The imbalance of political power and people power persist. Our leadership lacks compassion for those who suffer among us, and daily they are instituting policies that abandon faithful stewardship of land and resources entrusted to us all by God.

As a nation, we’ve chosen idols over ideals and self-preservation over service. Increasingly the dark-skinned stranger is unwelcome among us, in spite of the generational debt that is owed them. We build cages to house children and deny healthcare to the poor. We have chosen to use our political power to win a battle rather than heal a nation, and the result is not our best selves.

In this moment the temptation will be to become hostage to the horrors of our present reality and believe that where we are as a nation, and where we’ve been as nation, is all that we will ever be. Yet God has not forgotten us, nor has God abandoned those God loves. There have always been courageous people of conscience who have been willing to walk all the way to Galilee to bring into being God’s vision of a beloved community, where the lion rests with the sheep and the prodigal daughters and sons come home to God again. The church is the keeper of that story and the story is long. In this moment we are reminded of the words of William Cullen Bryant: “Truth crushed to earth will rise again.”

But how will truth rise? 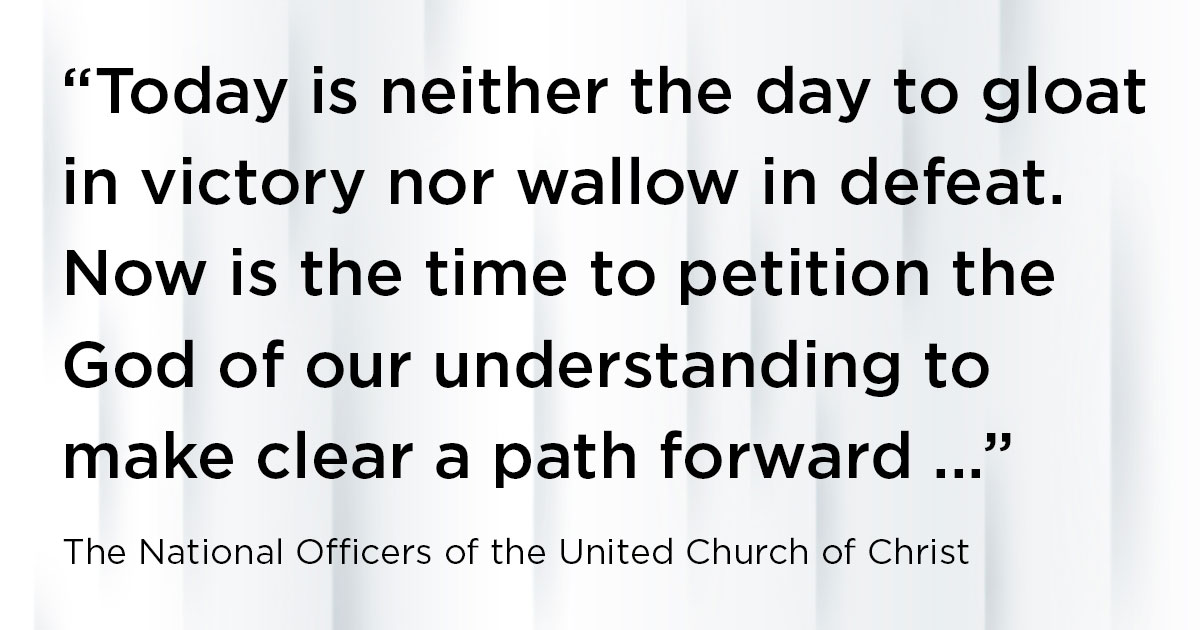 As the church stands in the shadow of the third presidential impeachment trial in the history of this nation, the church also stands in the light of those courageous freedom fighters, both black and white, who stood together and sat in together 60 years ago to affirm the dignity and value of all human kind.

The words of James Russell Lowell ring poetically true: “Truth forever on the scaffold, wrong forever on the throne.” Yet, let us not forget “that scaffold sways the future, and behind the dim unknown, stands God within the shadow, keeping watch above his own.”

It is the work of the church to sound the alarm and call us back, in truth and in alignment with sacred texts, to the difficult work of repentance, redemption and repair. We must remember HOPE has no formidable advisory and truth cannot be erased.

Today is the day neither to gloat in victory nor to wallow in defeat. Now is the time to petition the God of our understanding to make clear a path forward from the quagmire of deceptions, delusions and human disregard that has infected our governance and divided our union far too long.

Although we all are flawed, we need not fail.

We must acknowledge our deep disappointment in a process that lacked transparency. Yet, in the words of Rev. Dr. Martin Luther King Jr., we must accept finite disappointment, but never lose infinite hope.

The church must summon the moral courage to anchor ourselves in the unifying call of scripture that reminds us, although we have many differing parts, we are one body whose strength does not lie to the right of us or to the left of us, but rather in the midst of us.

With headphones and earbuds, virtual choirs will soon record Synod music from home

People want to sing. That's clear from the way they've turned out for four virtual United...

For the first time in 1,252 days, a Missouri father of five will spend the night under the same...