A United Church of Christ minister, one of 50 people being tracked and interrogated by the United States government for her humanitarian ministry at the border, speaks of love in this sermon. Investigative journalists at NBC 7 in San Diego have confirmed that the Rev. Kaji Dousa, senior pastor of the Park Avenue Christian Church, New York City, has come under surveillance for delivering support to asylum seekers at the U.S.-Mexico border.

A brave soul from the Department of Homeland Security came forward with a story that has rocked the country this week. They are keeping a dossier on journalists, activists and others, flagging their passports, in some cases, revoking visas, travel privileges in others, deporting as many as they can.

I saw the article and thought one of the blurred photos of the targeted people looked familiar.

It was, because it was my passport photo. With a yellow X that the most powerful government in the world drew across my face.

But none of us would have known if someone in the department, someone with significant access to information, hadn’t taken a very serious and personal risk to come forward.

The Centurion was a powerful soldier in one of the most powerful conquering forces in the world. He was accustomed to being in command. And while he was accustomed to getting what he commanded, he could not command his servant to be healed. Healing doesn’t work that way, of course. Because the illness will reach anywhere. It doesn’t care about your financial gifts or your job title or your immigration status or your marital status or anything else. You can have all the power in the world but there will be things you cannot command.

There is always someone else who is in charge of you. And the Centurion knew this. But he humbled himself, when he saw that his powers were limited. And when he saw the true authority to whom he needed to bow did not bear any military titles, something in him changed.

And Jesus saw it and loved him for it. The Centurion’s servant was healed.

I spend a lot of time with people whom the government issues guns and uniforms, particularly people from the Department of Homeland Security, especially from ICE.

For the ones who have spoken to me: I think that they know that I love them, too.

When I pray with the migrants who are vulnerable to their ICE quotas, whims and bad days, they know that I pray with and for them, too. They know this because they hear it. They know that we love and pray for them. And a lot of them hate us for it. It’s easier, see, to caricature someone you perceive to be your enemy. It’s harder to let them love you.

Jesus was a leader with a following who had powers that threatened the police state. (Not that I am comparing myself to Jesus)  But Jesus’ power and influence were palpable and dangerous because he had a strength that they could never touch.

And that strength was love. A love that could heal ANYONE. Even someone who would otherwise be discarded, replaced, deported. Jesus loved and told us we have to, too. But that love does not seem to be order of the day.

I look at the ways power is yielded in the land. And love exists – but it is certainly not in charge.

When I talk to the people the government issues guns and uniforms, one of the first things I point out is that they almost always have choices.

And if their job requires that they don’t do those things? Then they work for the devil and they need to quit.

Blow that whistle so it rings with truth.

Blow that whistle with the strength of a trumpet.

For the trumpet shall sound!

And we will be changed!

We will not change. If you stay silent.

Follow the Centurion to receive God’s love and open up avenues to healing the world over.

Follow Jesus and realize that evil overlords will do nothing for you but drag you down.

Love God and find yourself loving your neighbor radically, across borders, even in the company of your enemies.

I say all of this to preach it to myself. Because I’m scared. This work we’re trying to do is dangerous and necessary. But I’m reminded of this truth that I repeat again and again and again:

No weapon formed against me shall prosper.

Even if that weapon is wielded by the most powerful government in the world. 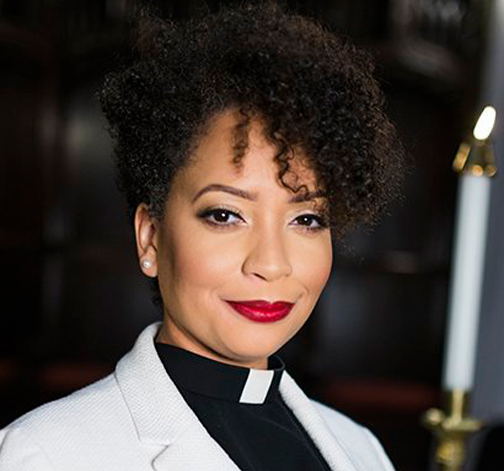 Apparently ICE and Customs & Border Patrol agents are surveilling me. They have a dossier with my personal information. My family’s information. They record my words.

So if you’re listening, I have something to share:

It’s not too late for you.

I. Am. Defiant.
But that defiance is not against you. It’s against anyone who would take me – a member of the clergy – and try to silence the words God gives me to share.

Know God to be your true supervisor, the highest authority in your life. And remember that God has already chosen sides in the struggles of the oppressed. Where do you stand?

With the Centurion’s friends who didn’t know Jesus? Or with the Ruler of ALL nations?

Read the statement issued by the UCC Executive Leadership, ‘We Will Not Bow!’