To the congregations of the United Church of Christ and the wider church in all its instrumentalities: 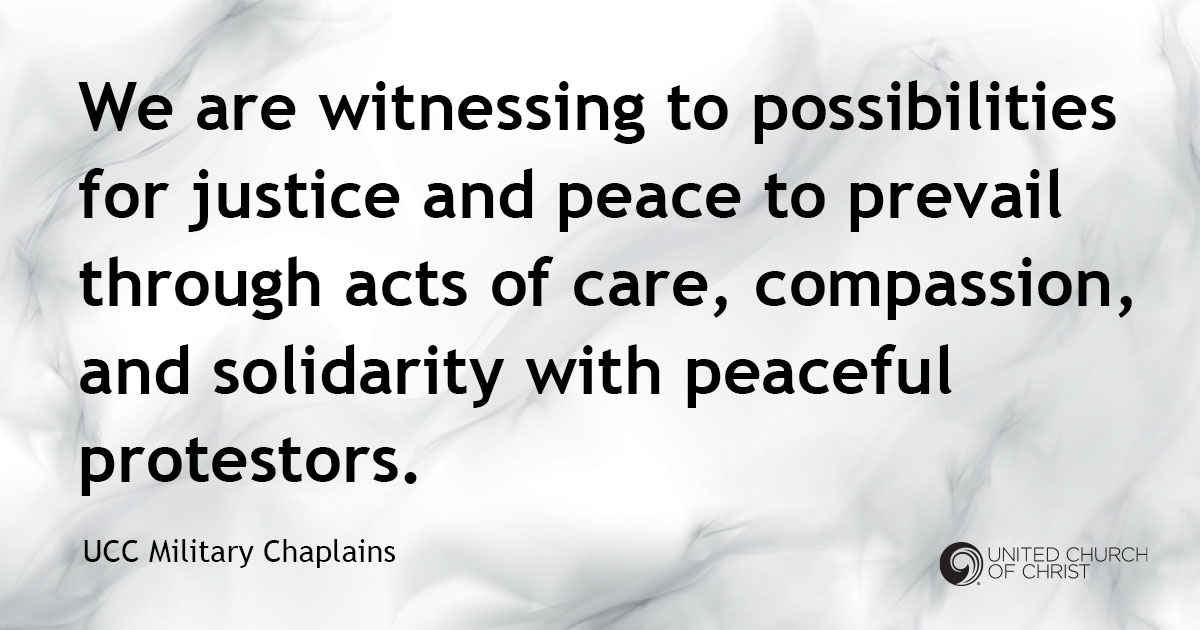 Grace and peace to you from the God of our Lord Jesus Christ. In this moment of heightened tension between our government and our people, and especially between the military (in particular the National Guard) and civilians, we, the undersigned, thought it necessary to speak directly to you as chaplains serving in the military on your behalf.

We, too, have watched in horror as our fellow service members were immorally, if not illegally, ordered to attack our fellow Americans in Washington, D.C. outside St. John’s Episcopal Church in Lafayette Square, Americans who were peacefully protesting injustice against black, indigenous and other people of color in our nation. We were appalled when our fellow clergy were driven from their house of worship while they were actively standing in solidarity with and caring for protestors.

We lament with you that our fellow service members are being put in potentially unlawful, unconscionable, and no doubt, morally injurious positions. We, too, watched as our military was used against our fellow Americans in order to oppose their most basic freedom of assembly. We recognize the stress this is putting on the bonds of trust between our nation and our military. We see the harm it is causing to our service members, you, and the very the fabric of our nation.

We want you to know we stand as guardians of the consciences of the service members in our care. As chaplains, one of our roles is to help our service members as they wrestle with moral challenges. We are helping them as they prayerfully seek to obey only moral, ethical, and legal orders. Many of us are serving currently activated National Guard units and we are actively encouraging our soldiers to de-escalate tense situations. We are witnessing to possibilities for justice and peace to prevail through acts of care, compassion, and solidarity with peaceful protestors. We are prophetically interceding on behalf of both the service members in our care and their fellow Americans in this hour of deep pain.

We remember that our Lord Jesus was tortured and killed by the state. With you, we reject the use of state power to terrorize, oppress, and kill black Americans. Chief Master Sergeant of the Air Force Kaleth Wright’s recent social media post makes abundantly clear that our black service members are not free from the ever-present threat of ideological, institutional, and interpersonal racism no matter how honorable their service is or high they rise in the ranks. We think it is important that you know we stand with them in righteous rage and lamentation.

With fear and trembling, we join with you in praying that God’s Spirit would move among us. We know there is no easy path forward. The enduring legacy of slavery and Jim Crow remain open and painful wounds. Our black brothers and sisters have been forced to bear the marks on their bodies and in their souls. We want you to know that we are committed to doing all that we can among the people we have been called to serve. We, too, stand in solidarity with all those peacefully marching for justice, not just in Spirit but for many of us, in the streets.

In the end, we remain steadfast in our faith that the Word of God cannot be silenced or held captive. As those entrusted with the proclamation of the Word and sent by you to our military to do so, we affirm and echo the words of the Rev. Dr. Martin Luther King Jr. and the prophet Amos: “we will not be satisfied until ‘justice rolls down like waters, and righteousness like a mighty stream.’”

The UCC currently endorses chaplains in all branches of service, Active Duty, Reserve, and National Guard.